Only in Australia could a wisecracking superfan receive such adulation. Stephen Harold Gascoigne, known as Yabba, was the SCG’s barracker par excellence in the 1920s and Thirties. You’ll still hear several of his one-liners today – “Send ‘im down a piano, see if ‘e can play that” – and he commanded such respect that visiting captains would shake his hand at the end of a series. When The Hill was replaced with seating in the early Nineties the new area was named Yabba’s Hill, and in 2008 a bronze statue was unveiled in the Victor Trumper Stand of Yabba doing what he did best.

To have your country’s national cricket stadium named after you is an honour bestowed on few; for it to happen before you’ve even hung up your boots is rarer still. St Lucians are understandably proud of Darren Sammy. He remains the only cricketer from the island to play Test cricket and when he lifted the World T20 for a second time earlier this year, the Beauséjour Stadium was renamed the Darren Sammy National Cricket Stadium. That his sometime Windies teammate Johnson Charles also had a stand named after him may have taken some of the gloss off.

Graham Gooch: Lord of Leytonstone. It just wouldn’t be right if he weren’t duly recognised in his county’s capital. The bronze statue, which depicts Gooch in a grille-less helmet working the ball into the leg-side (our picture shows editor Phil Walker imitating the shot), has been standing proud in the middle of a Chelmsford housing estate since 1992, the year Essex last won the Championship. 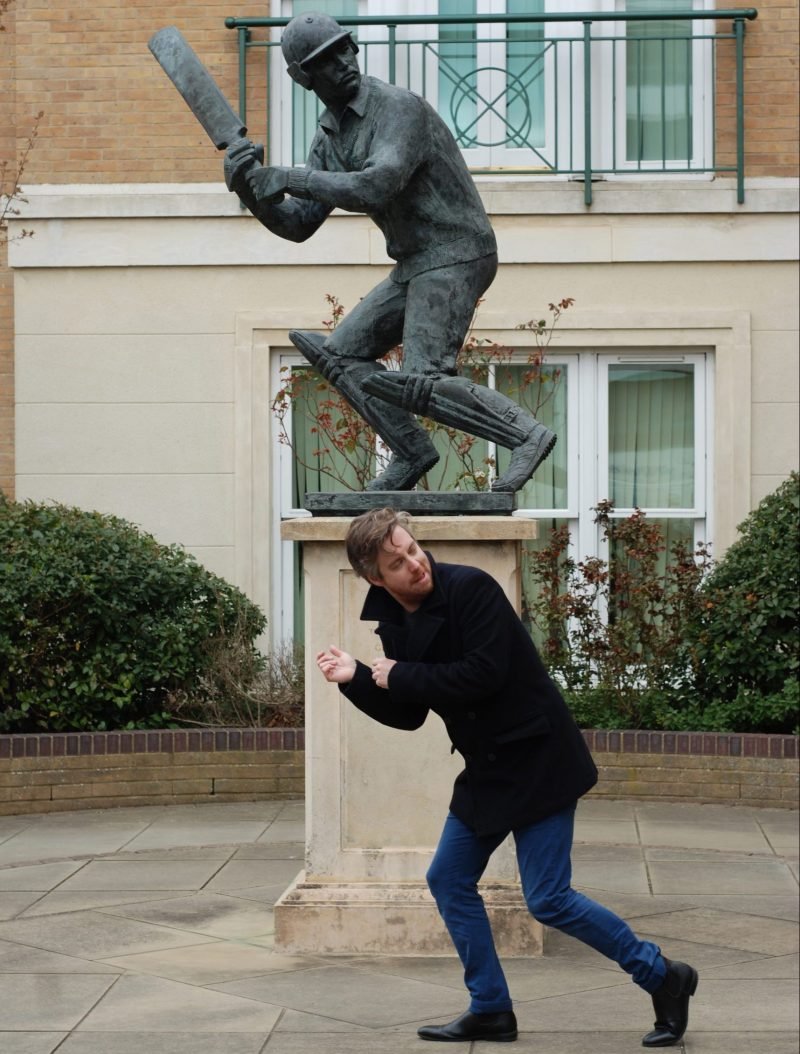 After a quarter-century of dedicated umpiring service, Dickie Bird’s hometown of Barnsley celebrated his career by erecting a statue of him in the town centre. A lovely touch, but somewhat tarnished by revellers who took to hanging condoms, knickers and even pumpkins on his outstretched finger. After Dickie was seen cleaning the debris away himself of a Saturday morning, it was decided enough was enough and a five-foot plinth was built to put the distinguished digit out of reach. 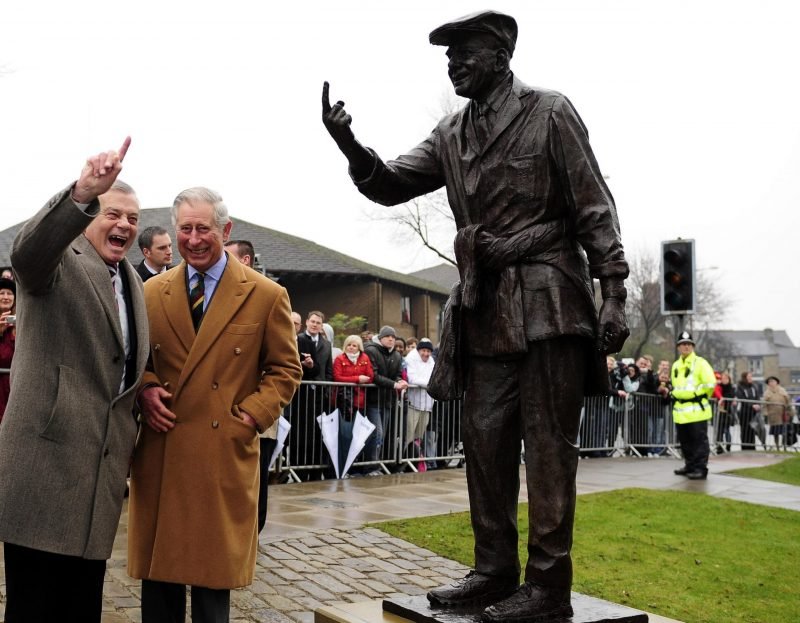 6. James and the giant reach

The words of Trinidadian writer and political activist CLR James have been felt across the world, most notably through his seminal 1963 cricket-heavy memoir, Beyond A Boundary. So much so that during Hackney Council’s Anti-Racist Year in 1985 the East London borough decided to rename Dalston Library after the great man, despite there being no personal ties between James and the area. When a new library was opened in 2012 the council intended to drop James’ name but a local petition ensured the decision was reversed.

As one of the first cricketers to appreciate the commercial opportunities his fame afforded him, Denis Compton would have fancied a piece of the luxury collection of apartments and penthouses currently being built in St John’s Wood. ‘The Compton’ is situated just a stone’s throw from Lord’s but you’d best get saving if you want in. One-bedroom flats start at an eye-watering £1.1 million.

When Nottingham City Council invited nominations for famous faces to have a tram named after them a month on from England’s demolition of the Aussies at Trent Bridge in 2015, there was only going to be one winner. Local boy and chief destroyer Stuart Broad won the vote hands down, following in the footsteps of Brian Clough, Carl Froch and Torvill and Dean. It was especially nice for Broad to have some public transport named after him. He’s never been much of a walker.

10 times the result wasn’t the only thing that mattered.https://t.co/rM1mfM7fOX

Vinoo Mankad’s reputation has been besmirched somewhat through his connection with the underhand method of dismissal named after him but the left-arm spinner and opening batsman is perhaps India’s greatest all-rounder behind Kapil Dev. In his home state of Gujarat, Mankad remains an icon and the statue which stands at Jamnagar’s intersection and captures him mid-delivery is used by fathers to teach their sons the perfect grip for a finger spinner.

Twin brothers Alec and Eric Bedser were never far from each other’s side and in death all that stands between them is the Bedser Bridge in Woking. Sir Alec is remembered as one of England’s greatest seamers, taking 236 wickets in 51 Tests, while all-rounder Eric played alongside his brother at Surrey for more than 20 years. Sir John Major, who grew up watching the Bedsers at the Oval, unveiled statues of the pair, which stand at each end of the bridge, in 2015.

1. Not so steady Eddie 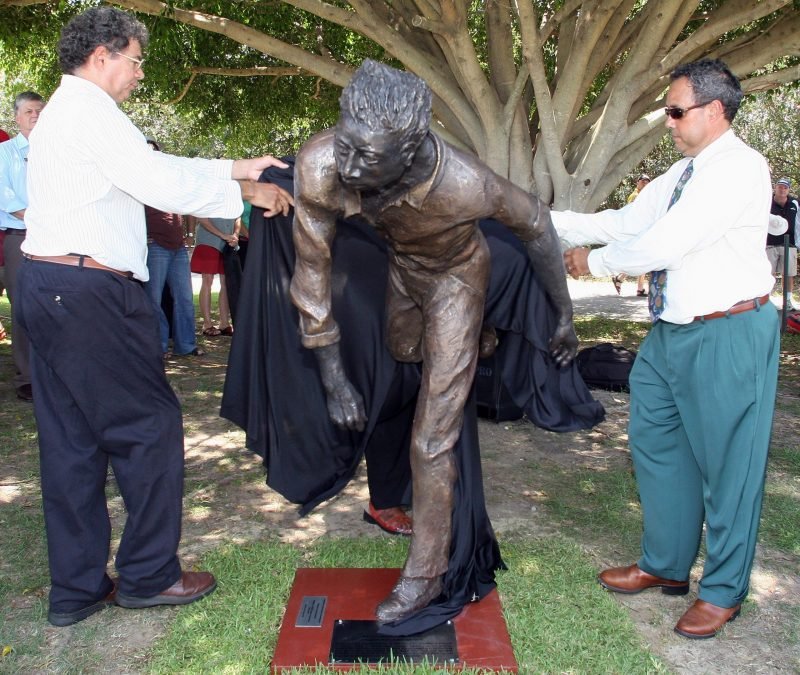 A statue of Eddie Gilbert is unveiled by Wayne Coolwell and Larry Budd during the Cricket All Star Fan Day at the Allan Border Field, Brisbane in November 2008

Slender and standing at 5ft 7in, Eddie Gilbert did not look like your average fast bowler, but then he wasn’t your average cricketer. Born in Queensland in 1905, Gilbert was one of the first Aborigines to play professional cricket and his first over in first-class cricket, described by Don Bradman as the fastest he ever faced, is the stuff of legend. The story goes that Gilbert knocked the bat from The Don’s hands with a sharp-rising delivery before getting him caught behind for a duck later in the over. A suspect action meant Gilbert never played for his country but a statue recognising his groundbreaking career was unveiled at Allan Border Field in Brisbane in 2008.