“Jimmy [Anderson] has been the main man and I play second fiddle,” said Stuart Broad in 2016. “I’ve quite rightly and more than happily been in Jimmy’s shadow.”

But when the rare opportunities have come along for Broad to be top dog, the less celebrated half of England’s greatest ever bowling partnership has generally seized them with relish.

When an out of sorts Anderson was dropped for the first Test of England’s 2009 tour of the Caribbean, a 22-year-old Broad, playing his 11th Test, responded by taking his maiden five-wicket haul. Six years later, when Anderson was ruled out of the Boxing Day Test at Durban through injury, Broad led the attack heroically, returning match figures of 28-11-54-5 in a comprehensive victory.

But his most famous Anderson-less performance of course came earlier in 2015 at Trent Bridge. Shorn of their attack leader at his favourite hunting ground, and with the Ashes thrillingly poised at 2-1 in England’s favour with two to play, Broad produced the best Test figures by a fast bowler since Devon Malcolm made South Africa history at The Oval in 1994.

Broad had been solid but unspectacular up to that point in the series, taking just three wickets in the previous Test at Edgbaston. After 19 balls at Trent Bridge, Broad already had his five-for.

“With experience, I’m aware when it’s my day,” said Broad when trying to explain his uncanny knack of delivering match-exploding spells. “I have little checkpoints. I pick my knees up like a show pony, making sure I’m running in, staying big at the crease. And when all those are ticked, you think: ‘I’m feeling pretty good, I’m getting it to move around, there’s bounce… let’s get the fielders in place’.” 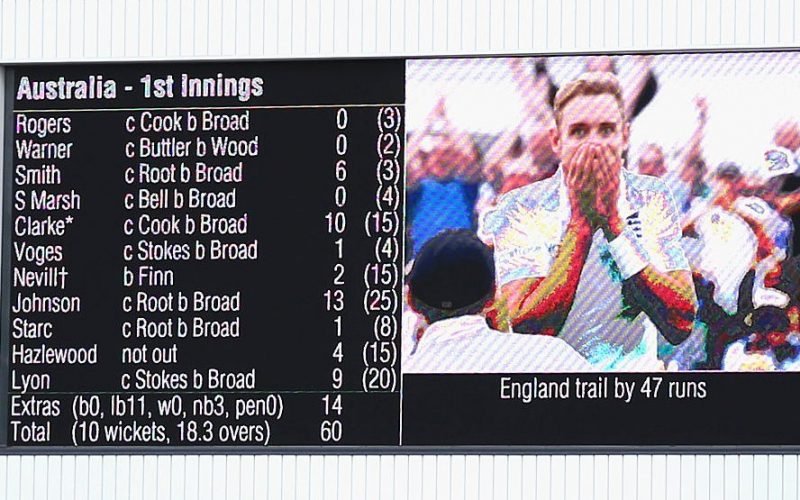 On this particular day, with all the checkpoints ticked off, England’s fielders matched Broad’s brilliance – all eight wickets in his extraordinary 57-ball spell would come courtesy of catches in the slip cordon.

Chris Rogers was the first to go, to the third ball of the morning, before Steve Smith followed three deliveries later, sending a thick edge through to Joe Root at third slip after being squared up.

There was a delay to proceedings when Mark Wood dispatched David Warner in his first over, as Michael Clarke, who had demoted himself to No.5, scrambled to get his pads on.

When Shaun Marsh poked to second slip and Ben Stokes clung on to a worldie at fifth slip to dismiss Adam Voges, spinning 180 degrees to face third-man as the ball nestled in his right hand, the action began to take on a dreamlike quality. Broad – mouth agape, eyes out on stalks – couldn’t believe what he’d just seen from Stokes.

A wild drive from Clarke, taken smartly by Cook above his head, took the score to 29-6 and made Broad the first England bowler to take five wickets on the first morning of a Test since Sydney Barnes in 1913.

When a shell-shocked Peter Nevill left a straight one from Finn, it was left to Broad to complete the rout, Mitchells Starc and Johnson fending to third slip before Nathan Lyon gave Stokes his second catch of the innings. Australia all out for 60. In 18.3 overs. Clarke’s side had a lost a Test they needed to win in a little over 90 minutes of play.

“A quite incredible cricketer,” said Nasser Hussain on commentary. “When he’s on song, there is no one better. He just delivers spells from nowhere.”

A peach of a delivery to set the ball rolling. Coming around the wicket to the left-hander, Broad brings the ball in on the angle before nipping it away, taking Rogers’ outside edge and giving Cook a simple chance at first slip.

It’s Rogers’ first and only duck in Test cricket and makes Broad the fifth Englishman to reach 300 wickets.