Before the Cook-Strauss and Sehwag-Gambhir partnerships reached their pinnacle, Andy Afford and Chris Seal penned down Test cricket’s other great opening pairs.

Although easily the lowest average for a great opening pairing, the left-left combination of Bruce Edgar and John Wright saw New Zealand away to many a steady start during the country’s strongest period as a Test-playing nation. With a Black Caps all-time great in Andrew Jones (Test average 44.27) at first drop, and the legend that is Martin Crowe lurking at number four, Wright and Edgar’s contribution cannot be underestimated.

With pitches in New Zealand, at that time, favouring a seam bowling attack boasting Richard Hadlee, Ewan Chatfield and Lance Cairns, negotiating the moving ball was the doughty pair’s forte.

Edgar, a durable and unflustered southpaw, offered a low-risk, maximum effect quality to his side. Whereas John Wright – all idiosyncrasies, affectations and neuroses – afforded the partnership a human face. Both players would be good enough to rate in their country’s best ever XI. As a pairing, no seaming new ball has been more efficiently blunted.

Playing on difficult pitches for an unfashionable and unfancied Test nation, Edgar and Wright were the first men to successfully secure a foothold for their side.

In Mohsin Khan, one of the first cricketers with a Bollywood wife, and Mudassar Nazar, one of his country’s most respected performers, Pakistan had an opening pair spanning the old and new of its best traditions.

Mudassar was orthodoxy personified, with a technique honed by multiple seasons in the English leagues. Mohsin Khan, all film star looks and easy deflections. Neither player was the tortoise and neither the hare; their partnership was successful due to steady accumulation rather than expansive strokeplay. Mohsin was happiest with the ball coming on to the bat, whilst on the ‘snot and sand’ pitches of mid-Eighties Pakistan, Mudassar’s safety first approach – and popularity with local umpires – took some shifting.

Dependable, durable and with flair, at a time when Pakistan had a reputation as soft touches if conditions were less than favourable, if any pair put a marker down for the future direction of a cricketing nation it was Mohsin and Mudassar.

Cambridge graduate Majid Khan’s batting style owed more to the green fields of England than the cricket grounds of Pakistan. In partnership with Sadiq Mohammad, the only left-hander of five famous cricketing brothers that included Mushtaq and Hanif, Majid became his country’s first cricket idol.

Sadiq, a flamboyant cutter and puller, and Majid, all footless drives played on the up, gave an emerging side what it needed most – stability and personality at the top of the order. Later, the safeguarding of a middle order boasting Zaheer Abbas, Javed Miandad and Imran Khan became more a priority than a wish.

A nation’s cricketing history summed up in a single partnership – history and lineage in Sadiq, the new world flamboyance and undoubted class of Majid Khan.

“In the end, we ended up with this admittedly odd XI.”

From Imran to Zaheer, @ojerson8 picks a team comprising only of cricket players with the name Khan.https://t.co/86TKWd6oPn

Michael Atherton began his Test career as Graham Gooch’s reached its peak. This happy collision spawned a five-year partnership that dominated and resisted in equal measure.

The New Zealanders and in particular the Indian tourists of 1990 felt the full force of this classic reworking of ‘fire and ice’ as Atherton made a magnificent 151 not out against Richard Hadlee and his supporting cast and then both openers dealt with Kapil and Co. during a golden summer.

Gooch, despite claiming he ‘only had three shots’ was one of the world’s best in this period, and as Atherton quickly grew into the obdurate yet classy Test player he was destined to be, the pair shared some great moments. To beat England during their watch, you had to get both of them out. And neither went lightly.

When all around them were struggling, Gooch and Atherton encapsulated perfectly, in their partnership, their own personalities and that of their sporting nation. Bulldog spirit and cussedness personified.

Next on our list: Graham Gooch’s remarkable 154 not out.

Against an attack of Ambrose, Patterson, Marshall and Walsh, the England captain carried his bat and hit 61.1% of his side’s runs. @Yas_Wisden revisits the masterpiece.#1990sinReviewhttps://t.co/MVANgKbULL

A tall left-hander trampling all over the bowlers on the front foot, and a short right-handed back foot merchant – sounds like the perfect combination, doesn’t it?

And so it proved as Graeme Smith, the young captain, and Herschelle Gibbs, the mercurial rebel, became South Africa’s public face of the recent past. Smith, with his overwhelming bottom hand grip, would whip balls through square leg, as Gibbs hovered on the back foot, pouncing on any width.

England felt their powers in the 2003 series, leading to Nasser Hussain’s resignation as captain. But their best effort saw the pair post a monstrous 368 against Pakistan early in the same year. And even when separated as an opening partnership by Boeta Dippenaar during the epic one-day international against Australia at The Wanderers in 2006, they still managed to produce something special together. During the incredible 434-run chase at Johannesburg, they put on 187 in 21 overs, something which can only be described as ‘not bad’…

Not always reliable, particularly towards the end of their stint together, but when playing well were one of few pairings that seemed to be able to fire simultaneously. And they both, together, had a penchant for ‘going big’.

In Marvan Atapattu and Sanath Jayasuriya, Sri Lanka had for the first time in their existence an opening pair that could travel the world and trouble the best. Atapattu, obdurate in defence and relentlessly presenting the full face of the blade, even in attack; ensuring the ball remained glued to the carpet; and Jayasuriya, a free spirit, rarely conforming to any of the above.

A pair to be reckoned with and one of the best illustrations of contrasting styles complementing each other perfectly.

Little and large. The burly, barrel-chested Queenslander, and the diminutive flyweight from Perth, Hayden and Langer smashed and ducked their way to cricket immortality over a seven-year period.

Both players spent time out of the side. Langer had been dropped from the number three slot for scoring too slowly, but came in to replace the flamboyant but erratic Michael Slater in the 2001 Ashes series, promptly scoring a hundred. He joined Hayden, who had established himself around the turn of the century after five years in the wilderness. Both men were making up for lost time. They were never able to scale the heights of Lawry and Simpson’s 382, but they passed the hundred mark 14 times and scored at such an alarming rate that the game often very quickly ran away from the fielding side.

At times it looked as though Langer was riding a wave of adrenaline, and that Hayden was arrogantly disrespectful of the bowling. But it was this relentlessly physical, macho approach that made them so good as a combination. Whether smashing bowlers down the ground or absorbing some blows from the quick men, they never took a backward step. Another classic left/left combo.

Both men returned to the Test arena after years in the wilderness. Both came back bigger, better, stronger, faster. No pairing in the modern era has met force with force with quite the same air of machismo. 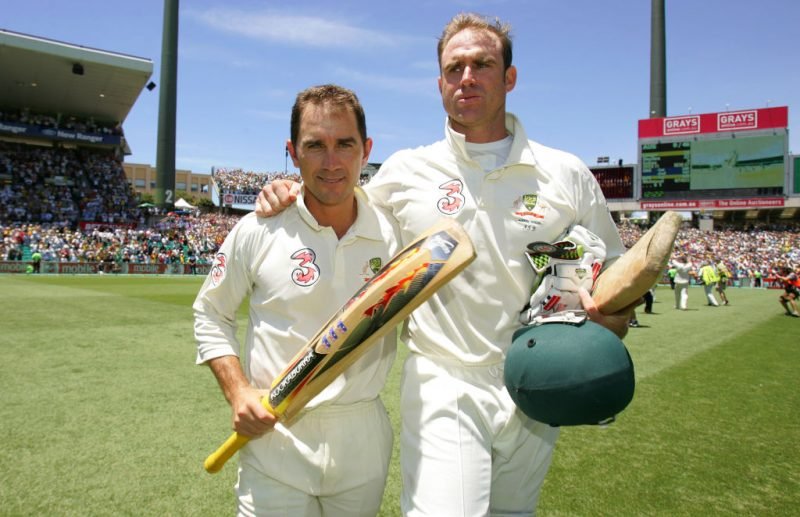 Hayden and Langer averaged 51.44 as a partnership

The stats don’t lie. Fifteen hundred-run partnerships in only 38 Test innings, and a golden period of six years during which they averaged nearly 88 together make Hobbs and Sutcliffe the partnership that has withstood record attempts in the same way Sir Don’s average will never be challenged.

I suppose when you put the most prolific first-class cricketer ever, in Sir Jack Hobbs, together with a man of sublime ability, like Herbert Sutcliffe – a man whose Test average never went below 60 – you might expect things to go well.

Surrey batsman Hobbs had made his Test debut in 1908, but only when Yorkshireman Herbert Sutcliffe played so well on a ‘sticky one’ in the Test trial of 1923 did he find his perfect partner. In 1926 the pair added 172 on a wet wicket at The Oval against the Australians, Hobbs making an even 100, Sutcliffe reaching 161, and the Ashes were won.

Bizarrely dropped in 1935, Sutcliffe was replaced by Len Hutton, meaning his star shone relatively briefly. But Hobbs had by then reached over 60,000 first-class runs and an extraordinary place in the game’s history.

Statistics set and numbers generated that will never be bettered from the top of the order. 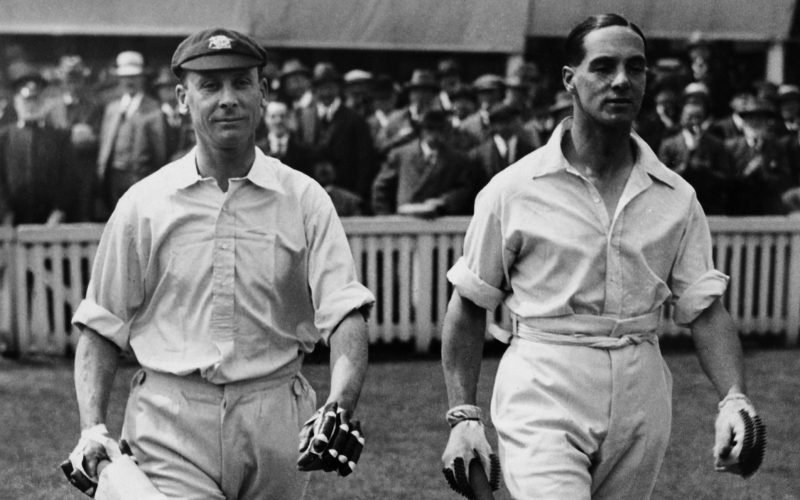 Hobbs (left) and Sutcliffe were involved in 25 fifty-plus stands

Thirteen years and nearly 6,500 runs against the new ball is an incredible achievement. They may not have the best average of opening partnerships but in many people’s eyes they are the best in world cricket history.

Both right-handed, so without the classic advantage of a left and right pairing, both went on to be immortalised as West Indian legends. Gordon Greenidge and Desmond Haynes came together at Port-of-Spain against Australia in 1978, and after putting on 87 in their first innings, they never looked back. As a pair Haynes, an outgoing Bajan, and Greenidge, more reserved and often based in England, weren’t the best of friends. But a chemistry existed when they batted.

Haynes was the more pragmatic technician, whereas Greenidge had a brooding intensity. He was murderous when roused – offering his trademark pull shot to the short ball, front foot raised to knee height as the ball skated to the square leg fence – dismissed with an air of ‘don’t bowl there to me, son’.

Some argue they would have struggled against their own, but what we do know is that they coped well enough with Lillee and Thomson, Imran Khan, Kapil Dev, Botham and Willis with no bother at all. Nuff said.

Authoritative, manly, muscular, unyielding, unflinching – the West Indies of the 1980s distilled in a first-wicket stand.

Mark Taylor had successful opening partnerships with Geoff Marsh, father of Shaun, and also David Boon, father of the modern moustache. But his coupling with young dasher Michael  Slater created a dynamic different to these other pairings.

A left/right combo that looked to rotate the strike, but also, in Slater, someone who was capable of taking on the opposition’s best new ball bowlers and clipping them around the ground. Slater typified the type of player that the bowling side must dismiss early. Taylor, whose powers of concentration and calm decorum made him an excellent captain for his country, was more a gatherer than blaster of runs.

Taylor, good on the back foot, and by dint an expert cutter and puller. Slater more complicated as an individual yet more straightforward in method, looking to get forward at every opportunity in search of the drive, but always drawn to width full or short – who could forget his vicious square cut against Phil DeFreitas first ball of the 1998/99 Ashes series? In classic Slater style it set the tone for what followed.

Statesmanlike authority mixed with terrier-like enthusiasm made for one of the game’s most explosive combos.