The death of Martin Crowe from cancer in 2016 brought tributes from around the cricket world. His Wisden Almanack obituary profiled a brilliant batsman and a complex man.

In the second half of the 1980s, Martin Crowe had a claim to be the best batsman in the world. With his upright elegance and classical technique, he was certainly the purists’ favourite. But he was no mere aesthete: many of his 17 Test hundreds for New Zealand were made in hostile environments.

Crowe’s immaculate appearance and unflappable demeanour made it appear as if the life of an international sportsman came easily, but – in his playing days at least – he could be intense and moody. “Martin was a sensitive man,” said his former team-mate Jeremy Coney. “He felt things keenly, was strongly opinionated and quick to take offence, so he polarised people.” Later, Crowe gained perspective on his complexities and, in a sometimes self-lacerating second autobiography, Raw, traced many of his problems back to being thrust into top-level sport in his teens. By his own admission, he was “the record holder for grievances”.

"He was very serious about his game and very analytical. Sometimes, you worried he was too keen to be the perfect batsman."

An original thinker, Crowe was always ready to challenge orthodoxy. His captaincy brought innovation to the 1992 World Cup, where New Zealand opened the bowling with a spinner, Dipak Patel, and the batting with a pinch hitter, Mark Greatbatch. They might have won the trophy, but Crowe was injured while making 91 during the semi-final against Pakistan, and off the field as his team lost their way against Inzamam-ul-Haq. After retiring, he made the transition to writing. His columns on ESPNcricinfowere frequently trenchant, always thoughtful and never routine. He wrote with empathy about Jonathan Trott’s withdrawal from the 2013-14 Ashes, and in Wisden 2014, he vigorously attacked the sledging that had scarred that series: “The truth is, we have all been guilty of taking cricket too seriously.” He responded to the death of Phillip Hughes later that year with a heartfelt appeal for a more compassionate game.

Crowe was born in Auckland, with cricket in his blood. His father Dave had appeared for Wellington and Canterbury, and his mother Audrey excelled at many sports; the family bookshelves were lined with Wisdens. His brother Jeff was four years older, but the two quickly became ferocious competitors at whichever sport they tackled. At Auckland Grammar, Martin was in the rugby XV alongside future All Black Grant Fox, and played tennis and golf to a high standard. But cricket was his strongest suit, and he was fast-tracked through New Zealand age-group teams.

At 17, he made a fifty on his first-class debut for Auckland, earning a scholarship to Lord’s with the MCC Young Cricketers. He came under the shrewd guidance of Don Wilson, who tightened up his technique and added to his education, telling Crowe: “No one remembers 60, lad, only big hundreds.” Early in his stay – in bitter May weather – he made a brilliant century to take the Young Cricketers to victory against a strong MCC team, finishing the match with a six into the Tavern Stand. “When he arrived, he had an outsize determination to be No.1,” wrote Wilson, “and nothing was going to stop him.”

In January 1982, Crowe scored his first century for Auckland; less than a month later, he was making his Test debut, against Australia at Wellington. It was an unhappy baptism: in a rain-ruined match, he did not get on the field until the fifth day, was promptly hit on the head twice by Jeff Thomson, and run out for 9. He made just 20 in four innings in the series, and was given a chilly reception from colleagues who resented his promotion. 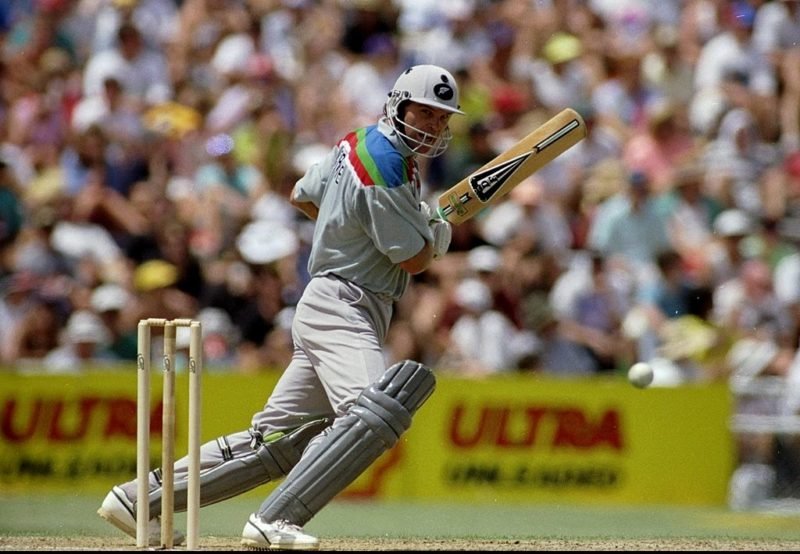 “Greg Chappell and Rod Marsh were nicer to me than my own team-mates,” he said. His figures improved in England in 1983, and he hit his first Test hundred, against England at Wellington, the following winter. By now, his brother Jeff was also a member of the New Zealand team, to the undisguised delight of their father, who told one of his former coaches: “You said I’d never make a Test player – well, I made two.” The brothers played 36 Tests together.

A watershed in Crowe’s development came in 1984, when he stood in for Viv Richards as one of Somerset’s overseas players. He moved in with Ian Botham, but got off to a shaky start, including five consecutive single-figure scores. Things improved in June, when he made over 700 runs, and by the end of the season, he had 1,769 at 53 in the Championship, and 2,620 in all formats. One turning point was an unbeaten 70 out of 192 against Leicestershire, and Andy Roberts in full cry; another was finding his own accommodation. According to Vic Marks, the Somerset all-rounder: “We met him in New Zealand the previous winter, and Both said, ‘You must come and live with me,’ which was a hard invitation to turn down. After about three or four weeks, when he had hardly scored a run, he plucked up the courage to say: ‘I don’t think this is going to work.’

“I really admired him for doing that, and when I asked him about it, he said he told Both when he was in the bath. He reckoned there wasn’t much he could do about it from there. He was very serious about his game and very analytical. Sometimes, you worried he was too keen to be the perfect batsman. He threw himself with great energy into the role of being a guide and mentor to the younger players.” Crowe was named a Wisden Cricketer of the Year, and admitted: “I probably learned more in six months than in six years before.”

Crowe’s immaculate appearance and unflappable demeanour made it appear as if the life of an international sportsman came easily, but – in his playing days at least – he could be intense and moody.

The experience benefited a Test career that until now had been no more than promising. His breakthrough innings came in Georgetown in April 1985, when he made 188 against a West Indies attack including Malcolm Marshall, Joel Garner and Michael Holding. Seven months later, he made another 188, at Brisbane, with New Zealand going on to win a series against Australia for the first time. And in March 1986, he made a brilliant 137 against the Australians at Christchurch, returning to the crease after a blow on the head from Bruce Reid. “He simply eviscerated the bowlers to every sector of Lancaster Park,” Coney recalled. “He looked angry with himself. He saw the injury as his error – and he wanted to show the Australians that.”

Under Coney’s sparky captaincy, and with Richard Hadlee at the height of his powers, New Zealand earned their first series victory in England, in 1986, with Crowe making a masterly 106 at Lord’s. He was a joy to watch – “part dancer, part fencer, part keen-eyed executioner: Martin didn’t do ugly,” according to Coney. Back home, he proved the point with 328 runs at 65, as New Zealand came from behind to draw a three-match series against West Indies, then enjoyed another productive time in Australia.

He returned to Taunton in 1987 to be greeted by a sulphurous atmosphere following the departures of Botham, Richards and Garner. But his commitment won admirers. “He was still brilliant, but a bit more self-contained,” said Marks. “He had been playing Test cricket for five years by then, and there was not the same energy.” Crowe provided stability in a difficult summer for Somerset, with 1,627 Championship runs at 67.

He took over the New Zealand captaincy from John Wright in 1990-91, but the retirement of Hadlee deprived him of his main weapon, and his first series was lost 3-0 in Pakistan, setting a template for his time in charge. Just two matches of 16 were won, amid suggestions Crowe was unable to inspire his players. “Martin cultivates that class thing, with all his talk about wine and fine restaurants,” grumbled off-spinner John Bracewell. “That irritates the hell out of everybody outside Auckland.” 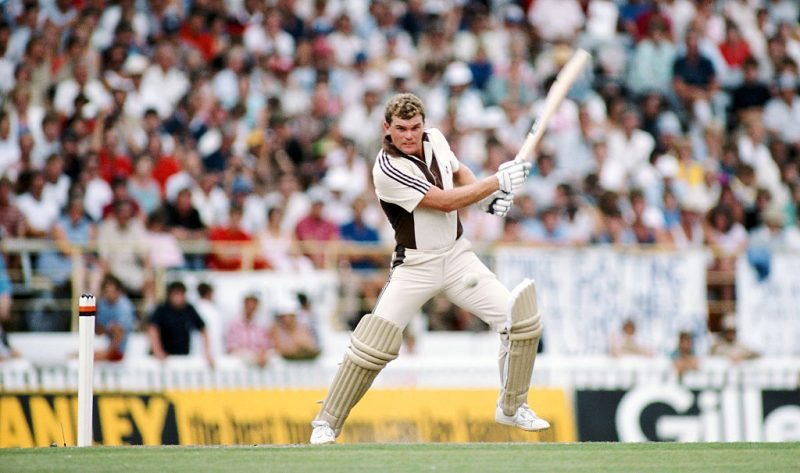 Elegant and classical, Martin Crowe was a purist’s dream

Nevertheless, Crowe averaged 54 as captain, and against Sri Lanka at Wellington in 1990-91, mounted a remarkable feat of escapology in a third-wicket stand of 467 with Andrew Jones, then a Test record for any wicket. On 299, Crowe’s concentration was scrambled by the thought of becoming the first New Zealander to make a triple-century, and he was caught behind in the game’s final over. He smashed his bat against the boundary fence and hurled it across the dressing-room. He later concluded that the “toxic suppression” caused by his near miss contributed to his cancer. “Not a week would go by when I wouldn’t be reminded of the one run I craved so much,” he wrote. “It tore at me like a vulture pecking dead flesh. I did not know how to let it go.” He was delighted when Brendon McCullum finally passed the landmark in 2014.

His captaincy ended at the WACA in 1993-94 when, while helping save the first Test, he aggravated a knee injury and missed the rest of the tour. By the time he returned, in England in 1994, Ken Rutherford was in charge, although Crowe reminded the world of his enduring class with another beautiful Lord’s century. He made a hundred in the next match, too, at Old Trafford, but after seven more Tests, the chronic knee condition forced his retirement, in 1996. In all, he played in 77, scoring 5,444 runs at 45.

He was never likely to go quietly. Grasping the need for a new shorter form of the game, he devised Cricket Max, launching it in New Zealand in 1996. Teams of 13 players batted in two innings of ten eight-ball overs each, with 12 runs for a straight hit over the boundary in a marked zone between long-on and long-off. It did not catch on, but the arrival of Twenty20 showed how far-sighted his vision had been. As a member of MCC’s world cricket committee, he badgered the ICC to commit to a Test championship, and came to believe that their failure to do so had dealt the format a mortal blow.

He became a mentor to New Zealand batsmen Martin Guptill and Ross Taylor, whose removal as Test captain in 2012 outraged him. Taylor described Crowe as a “passionate, emotional genius”, adding: “He was a pretty hard taskmaster, but he knew when to cuddle you as well.” Crowe was inducted into the ICC Hall of Fame during the 2015 World Cup group match between New Zealand and Australia at Auckland. As his health worsened, it seemed as if he might die while New Zealand were in England later that year. Taylor said: “He sent a message through before the Test at Leeds, saying, ‘If I pass away, please do not come home for the funeral’.” He lived another nine months. One of the pallbearers was his cousin Russell, the Hollywood actor, and there were eulogies from his brother, and former New Zealand team-mate Ian Smith.

A memorable accolade came from Wasim Akram, who rated him the best batsman he had bowled to. “Only Martin Crowe knew how to play reverse swing,” he said. “He was always playing on the front foot, always playing for inswing. He was very calm, and his concentration was 100% every delivery – he never gave you a chance.”