Many and varied have been the transformations of cricket grounds – our treasured theatres of creams, writes Ed Kemp.

Many cricket grounds have been used for other sports, but few have such a varied history as the Oval. Surrey’s ground hosted the first international football match in England (England beat Scotland 4-2) and two more firsts in 1872: the inaugural FA Cup final (between the Wanderers and Engineers) and the first rugby union international in England (England beat Scotland), later going on to host sports as varied as AFL, baseball and hockey. Less sportingly, it was made into a POW camp during World War II. 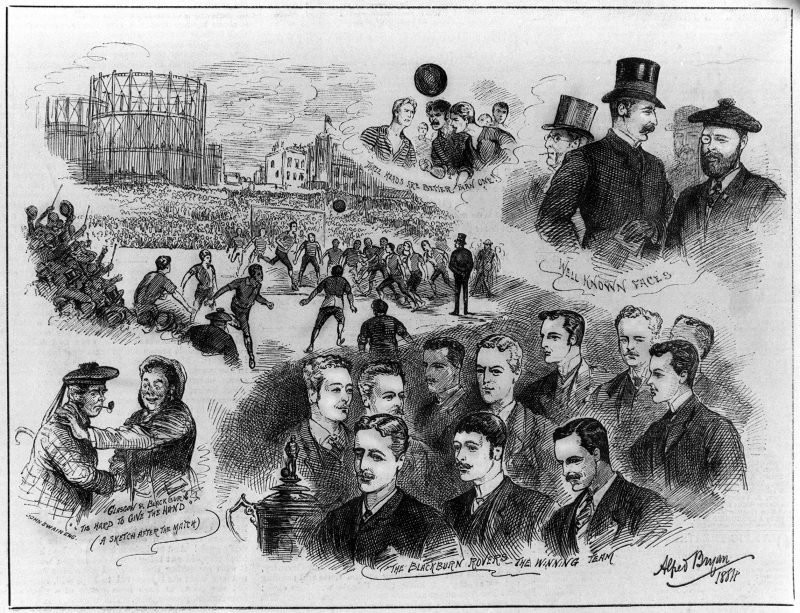 Composite illustration of the 1884 FA Cup winning team Blackburn Rovers, highlights from the final and well known faces from the crowd

What would you expect to see on the outfield at the Ageas Bowl in mid-October? If your answer is “150 life-size sculptures of zebras, all in different colours and patterns, plus 47 miniature replicas” then congratulations. You’ve obviously already heard about the ‘Zany Zebras’ project, a public art event that saw a herd of colourful zebras pop up across Southampton this summer. A link-up with the local zoo brought all the sculptures to the Ageas in the autumn for a one-off exhibition, which was enthusiastically promoted by Hampshire left-armer Chris Wood, and rather less enthusiastically by off-spinner Brad Taylor.

Setting up across the road from the world’s most iconic tennis venue isn’t an option for every amateur club, but it certainly reaps rewards for Wimbledon CC, who for two weeks each year turn their ground into a car park for Championship fortnight at the All England Club. The handsome returns help make Wimbledon one of Surrey’s most prestigious and successful clubs.

Home to MCC, ECB, ICC Europe and formerly the ICC proper, the hallowed turf of Lord’s has long been perimetered by pen-pushers. The playing area itself used to host the annual Varsity hockey match and, during the 2012 Olympics, became archery’s international headquarters, the iconic red-brick pavilion smiling benignly on a whole eight days’ worth of breathless bow-and-arrow.

6. In loo of cricket

“GYPSIES have been accused of using a lovingly-tended village cricket pitch as a GIANT TOILET” screeched an incensed Daily Express last summer, after a group of travellers set up camp in Dinas Powys – a leafy village in south Wales. “There is human excrement and used toilet paper strewn across the site,” said Nathan Piddock, the captain of the local club whose ground was invaded. After a round of meetings and legal notices, the group quickly moved on, leaving locals to return the ground to its intended – rather more sanitary – purpose.

Any ground that calls itself the Cricket Club of India is likely to have a bit of an Establishment flavour, and in that regard Mumbai’s famous Brabourne Stadium doesn’t disappoint. In fact, its clubhouse of splendid dining rooms and spiral staircases operates as an old-fashioned gentlemen’s club: stiff backs, stiff dress-code, stiff membership prices. When there’s no game the outfield creaks with wealth and wicker chairs, and if play goes beyond the scheduled finish on matchday the old boys have been known to queue at the boundary’s edge impatient for a game of bridge.

Whether it’s Tom Jones at Hove, Rod Stewart at Nevil Road or Madness at Chester-le-Street, there’s no shortage of slightly washed-up live music acts reprising their hits at English county grounds these days. While many new or redeveloped cricket venues are mining this rich seam, Old Trafford surely lays claim to the most A-list line-up, having hosted Beyoncé and Rihanna in 2016. Probably because both are close personal friends of Paul Allott.

Club cricket was one of the many casualties of World War I. Due to their flat, open nature, cricket fields made ideal army training grounds or auxiliary farmland – all of which made them decidedly inhospitable to cricket in the war’s immediate aftermath. Bromley CC’s ground, for example, became a hayfield in 1916 when their groundsman enlisted in the Royal Artillery, with one club committee member complaining of the consequent damage to his fence by a herd of grazing bullocks.

Nothing says “respected seat of learning” like the regular presence of Tim Bresnan. By situating a campus at Headingley cricket ground, Leeds Beckett University (formerly Leeds Met) offers its students frequent opportunities to rub shoulders with Yorkshire’s finest; the 2005-built Carnegie Pavilion is home not only to changing rooms, club offices, and media centre, but to lecture theatres and classrooms, too. All of which creates the delicious potential for room double-bookings, where a final-year sociology seminar ends up being chaired by a bewildered Martyn Moxon.

The biggest ever crowd to have poured into the Melbourne Cricket Ground was not for any sporting occasion, but for a preacher. During his 1959 tour of Australia, the American evangelist Billy Graham drew in a 143,000-strong audience at the ‘G. Christian historians have since claimed his compelling performances actually led to a nationwide drop in crime, extra-marital births and alcohol consumption – a trend that continued right up until the first visit of the Barmy Army.