Although he struggled with injury, Richie Benaud had a galvanising impact on the Australian team he captained in the 1961 Ashes. It earned him a Wisden Cricketer of the Year award.

If one player, more than any other, has deserved well of cricket for lifting the game out of the doldrums, that man is Richard Benaud. Captain of Australia in four successive and triumphant series to the end of 1961, he has demonstrated to enthusiasts all over the world that the intention to make cricket, particularly Test cricket, attractive and absorbing is every bit as important as skilled technique in batting, bowling and fielding. He has succeeded in his aim to recreate interest in cricket because he loves playing it.

That was, of course, why Benaud junior – to distinguish him from his cricketer father, Louis Richard Benaud – took up the sport which brought him fame as a crusading captain and high commendation as a spin bowler, batsman and close fielder.

No wonder that Richie – born Richard – at Penrith, 30-odd miles from Sydney, on October 6, 1930, showed a fondness for cricket at an early age. He had his father, a first-grade player for 20 years with the unique feat to his credit of 20 wickets in a match, as instructor and mentor.

Benaud senior, a third-generation Australian of Huguenot extraction, and a schoolteacher, bowled leg-breaks during a long career for the Cumberland club and so it was natural that he imparted the art of delivering them with the appropriate variations the googly and top-spinner to his son.

A small bat and tennis ball, then a bigger bat and hard ball, were the implements used by the eager boy in his formative years as a cricketer under his father’s expert eye. When the Benaud family after living for a while in Jugiong moved to Sydney, Richie went to Paramatta High School and here he had his first experience of captaincy. At 16, he followed in his father’s footsteps by playing for Cumberland’s first-grade team and, eventually, captained them.

The New South Wales State selectors, ever on the lookout for rising talent, first picked him when 18 as a batsman and this was still his primary role when promotion to international status came his way at the age of 21 in the fifth Test match against West Indies at Sydney in January 1951.

Thus far, his ambition had been realised, but he had no means of knowing that almost ten years later, against the same country, he would lead Australia in the First Test match tie in history. Meantime, Richie Benaud came to England in 1953 and 1956 and he also earned representative honours against South Africa, India and Pakistan. His gradually mounting bowling skill was evident on his first two English trips, but he is remembered chiefly during those ventures for the dashing 97 he hit off the England attack in the second Test at Lord’s in 1956.

The 1957/58 tour to South Africa at length established him as an all-rounder of top-class, for he took 106 wickets, which surpassed the previous record of 104 by SF Barnes, and scored 817 runs including four centuries, two of them in Test matches.

Ian Craig led Australia in this series, but the following year slow recovery from illness precluded his choice for the captaincy against England when they toured “Down Under”. So Benaud, somewhat to his surprise, but very keen to put his many theories into practice, was appointed to the task of recovering the Ashes which England had held since Hutton wrested them from Hassett in 1953.

Benaud duly completed his mission and fully justified the selectors’ faith in him despite fears that the burden of captaincy might affect his form. His fine bowling, which yielded him 31 wickets for 18.83 runs apiece, proved a major factor in Australia’s triumph of winning four Tests and drawing the other. Shrewd and inspiring captaincy transformed an ordinary side into an invincible combination bent on revenge – and gaining it. 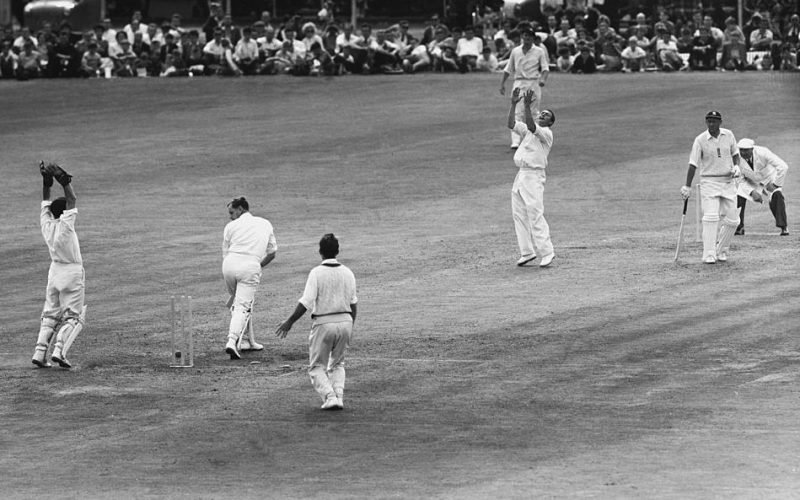 Eight Test appearances in India and Pakistan a year later and five more during the memorable visit of West Indies to Australia in 1960/61 – all as captain – brought Benaud’s total of caps to fifty. In India and Pakistan he excelled by taking 47 wickets (average 20.19) in the Tests and in the ensuing exciting rubber against Worrell’s West Indies team he was second in the wicket taking list with 23 to the evergreen Davidson’s 33.

Having with Worrell flung down the gauntlet to those who considered Test matches could only be grim affairs, Benaud consolidated his position as a cavalier captain when he visited England for the third time as a player last summer and helped his men to retain the Ashes.

His inspirational value was graphically demonstrated by the fact that although he missed nearly one-third of the matches – including the second Test – through shoulder trouble and was handicapped in some others, the Australians won the series 2-1 and maintained an unbeaten record outside the Tests.

When Benaud arrived in England with his team he pledged them to play attractive cricket – winning or losing. He also promised more overs to the hour as an antidote to defensively minded batsman or bowlers. He promised quicker field-changing and fewer time-wasting tactical conferences during play.

He and his men did their best to carry out his positive policy, and their faster scoring alone proved a telling reason for the success of the tour. When unable to lead his team, Benaud planned strategy with Neil Harvey, his able and wise vice-captain.

Pain, for which he had injections, did not deaden Benaud’s intense desire to conquer on an English visit. That his playing share was limited to 32 innings for 627 runs and 61 wickets for 23.54 apiece spoke eloquently of his influence and worth in other directions.

Nevertheless, his contribution of six wickets for 70 in the second innings of the fourth Test at Manchester when the issue of the match and series lay in the balance, was a traditional captain’s effort made at a crucial time. He explained the achievements of his side by declaring that they had risen to the occasion, but, modestly, sought no credit for his part in them.

It was a great pity that, because of his shoulder injury, Benaud could not give his admirers last summer other than rare glimpses of his best form, but he had already done enough to make sure of a high place in cricket history. He came with the reputation of being one of the finest close-fielders in the world – either at gully or in a silly position – and appreciative of the hazards thus entailed he would never ask a man to take up a dangerous post he would not himself occupy.

As a forcing batsman, Benaud, tall and lithe, has always been worth watching. His drives, powerfully hit and beautifully followed through, are strokes of especial joy to those whose day is made if they see a ball sent hurtling over the sightscreen. At Scarborough in 1953 Benaud hit eleven sixes and nine fours while making 135.

Still it is as a bowler that Benaud, in recent years, has touched the heights. An advocate of practice and yet more practice, the erstwhile youngster from the backwoods has long had a bulging quiver of arrows for attack.

The leg-break, the googly and the top-spinner have been used most often, and lately Benaud has added the flipper to his armoury. This is a ball, spun out of the finger-tips, which flashes across from off to leg – in effect an off-spinning top-spinner. For his discovery of this unusual and effective delivery, Benaud thanks Bruce Dooland who perfected it while assisting Nottinghamshire after making his name in Australian cricket.

The urge to trick the batsman has developed in Benaud the ability to evolve many more ways of getting a man out than his four basic deliveries. Changes of pace and flight, with the ball released from different heights, angles and lengths, have combined to make Benaud a perplexing rival for the best of batsmen. He really likes bowling as it affords him more chance than batting to keep in the thick of a fight he relishes.

Related Story: The current SENA combined Test XI, according to the ICC rankings

A fighter, indeed, he has been all through his cricket career which nearly came to a tragic end almost before it had begun when, as a youngster playing for New South Wales Second XI, he suffered a fractured skull in failing to connect with a hook stroke. Fortunately, he recovered to bring pleasure to cricket followers all over the world and to attain a place among the great players, a distinction earned by his taking of 219 wickets and scoring 1,744 runs in 54 Test matches to the end of 1961.

Only three other Australians – MA Noble, Keith Miller and Ray Lindwall – have scored 1,500 runs and taken 100 wickets in Tests, and Lindwall alone (228) has captured more wickets for Australia.

By profession, Benaud, who is married and has two sons, is a newspaper reporter on the Sydney Sun. He writes as well as he plays and his self-written book Ways of Cricket will act as a spur to aspiring young players to tread the road which leads to Test fame.