Back in 2012, Allan Donald, ‘White Lightning’, looked back at the fastest moments from an express career in a chat with Henry Cowen.

My way into the Free State team was after I played a match against my uncle’s school and took 9-16. Unfortunately I injured my groin and couldn’t take part which was a real setback for me because I had to wait until the next year. I missed out on the Nuffield Week and the lure of being picked for the South African Schools side, I had to wait until 1985 when I finally made it. Being part of that and being awarded the cap was an awesome stepping stone to becoming a first-class cricketer.

I was going to be twelfth man but Corrie van Zyl injured his foot. Chris Broad was our captain and literally 10 minutes before the toss he told me I was playing. I looked at the Transvaal team: Clive Rice, Kevin McKenzie, Graeme Pollock – you know, the Graeme Pollock! Jimmy Cook was my only wicket. Our keeper Robbie East said the best place to learn the game was in the opposition’s changing room so they took me through and I sat next to Rice and Neal Radford. I hardly said anything, I just listened. It was a great experience.

We arrived in India and the streets were lined from the airport to the hotel. We just sat there and thought, ‘This can’t be for us, surely!’ It was unbelievably humbling. They kept saying to us that there’s going to be 100,000 people at the game and I can tell you that when we arrived to warm up the ground was full. Taking 5-29 was an absolute dream come true. It was a freak of a day and it was probably one of the days that I enjoyed the most on a cricket ground.

We didn’t go to the World Cup thinking that we could win. Kepler [Wessels] just said that we’ve got to enjoy this experience. We didn’t think we could beat the mighty Australians so to beat them so well that evening at the SCG was amazing. I think we moved about 10 steps forward that night, even if we did go on to get annihilated by New Zealand in our next match. I remember there were so many South Africans in the SCG that night.

This was basically the start of our way back into Test cricket. To be part of that squad playing against India was unbelievably special and for the first bunch of guys back after readmission that was a historical moment. I think traditionally when you go to Port Elizabeth you know you’re in for a hard slog. It’s a really tough wicket to bowl on simply because there isn’t that much assistance for the seamers. Somehow there was bounce that we haven’t seen before and I think that was the undoing of India. 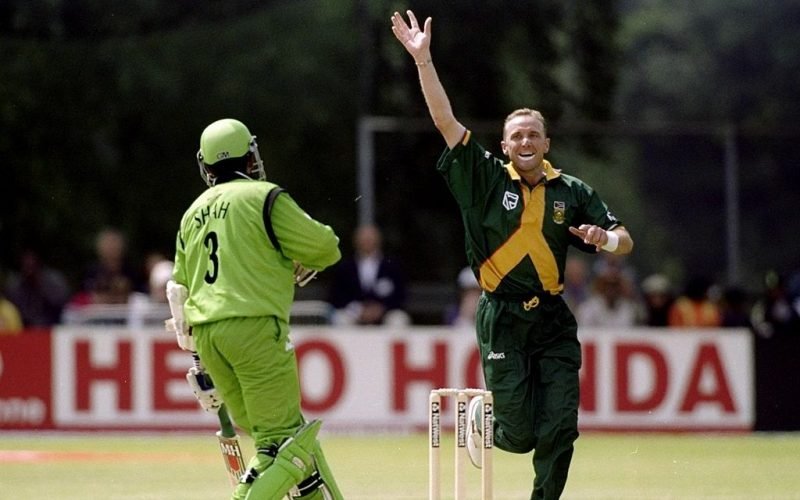 Allan Donald’s ODI bowling strike-rate of 21.78 is the joint best (alongside Saqlain Mushtaq) among bowlers with a minimum of 200 wickets

I was almost sacked three times by Warwickshire, by virtue of being an overseas player and them assessing other options. Being part of Warwickshire winning two trophies in one season in 1995 was brilliant. Most memorable to me is taking 89 wickets in 1995. That was a year in which Warwickshire said it was going to be my last because they wanted to keep Lara, so I wanted to go out on a high and perform well. As it was Brian didn’t want to come back so I ended up getting a contract for two more years.

I can very clearly remember a delivery that I bowled to Sachin Tendulkar. It was just after lunch, I bowled two nice half-volleys to start with and he put me away, as he normally would, then I bowled one that jagged back and hit the top of off-stump and I just remember that stump flying out of the ground. It means a lot to you when you knock over someone like Tendulkar. That is probably one of the best deliveries I have ever bowled.

I remember Gary Kirsten taking a hell of a catch at cover and it flashed up on the big screen: ‘Allan Donald has become South Africa’s highest wicket-taker in Test matches’ – I didn’t even know about it! I’d just gone past Hugh Tayfield, it was amazing, seriously special. Hansie [Cronje] used to get emotional about the breaking of records and there was a nice little ceremony afterwards where I was handed a cap and a shirt.

To have taken 45 wickets in eight Test matches in England is pretty special to me, I think the hardest I probably ever worked in England was in Manchester. The Test match was drawn but it felt like a loss. We had two bowlers down; Lance Klusener and Jacques Kallis were injured. Bowling 40 overs in the second innings and not coming out on the winning side was like a loss, I can promise you that. Walking into the England changing room, the one thing you noticed was how much they celebrated.

This day, 1998 – one of cricket’s most riveting duels. Who were you backing?pic.twitter.com/OFfVm0yfkY

The return to form

One memory that I will never forget is walking on to the field and thinking I was out of form. I was really not myself. It was a horrible feeling knowing that I wasn’t quite sure of where it was going. Hansie was walking down the stairs and he said ‘Listen, you’re going to get five-fer today’. Obviously I thought that was an absolute load of nonsense! I knew I was going to have to get it right but knocking over Michael Atherton with the last ball of the first over with a massive in-swinger allowed me to start to believe. Then I remember just looking up at the scoreboard and the snapshot that I still can see today is it saying 2-4. Not in my wildest dreams did I think that would happen. Subsequently we won the Test match and I walked away with 10-fer in the game. It was a magnificent performance although before the match started there had been a lot of self-doubt. My confidence just grew and grew throughout that Test match, and my belief and form then followed.