Graeme Pollock was one of the greatest left-handed batsmen of all time. After his retirement, the 1988 Wisden carried this tribute by South Africa’s leading writer and commentator.

Graeme Pollock, the great South African batsman who too soon was denied occupation of cricket’s more illustrious creases, retired from the first-class game at the end of the 1986-87 season. In January 1961, aged 16 years and 335 days, he scored his first Currie Cup century in Johannesburg, for Eastern Province against Transvaal B. Twenty-six summers later, with a score of 63 not out and now playing for Transvaal, he was there at the finish of the match which saw his team retain the Castle Currie Cup.

Heredity and environment each supposed that the Pollock brothers should go to the top in cricket. Their father, morning paper editor in the seaport where his family grew up, played for the Orange Free State. Their mother, an all-round games player of renown, came of a father who rose in cricket administration to a term of office as president of the South African Cricket Association. Frequently the family moved house, but always there was space for a practice wicket to be set down; for the brothers to bat and bowl through sun-drenched days. And should their contests become heated, always there to arbitrate was Mrs Pollock.

There is a similarity in the Pollock brothers’ cricket background and that of WG Grace and his brothers. In both, the genes had given a touch of cricket to the blood. Environment lent itself to endless opportunity for practice, and there was a mother who saw only virtue in making her sons proficient. The analogy may be taken further. Right from their early schooldays, matches were played both with and against adult cricketers of some class. 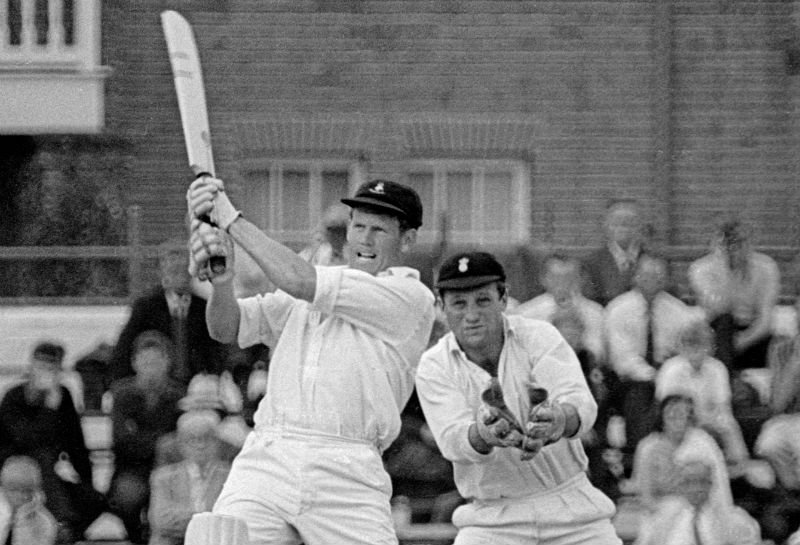 Graeme Pollock, like WG Grace, came from a cricket-oriented background

Graeme, as did Peter, went as a day-boy to the Port Elizabeth high school, Grey College. The Grey has ever had a special care for its cricketers, and Graeme soon found himself at the nets where George Cox, a kindly, able and inspiring man from Sussex, was in charge. Just nine, Graeme was picked for the school’s Under-11 team. The venue was Graaff Reinet, a farming centre 150 miles distant. Bowling, he took all ten wickets; and then he scored the first century to come from his bat. Thus, while himself not yet into double figures, as a batsman he reached his first hundred. Peter, seventeen, beat his brother to a Nuffield to South African Schools’ cap, but junior came alongside a year later, aged but fifteen.

During the school summer vacation of 1960-61, and free from studies he did not relish, Graeme Pollock set out on his first-class cricket career with Eastern Province. His maiden century was entirely in keeping with the massive scores to follow; never once did this lanky, loose-limbed schoolboy deviate from the business of scoring runs. On Wanderers, the ground that was eventually to become his cricket home, the Transvaal B bowlers were irked that this kid should calmly and methodically press ever onwards. As he neared his hundred, the bowling became more physical and the batsman more mature. Pollock, in that maiden hundred, moved through the nineties with never a hesitation; as though, as indeed was so, to the manner born. He was not yet seventeen.

He was 19 when chosen for the 1963-64 South African tour of Australia. On arrival in Western Australia, he was soon to learn that life with the Aussies is ever real. McKenzie bowled him first for one and then caught and bowled him for 0. Before the Springboks left Perth, however, Pollock showed his class, reaching a hundred in 88 minutes, with 18 fours, against a Combined XI. His Test debut came at Brisbane on December 6, 1963, but this was no happy match. Much interrupted by rain, it was the worse troubled by the abrupt end to a long-established Australian bowler’s career. The South African innings had reached but the second ball of the second over on the second day when umpire Egar at square leg no-balled Ian Meckiff four times, and he did not bowl again. That rain poured down unceasingly on the third day somehow seemed appropriate to a wretched episode in what might have been a noble occasion.

Pollock came into his own in the Third Test on the Sydney Cricket Ground. His brother, Peter, having taken five first-innings Australian wickets for 83, Graeme made 122: his maiden Test century. Thus did the Sydney Cricket Ground set the pattern for the brotherly duets that become the hallmark of South Africa’s Test matches. That match was drawn, and with the Australians one up from victory at Melbourne, the series moved on to Adelaide, where South Africa won by ten wickets.

All else in that Test gave place to the Barlow-Graeme Pollock third-wicket partnership. Coming together on the Saturday with three hours till close of play, they added 225. Adelaide, most genial of great cricket grounds, was on this Saturday packed to overflowing. No cloud in the sky, his partner well set, the younger Pollock moved through early assurance into total command. McKenzie, Hawke, Benaud could find nothing to halt or hinder his surging strokeplay.

My broadcasting companion for the series was the renowned Australian captain, and grandsire of famous Australian cricketers, Victor Richardson. Came the moment when I glanced his way, indicating it was now his turn to talk, his response was a shaking of the head and a murmured: “No, no, you carry on.” So captivated was this veteran stalwart that tiny tears of ecstasy shone in the corners of his eyes. He wanted only to sit back, the more fully to relish that day’s batting. Never will one seasoned and long experienced in cricket confrontation pay a more sincere tribute to a young man than Victor Richardson spontaneously paid to Graeme Pollock that day.

Before 1964 had run its course, MJK Smith and his MCC team had arrived in South Africa. Two good teams on slow wickets meandered through a dreary five-match series. England won at Durban, the first of the Tests, and Pollock was out twice to Titmus for five and nought. Of his eight dismissals in the five Tests, three went to Titmus and three to Allen: off-spinners both. There were times, bowling round the wicket and pushing the ball across him, when they seemed to be questioning the orthodoxy of his strict adherence to a sideways-on position. Against this, however, they, like all who bowled at him, were met by his marvellous judgement of length. Rarely was he brought forward unless the ball was there to play.

The power and the beauty of his batting came again in the last of the Tests on his home ground in Port Elizabeth. With one defeat and three drawn Tests, Port Elizabeth offered a last chance for South Africa, as in 1956-57, to square the series. Pollock made scores of 137 and 77 not out. Barlow and Bland, both in fine form throughout the rubber, could be kept in check by England’s bowlers, but not Pollock. His driving into the covers had fieldsmen occasionally wringing their hands or, more often, groping in vain for the ball travelling hell-bent to the boundary. Several off-drives were self-retrieving. There is a low retaining wall, with a smooth cement surface, just beyond the boundary at long-off for the left-hander. Pollock’s drives from it rebounded back towards the stumps at the bowler’s end.

Rain put an early end to a scene set for a fighting finish to the series, but in July that year the contest was being resumed in England. Victory at Trent Bridge in the second of the three Tests gave South Africa the rubber; and that victory was a Pollock family affair. Graeme scored 125 and 59 while Peter took five wickets in each England innings: 10 for 87 in all. 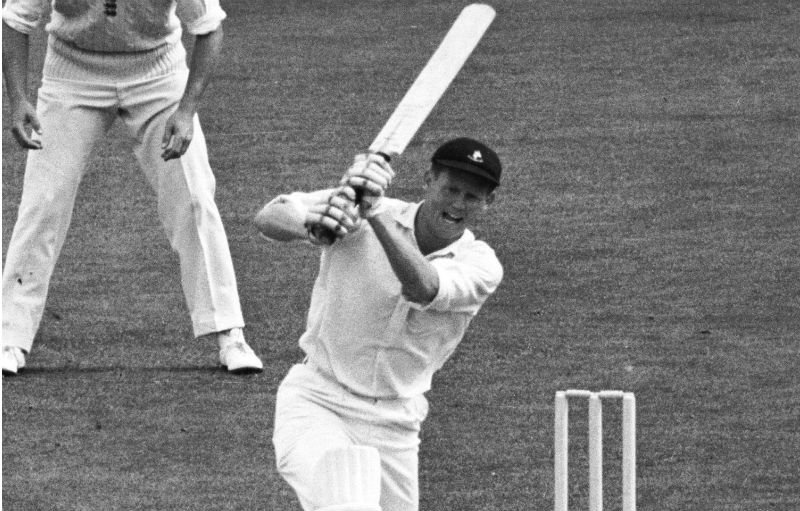 It is for his batting at Trent Bridge in 1965 that, in England, Graeme Pollock is best remembered; and this was the batting of a player only 21 years old. Of his hundred there, Wisden said: “He reigned supreme for 70 more minutes while he lashed the bowling for 91 out of 102. He offered no chance. The power and the artistry of his strokeplay that day was awesome. Using his height [6ft 2½in] to full advantage, he drove the English bowling, off back foot and front, through the covers, regardless of length. The ball to which other batsmen would have offered a defensive bat was simply struck to the boundary.” Ted Dexter later wrote of him: “He could hit the good-length ball, given only a modicum of room outside the off stump, actually harder than he could hit the half-volley. Now that takes some doing.”

Across the world cricket scene, that was pretty much the end for South Africa. Pollock was to play twice more against Australia in South Africa – Bobby Simpson’s side in 1966-67 and Bill Lawry’s in 1969-70 – and he was in England in 1970 for the series between England and the Rest of the World, which took the place of the cancelled tour by South Africa. A century in the fifth Test, which incorporated with Garry Sobers a fifth-wicket partnership of 165, was his one big innings. His scores for eight innings averaged 31.25 and were below those of the other Springbok batsmen, Barlow, Procter and Richards.

At home, however, Pollock was consistently a heavy scorer, and in the two series with Australia he was often brilliant. Against Simpson’s team came a double-century at Newlands. Four years later, when Lawry brought his team on from India, Pollock at Durban made 274 in the only South African innings and established a new record score by a South African in Test cricket.

Thereafter, his and South Africa’s international cricket were to be restricted to home series against breakaway visitors from England, Sri Lanka, the West Indies and Australia. The innings of 144 against an Australian XI with which he bowed out of international cricket in Port Elizabeth in 1986-87 was both convincing and memorable; it seemed hard to think of him as being 43 in three to four weeks’ time.

If it is permissible to attach the word genius to the artistry of a batsman, then Graeme Pollock is such among cricketers. Like others so acknowledged, he was ever the master craftsman. Perhaps the all-important factor was that from the start, the bowling he faced was more skilled and demanding than will have come the way of many others. Only Colin Cowdrey among the cricketers I have known has moved so easily up the rungs that take cricket toddlers to a Test match debut.

Pollock never underestimated the opposition, nor hesitated to meet a challenge. When 13, he became excited, even entranced, by the skill and application of the Australian, Neil Harvey, like himself a left-handed batsman. It was Harvey’s dedication to the task of making runs, and still more runs, that determined Pollock never to yield his wicket while runs were there to be taken.

His move from Eastern Province to Transvaal in 1978-79 undoubtedly enriched and extended his playing days. So, too, did the SACU move that brought the breakaway touring teams to South Africa. Graeme Pollock, a supporter of full tours to South Africa by unofficial teams of international standard, is established in cricket administration: president of the South African Cricket Players’ Association, board member and team selector with the Transvaal Cricket Council. We shall not see his like again at the crease, but he may yet become a prominent figure in cricket’s council chambers.