When South Africa visited England in 2003, a transitional summer of heroes and hostility was watched, rapt from the sofa, by ball-shining enthusiast Ed Kemp.

Mark Nicholas is leading me from the Lord’s dressing room, talking right to me, walking me from the door of the home-team haven down the steps inside the pavilion. “This is where the new England captain Michael Vaughan will lead his players in just under an hour’s time.” To the ground floor – “You can easily get lost on this walk, many have” – round the corner, and into the Long Room, past the artefacts (animate and non), through the open doors and into daylight, down the steps and now, finally, onto the perfect green turf. Nicholas says something dramatic to camera and they throw to a montage. My teenage blood begins to sparkle.

What a way to start a broadcast on the first morning of a Test. And what a time: just turned 15, an endless summer holiday ahead and a brand new England captain in office – all brought alive by the infectiously excited Channel 4 coverage.

It was 2003. Zimbabwe had come and gone away with two innings-defeats, South Africa had arrived led by a 22-year-old boy-giant we’d barely heard of, and form-wide under-performance in the end-of-year exams had delivered an unwelcome consignment of holiday Geography homework. A wonderful summer was tarnished only by the twin torments of Graeme Smith through mid-wicket and the complexities of long-shore drift – natural phenomena as maddening and unremitting as each other.

A draw in the first Test at Edgbaston was laced with defeat: 338 runs had been scored before England took a wicket on the first day – one of relentless and dispiriting toil evoking the bleakest days of the Nineties. My older brother and I – idle sofa partners for England matches throughout these years – shared custody of a cricket ball during the hours of play, taking turns in buffing one side to a perfect sheen (and even, I’ll admit, scuffing up the other). There’s little to compare to the joy of a well-shined cricket ball, and, by the close on that first day, we probably had more to show for our efforts than England did.

South Africa’s monstrously bottom-handed young skipper (“what’s-his-name”, as Nasser Hussain had regrettably referred to him pre-series) had mercilessly bludgeoned 277. Though a whole day of rain – and a wonderful hundred by run-machine Michael Vaughan – helped England avoid defeat, the game brought about the resignation as captain of my beloved Nasser. Smith, not for the last time, was heaping on the pain.

So, Lord’s. Just two days later. Vaughan had been captaining a newly invigorated one-day side who had just won the ODI tri-series against that summer’s tourists. Nasser, who’d seemed a tired old dog reverting to his well-worn tricks in Birmingham – the Freddie-round-the- wicket, the Gilo-at-the-legs, the misfield bollockings – felt like it was no longer his team. Watching him fall back into the ranks that summer was infinitely analysable to detail-hungry cricket nerds like us. Diminished in stature and under pressure for runs as never before, he reacted in the only way he knew: scrapping away with a lion heart and a potty mouth.

With existing pretensions as an opening bat and captain myself, I was naturally drawn to a) any England captain and b) battling batsmen of the ticker-and-temperament variety. I was also a couple of years into my induction in men’s league cricket and was, far from turned off by its lack of gentility, utterly enthralled by it: the blue-aired din of adult battle. People didn’t seem to think cricket was a tough game, but I knew different. They also disliked swearing, but they were wrong about that, too. As far as I was concerned swearing was big, clever and very f***ing satisfying indeed. And in that I’d had Nasser’s England to prove me right. 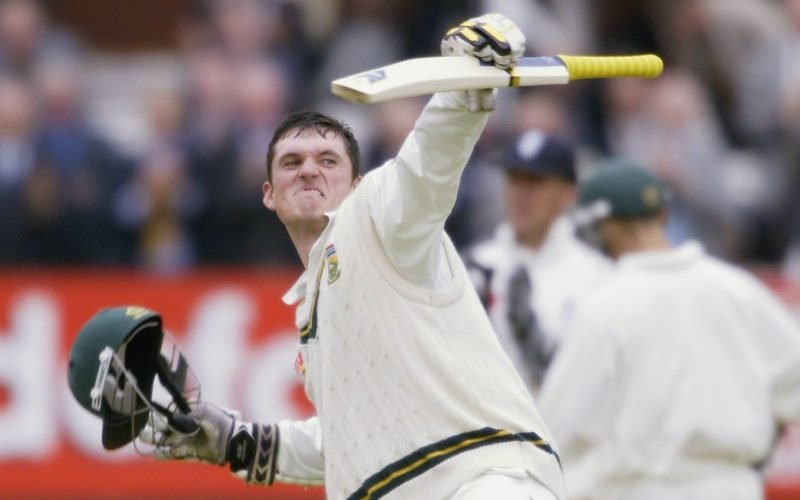 Heaping on the pain: Graeme Smith, the 22-year-old general

A few moments from that second Test at Lord’s stick out: with England having collapsed for 173 on the first morning (it was, incidentally, the beginning of a terminal decline in Vaughan’s own batting powers), Nasser was moved from his former home at mid-on/mid-off to a short cover position, where he promptly dropped Smith on 8. How on earth he must have been feeling as Upstart Biff went on to make 259 – a second double hundred in successive Tests. Later, Smith (whose side Nasser had claimed were “ripe for the taking” ahead of the Tests) was at the non-striker’s end with a 21-year-old James Anderson bowling, and began to draw the umpire’s attention to Anderson’s follow-through. Nasser jumped in with a volley telling Smith to mind his own.

I would hoover up more minutiae a year later when Ed Smith published his diary of the season, On and Off the Field. Smith had been the standout batsman in county cricket that summer and made a debut in the third Test at Trent Bridge in place of Anthony McGrath. I always so wanted debutants to do well, and he did – making fifty in Nottingham before missing out on selection for the winter tour to conclude a three-Test international career. Smith wrote how his first innings began as Nasser’s partner, and when short-leg fielder Paul Adams began chirping the new man, Nasser (who would go on to make a meaningful hundred) marched down the track to make the fight his own with a simple: “F*** off, Adams.” If Vaughan’s takeover heralded a reduction in tongue-lashings for the England team themselves, that didn’t have to mean the opposition wouldn’t still taste a bit.

Nasser’s harshest words were perhaps reserved for himself, though. In the fourth innings at Lord’s, with England attempting to bat out for a draw (his home turf), he made it to 61 before attempting a weird, wrist-flapping pull from outside off to Makhaya Ntini. As the ball lobbed up for a simple catch to Mark Boucher, Nasser let out a desperate, self-loathing roar that still hurts a little to think about. It all just meant so much.

The drama was in presentation as well as content. When former captain Hussain had joined new captain Vaughan at the crease on that first morning at Lord’s, Nicholas had buzzed on commentary that it was “a fascinating juxtaposition”. I remember it so clearly: there was Nicholas, with his innocent enthusiasm for the spectacle, and Nasser, with that unpasteurised passion for the contest. They were very different men but both had long won me over. They seemed to love cricket as much as I did. 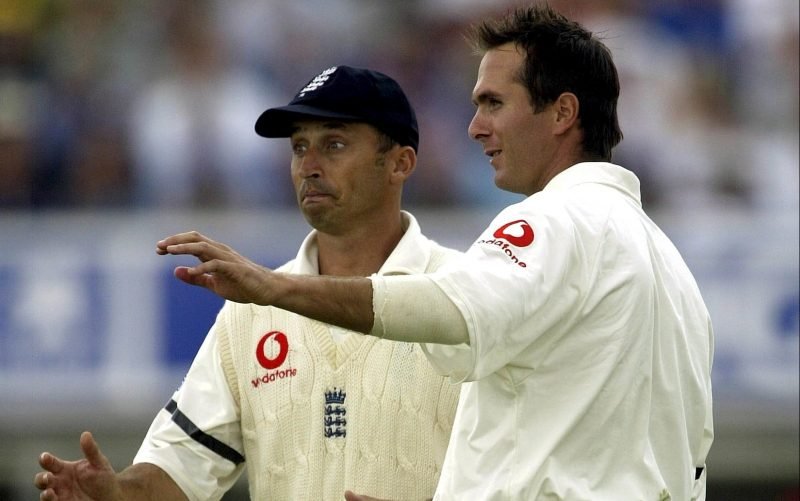 “A fascinating juxtaposition”: Hussain and Vaughan

Change was afoot, though. Our ball well burnished, my brother deserted at the end of that summer (something about going to university) and I, oxbow-laked up to the eyeballs, would be setting about my GCSEs. England, meanwhile, were quickly getting better and better at cricket.

Despite the uncertain start (England lost by an innings and 92 at Lord’s, and their injury-hit attack in the fourth Test at Headingley was spearheaded by James Kirtley, Martin Bicknell and Kabir Ali) Vaughan grew a team unshackled by the kind of intensity Nasser had so successfully and, at the time, necessarily delivered. Perhaps it even started in that failed match-saver at HQ: with the game gone, an ever-improving Andrew Flintoff had some fun in the second innings, smashing 142 and hitting Ntini (who later broke Flintoff’s Woodworm bat) for an unforgettable straight six into the pavilion. England won the third and fifth matches to secure a battling 2-2 draw, with Graham Thorpe making a memorable comeback century and Marcus Trescothick compiling a monumental 219 in the final game at the Oval. The following summer, after a career defined by struggle, Hussain got the uncomplicatedly glorious sign-off a hero deserved before standing aside for Andrew Strauss as part of a clean-sweep summer. Only one year on from that, 2005 happened.

Yes, things changed. Channel 4’s rights wouldn’t last forever and neither did Nicholas’ status as the foremost anchor-commentator. My own tastes there and elsewhere moved on, as did my attitude to on-field aggression; my view on how cricket should be played completed a gradual about-turn 10 years later. But back in 2003, when grown men were trying (unnecessarily) to talk me out, an intrepid Mark Nicholas was wafting along the front line with a camera crew in tow, and a battle-scarred Nasser Hussain was shouting at anything that moved, cricket was pure, intoxicating combat. And I absolutely loved it.