For Daniel Brigham, England’s freewheeling run through the win-soaked summer of 2004 consigned the shoe-gazing days to history and ushered in a new kind of cricket that wasn’t afraid to enjoy itself.

The summer of 2004 was a beautifully incongruous jolt. For English cricket fans brought up in the 1990s, the months of May to September always went the same way: hope, disappearing hope, no hope, despair, gallows humour, dead rubber win, misplaced hope for the winter tour.

England won only 26 Tests that decade. The most they won consecutively was three, way back in 1991. Successive accomplishments weren’t beyond them, though: they once managed seven defeats in a row.

The summer of 2004 was different. Very different. All seven Tests against New Zealand and West Indies were won. It was like discovering, after years of murdering Mustang Sally on the karaoke, you can suddenly belt out Nessun Dorma note perfectly. Old heroes shone for one final time, and new heroes arrived like a summer downpour: English cricket was refreshed and invigorated.

It was my first full summer as a cricket writer. Straight out of university and into the Lord’s press box for the first Test. Heroes typing on laptops. Heroes nattering away in corners. Heroes not saying a word in the lifts. Away from the quasi-reality of the media centre, and onto the field: Graham Thorpe, Nasser Hussain and Mark Butcher, three men who’d bridged the gap between the anguish of the Nineties and the slow build-up of hope in the early 2000s. They’d been there when England won in Pakistan and Sri Lanka and – just two months earlier – in the West Indies.

Then there were the new heroes: Marcus Trescothick, with the instantly likeable face and barbaric bat. There was Steve Harmison – on the back of his barely believable 7-12 at Kingston – Andrew Flintoff and Matthew Hoggard: a fast-bowling trio of rare and rich blend; raised, it appeared, in a butcher’s shop with gnarled, meaty frames that harked back to the days of Larwood and Voce, Trueman and Statham.

There was no Michael Vaughan, though. He’d twisted his knee in the nets while slipping attempting a sweep shot (so often England’s downfall). England’s new captain, who led like Imran Khan and batted like Ricky Ponting, was out injured. In the Nineties, this sort of luck would have sent panic through English cricket and signalled the start of a series of increasingly baffling decisions from the selectors.

This was different though. This was 2004. In came Andrew Strauss: ruddy-faced, nicknamed Barry Big Pants by his Middlesex teammates and with the voice of a man trying to get your attention by shouting through a letterbox. Lord’s was his home ground, and from the moment he got into double figures he turned the place into his manor, and a debut century seemed inevitable. Against a New Zealand attack featuring Chris Martin, Daryl Tuffey, Daniel Vettori and the retiring Chris Cairns, Strauss and Trescothick forged an instantly successful opening partnership and put on 190, the start of a beautiful relationship. There was another sign of the future in that first innings, too: a fire-fighting seventh-wicket partnership of 115 between Geraint Jones and the rapidly maturing Flintoff in just 19 overs. It was gloriously fearless cricket: this was England, but not as we knew it.

The first Test was as much about endings as it was about beginnings. Hussain provided the most electric moment of the five days; perhaps the summer. Set 282 to win, Hussain ran out Strauss 17 shy of what would have been a remarkable second century on debut. I was in the toilet at the time; the collective intake of Lord’s breath told me the bad news. I didn’t make the mistake twice: this was a time to be a fan, so the Lord’s press box was left behind and a rare spare seat was found in the Grand Stand as Hussain, in partnership with his old mate Thorpe, raced England towards a hugely impressive win. 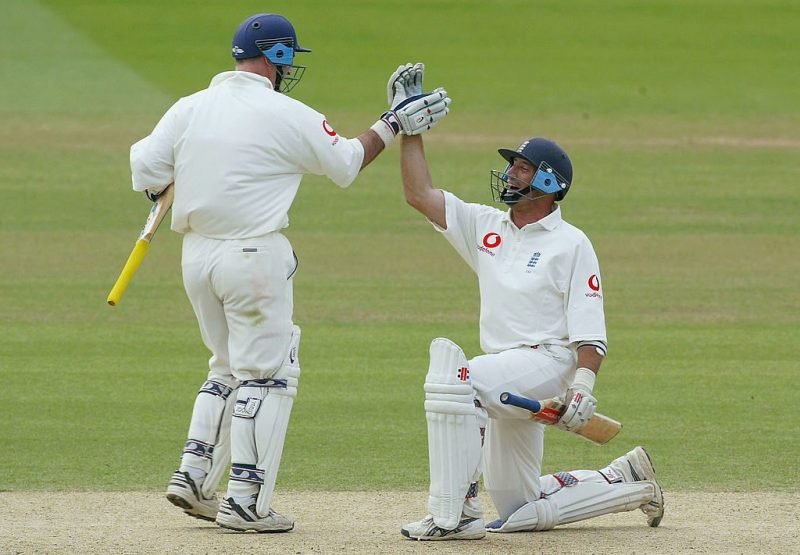 Hussain’s final three shots were instantly spray-canned onto my memory: the first, a lofted drive off Martin, took him to 96, the second was a punchy cover-drive that brought up his century, and the third another cover-drive, this time with extended arms, which completed a thrilling win. Hussain ran off with his bat held aloft, never to return as a Test player. The standing ovation befitted a man who had done so much to turn English cricket around, and his retirement was one final selfless act: it allowed Strauss to remain in the team when Vaughan returned.

The win was a thunderous omen of what was to come across the summer. England had shaken off the self-pitying lethargy of the 1990s; they’d gone from jesters to entertainers. Three times that summer they were asked to chase down over 230 for victory; all three times they managed it with at least four wickets in hand. England had eight centurions across the two series, with perhaps the finest coming from Thorpe at Trent Bridge in the third Test against New Zealand. It was peak Thorpe: always compact, always secure, but playing with élan; England’s pursuit of 284 for victory never looked in doubt while Thorpe was busy driving and nurdling. We’d miss him when he was gone, we said.

When England weren’t asked to chase down targets, they twice hammered West Indies by over 200 runs. Victories were set up by that trio of Harmison, Flintoff and Hoggard. Brian Lara, just 12 weeks after his unmagical but momentous 400 in Antigua, failed to reach three figures in eight innings. Harmison’s radar was often awry but, unlike Devon Malcolm in the 1990s, he was trusted by the selectors and the captain; Vaughan knew a match-winner when he saw one. Harmison rewarded him with 38 wickets in the seven Tests, including whirling, brutal spells at Old Trafford and The Oval in the final two matches of the summer. As unsure West Indies batsmen got caught between hooking, ducking and legging it, Harmison not only crushed the opposition but softened the memories of Hall, Garner, Holding, Marshall, Ambrose and Walsh destroying English batsmen across five scarred decades. The summer of 2004 had become deeply cathartic. 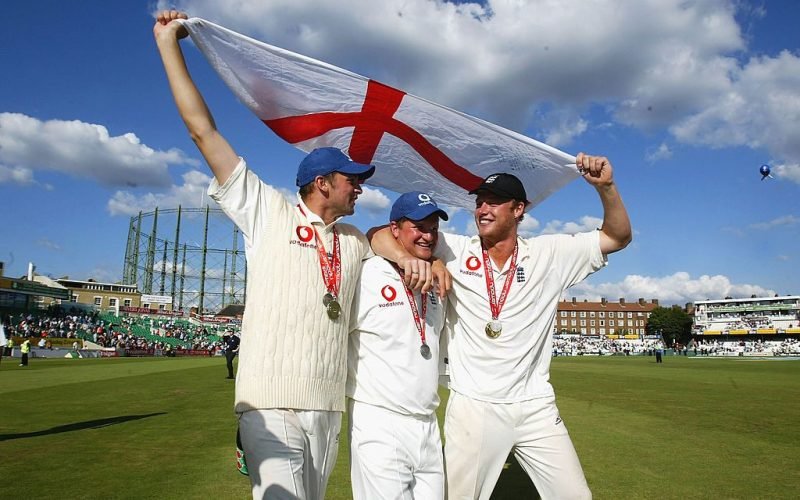 Like all of the best sides, there were forgotten heroes in England’s ranks. I watched Rob Key’s double-hundred against West Indies at Lord’s in an empty Penzance pub (you know the cricket’s going well when you’re not using a holiday to avoid it but actively seeking it out). Then there was Ashley Giles. If England’s team was full of players who looked like they’d quite happily go for a drink or six with the fans, Giles was the sort who’d make sure everyone got home safely. Constantly derided throughout his international career, he was England’s leading wicket-taker in the West Indies series.

August 21, 2004: the day England completed their seventh successive Test win, equalling their record set in 1888 and 1929 (on the back of Strauss’s 220 runs, they would break the record with a win at Port Elizabeth in their next Test). The day of victory at The Oval was fitting: the UK was celebrating a gold rush at the Athens Olympics. Cricket, for so long the embarrassing friend in English sport, was finally invited to the party again.

Do people remember the summer of 2004 as fondly as it deserves? It seems to have been consumed by the enormous orbit of the 2005 Ashes. Perhaps England’s agonising loss to West Indies in the final of the Champions Trophy in September soured some memories. But it really happened: England won all seven Tests, and they did it with an attacking, hair-raising and joyful pizzazz – yes, pizzazz! – that we could only dream of during those shoe-gazing days of the 1990s. English cricket was golden again.