For Alex Bowden the Millenium year saw a transference of love from runsmiths to workhorses. It must have been the windowless call centre.

Before the summer of 2000, my favourite England cricketers were Gooch, Atherton and Hick. Since then, they have been Gough, Caddick, Harmison and Anderson. A switch in allegiance from batsmen to bowlers. That straightforward. That clear cut.

It’s a truism that it’s bowlers who win Test matches, but despite this I think a lot of us grow up with our focus on batting. When you play as a kid, one-on-one against your dad or a friend, it’s runs that matter. Most runs wins, because in those situations it’s always 1-1 when it comes to wickets.

I was hardly new to cricket in 2000. There are photos of me holding a bat at the start of the Eighties at an age when I can barely stand, yet I think it was only really as a result of that summer’s series against the West Indies that I came to truly relish the excitement brought by a wicket.

If you don’t bowl out the opposition, barring moronic declarations from the opposition, you cannot win. Runs may steer a game, but a clutch of wickets can redirect it so much more sharply. In 2000, it was hard to avoid having your breath taken away by the U-turns.

Perhaps it was Ed Giddins who started things off. His 5-15 against Zimbabwe in the first Test of the summer seemed to recalibrate the attack such that Gough, Caddick, Cork and White felt obliged to take ever-cheaper wickets to retain their places in the side. Catches were taken, appeals upheld, and later in the summer Caddick appeared to be hitting the stumps as often as not. Even Curtly Ambrose and Courtney Walsh couldn’t keep up.

I’d left university and found myself working on a helpdesk – the kind of understaffed, ill-informed helpdesk that gives helpdesks a bad name. Call queues were long. Call duration targets were short. Help was in short supply.

The company routinely asked us to make promises it couldn’t keep and the general level of expertise can be summed up by the fact that one caller, a customer, had to inform a member of the helpdesk staff that the machines we supplied had an ‘on’ button. The staff member wasn’t alone in his ignorance. None of us had known.

As you might imagine, most of the people I spoke to were angry and I quickly developed a Pavlovian response to the bleep in my ear, which was to become ever-so-slightly more unhappy. Trapped in a windowless office on a featureless industrial estate, wondering whether this was all the world of work had in store for me, it was more than a relief when summer came around. The sun came out, friends returned to town and the Windies arrived. 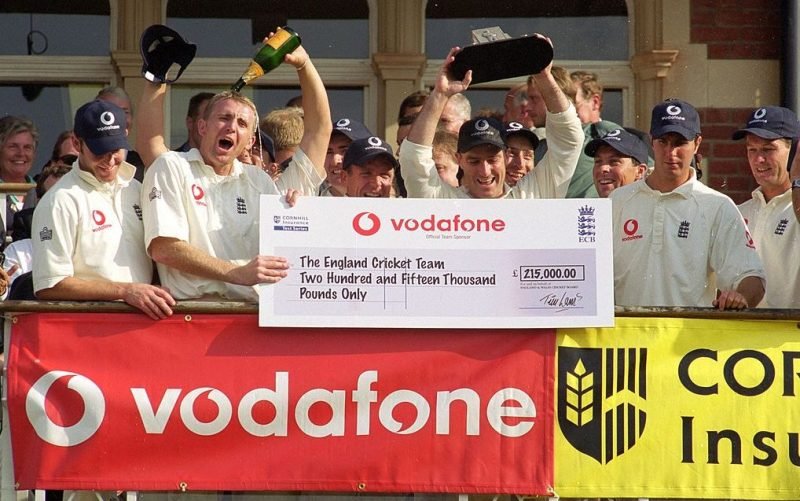 It is very, very important to have friends who enjoy cricket. My high school friends didn’t and they exerted a gravitational pull on me, drawing me into a temporary, elliptical orbit that took me further away from the sport. Fortunately, by the summer of 2000, that horrifying situation had been resolved.

That year, I didn’t just follow the cricket – I was in an environment where I could relish it. I and the people who are my best friends to this day all watched it on the TV; and when we weren’t near a TV, we listened to it on the radio; and when we weren’t near a radio, we talked about it. England v West Indies became what all Test series should be – an unignorable Sly Stone bassline; always present underneath it all, giving life a unique sound for a couple of months.

This particular groove’s gloriousness lay in its unpredictability. England lost the first Test by an innings, but this apparently meant nothing, because having conceded a 133-run first-innings deficit in the second Test, they promptly bowled the Windies out for 54. England had fielded an astonishingly varied attack of five right-arm seam bowlers and against a batting line-up boasting Lara, Chanderpaul and Jimmy Adams, just three of them had been required.

To understand what this meant to fans who the previous summer had endured a Test series defeat to New Zealand and a famously ignominious exit to a World Cup held on home soil, you need only look at some of the top run-scorers in the County Championship that season. 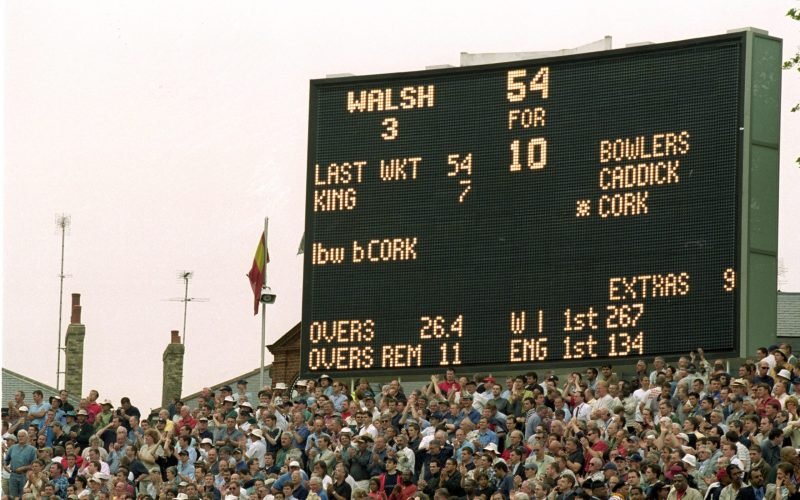 The scorecard showing West Indies’ total against England at Lord’s

Justin Langer, Matthew Hayden, Matthew Elliott, Stuart Law, Darren Lehmann and Michael Bevan all made over a thousand first-class runs. So too did Simon Katich, but with a pathetic average of just 43.56 he wouldn’t have made the Aussies-in-county-cricket top six.

Most of these players weren’t Test regulars at that time. They were the second string. The Aussie batting line-up was populated by supermen. While England would ultimately be butchered 4-1 in 2001, the clatter of wickets in 2000 at least provided a sense that our boys had acquired some Kryptonite.

I presume I went to the third Test because it was at Old Trafford and I’ve always gone, but I remember nothing of it. Perhaps we all got drunk. Or perhaps, despite a Lara hundred, it wasn’t the best match. It ended in a draw after all. I’ll say it again: Tests need wickets.

For a short while, as swing, seam, bounce and accuracy combined, Caddick seemed like the finest bowler who ever lived

In that regard, the fourth Test at Leeds delivered, and just as being at the ground was no guarantee that I’d be moved by what I saw, so being elsewhere was no guarantee that I wouldn’t, for I experienced the most exciting passage of play while scrambling about the rocks of Anglesey’s coast while pretending to fish.

I am not a fisherman by any stretch. But what I do like is lounging about in the sun, listening to the cricket on the radio with a cool box containing far too much food within easy reach. When you learn that ‘fishing’ can be like a day at the Test, but at the seaside, you graciously accept a rod and practise your futile, unproductive casting.

Not that I got much practice in. My abiding memory is of repeatedly darting towards the radio to hear what had just happened as Andy Caddick fashioned some parallel world where wickets were as likely as runs – four in an over as the West Indies were dismissed for 61 with the promise of glorious slow motion footage of stumps being spread on that night’s highlights.

It was life-affirming collective euphoria. It was five days’ worth of wickets – all the meaningful action, all the excitement, all the fun – constricted into just two days.

By the time Dominic Cork and Craig White reduced the tourists to 39-5 in the fifth Test, carnage had become standard operating procedure. And if even Lara could be dismissed for a golden duck, there was always a chance, forever after, that things could change for the better in an instant.