Alex Bowden recounts the tale of Andrew Caddick running through the West Indies lower order in a single over to complete England’s resoundinging win at Headingley – one that helped them register a first series win over West Indies after more than three decades.

These days, ‘transitional period’ is just a phrase they use when the team starts losing. However, back in the summer of 2000, England truly were in a state of transition. In 1999, they lost at home to New Zealand, but then 2000/01 brought one of their most admirable winters, with series victories over Pakistan and Sri Lanka.

In between those two extremes was a home series against the West Indies. A facile early summer victory over Zimbabwe had preceded it, but that hadn’t proved much to anyone. England were still a mediocre side – a fighting side, perhaps, but still one worryingly prone to low scores.

If the side you support doesn’t steamroller all before it, then the first thing you need is hope. Hope can keep you interested through all sorts of dire match situations. The first Test was lost by an innings, but the second Test at Lord’s brought together an attack which, with the benefit of hindsight, really should have played together rather more than it did. Andy Caddick, Darren Gough and Dominic Cork led the way, with support from Craig White. These players brought that particular brand of hope which comes in the form: ‘Just a couple of quick wickets and we’ll be right back in this.’

It was like some kind of alchemy had been performed. At Lord’s, the Windies were bowled out for 54 as England levelled the series; then, at Old Trafford, they were dismissed for 157 in what turned out to be a draw thanks to a second-innings Lara hundred.

But it was the fourth Test at Headingley which brought perhaps the defining moment of the summer. 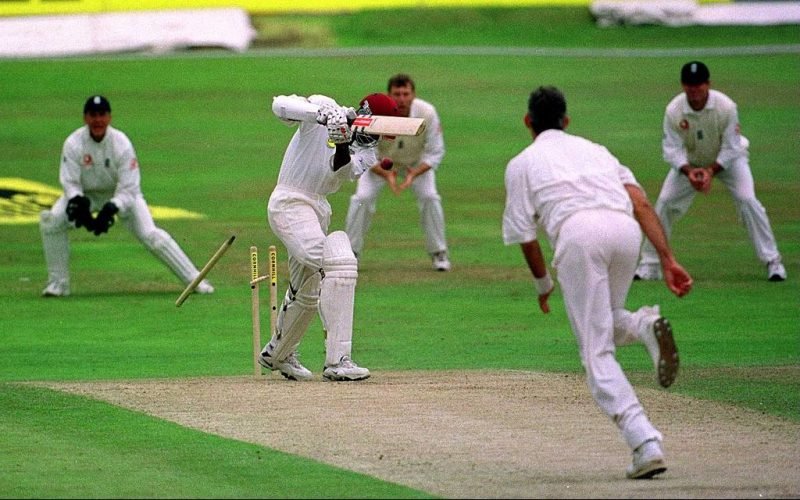 In the third over of the Windies’ second innings, Gough had taken two wickets, but Caddick went one better than that a short while later. No, scratch that – he went two better, with four wickets in one totally unhinged seven-ball over.

It almost does the moment a disservice to dwell on the details, because the joy lay in the delirious chaos and the sense of limitless possibility. Memories of toiling England seamers faded against a new backdrop of wanton destruction. Yes, it was the lower order, but a boisterous crowd and those of us watching at home really didn’t care.

Ridley Jacobs was lbw off the first delivery and after that, it was Timberfest 2000. Nixon McLean lasted two balls, Curtly Ambrose just one. Reon King did best. Failing to edge the hat-trick ball – a no-ball – he also survived a second delivery before being yorked by an outswinging beauty to bookend the over.

A few minutes later, Caddick swung yet another into the stumps to secure an innings victory. It had been the second day of the Test and a fragile England side had learned how to fight back.