Former Middlesex and England twirler John Emburey revisited the highs and lows of his 27-year-long career during a conversation with Ross Lawson.

Brearley in the bushes

I certainly didn’t let anyone down or feel overawed despite it being my debut. Fred Titmus played in that game. He was such a great player, and it was fantastic to play alongside him. I loved watching him bowl – seeing how easily he’d gain control was a great learning curve for me. But the most memorable moment was Margaret Wilson, one of our members, pushing Mike Brearley into some bushes because she was aggrieved John Murray was left out. Welcome to county cricket!

I’d only recently become a regular for Middlesex but players were away at the World Series and that gave me the chance to make my debut. People like Geoffrey Boycott and Bob Taylor were new to me, but there were three other Middlesex players and I knew Graham Gooch from schoolboy cricket. I’d heard a lot about Boycott and didn’t know what he was going to be like, but he was brilliant, so encouraging. I was fortunate to get a wicket with my fourth ball and that took pressure off and allowed me to find some rhythm.

A dozen for the day

I went out with a couple of the players the night before but woke up feeling fresh, and when I came on to bowl I just felt fantastic. We got wickets, made them follow on and I ended up with 12 in the day. I hadn’t realised I’d taken that many until later in the season when someone said I was getting an award. The odd ball turned, but it was one of those days when everything just worked. There’s nothing better than getting five-fors, and two in a day was incredibly pleasing.

I remember being put on my backside by Sir Andy Roberts when I was batting! I bowled well and dismissed lots of top-order batsmen from around the wicket, which was very pleasing against the likes of Richards and Lloyd. The sun was so bad I wore transition glasses, which never really happened in cricket, but it seemed to work with me getting my first Test five-for! Never did like wearing them, though.

My only Man of the Match award for England. There were many other times where I could have got it, but it was usually snatched out of my hands by heroic Botham moments – like Edgbaston 1981 when he took 5-1. I put in better performances elsewhere but to be recognised was fantastic. It was hot and noisy and a few players had never been to Sri Lanka before – playing that Test was a huge thrill. We didn’t score huge runs but they were nervous, and I got a chance to bowl in partnership with Derek Underwood properly for the first time. Outperforming him in the second innings was fantastic for me.

In hindsight, should we have gone? Probably not, and we probably went for the wrong reasons

Going the first time just seemed the thing to do. We played the first day of the tour, then got telegrams saying that there may be bans if we took to the field, which of course was too late. We weren’t aware of this when we went. I fractured my hand in the second game and that was my tour over. I didn’t play for three years because of my ban. By the time the second tour came around I was a more experienced player and while I knew a second ban would be imposed, I was 38 and didn’t think there would be too many more opportunities for me in Test cricket. In hindsight, should we have gone? Probably not, and we probably went for the wrong reasons. I would likely have got to 100 Tests if I hadn’t missed those six years.

It still affects me now – 29 years on and I’m still gutted about it. We should have won the World Cup and we didn’t, and that rankles with me. I didn’t bowl as well as I had earlier in the tournament, but I don’t think I bowled badly in my first spell. Mike Veletta got a quick fifty which turned the game. When you don’t contribute in a big final you feel as though you’re one of the players that has contributed to defeat.

I should’ve had eight! Dean Jones was lbw, hitting middle stump, but the umpire thought otherwise. Absolutely one for DRS! Sydney was a great place to bowl, with the bounce. When you’re on a ‘giving’ pitch, it’s about bowling maidens and waiting for something to happen. I made some runs too, with a runner, then when I started bowling Allan Border went apeshit. I’d batted two-thirds of the day for 69 without being able to run, then started bowling which he found unfair but it was only when I ran and turned that I felt the groin problem. The general consensus was to tell him to f*** off. 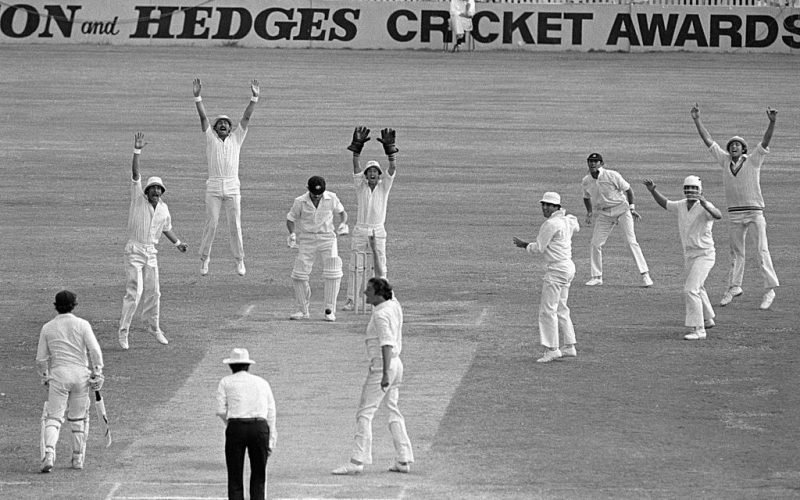 Jim Higgs is trapped leg-before by John Emburey in Australia’s second innings at the SCG, 1987

It would have been nice to captain before at county level but to lead England at Lord’s was fantastic. We had them five down at lunch and were in a good position. [Graham] Dilley bowled brilliantly and I remember having an 8-1 off-side field. I’d never played in a game where I’d seen that, and there I was captaining England and I’ve got this field and I’m thinking, ‘F****** hell, what is this!’ It became a bit loose after that and the damage was done – they crept to 204 and we ended up losing. Then we went to Old Trafford, where on the last day there was rain scheduled for the afternoon and we lost our last wicket on the stroke of lunch. I was dropped after that to get some form, which I understood, but I wondered why I was picked in the first place. It was very much a mockery that we had four different captains that summer.

The one that got away

This was probably the most disappointing match of my career – certainly more disappointing than any Tests I played in. I bowled the penultimate over and the last ball went through the keeper’s legs for four, bringing the chase down to 13 off the last. It was a game we should have won, but it was taken away from us. Middlesex didn’t lose too many games in that period and to lose that one when we were in such a healthy position was a huge blow.