Speaking to John Stern in 2014, a pair of Londoners – Graham Gooch, a prolific opening batsman from the east and John Emburey, a canny off-spinner from the south – recalled their enduring friendship.

Since being thrown together in a London Schools side, Embers and Goochie have been inseparable. They were on the same side in 86 England internationals and in opposition for Middlesex and Essex countless times. Here’s the tale of their never-ending partnership.

How and when did you first meet?

JE: It was 1969, down at Barn Elms in south-west London. London Schools…

GG: …culminating in a tour to Zambia and Kenya. It was the first time I’d ever been on an aircraft.

JE: It was the first time I’d ever been overseas! I suppose what cemented the friendship to start with was that we were all billeted out. Graham and I were put together with a family called Ellis in Zambia. We were only 16, going on 17, and although it was primarily a cricket tour there were opportunities to visit game parks and to have other new experiences along the way. We went up to the copper mines.

GG: I remember a family taking us out into the bush looking for hippos and rhinos. They told us that if you see a hippo on the road you accelerate, you don’t slow down, because otherwise you’ll come off worse if you have a collision. I’m not sure that’s a great animal rights story!

JE: We spent a lot of time together. In Kenya we stayed with a German woman and her English husband – that was a bloody nightmare. Graham and I were very similar, especially in the food that we ate which was the very plain food that we grew up with. One night the couple were having people round for a whist evening so we had to have our meal in our room. We found out the next day that the other boys had been out gallivanting around and we’d been stuck in our room, eating this food that we didn’t enjoy, which we’d left quite a lot of. The next day we got a dressing down for leaving all this food. We weren’t too happy about it…

GG: … I’d never had sauerkraut before.

And you’ve been best mates ever since?

GG: We hit it off straight away, we liked the same things and got on well. It was just fate that we were thrown together. Our friendship’s remained unbelievably strong all the way through our careers and now, even on the periphery of the game, it’s still exactly the same.

JE: We were set in our ways from a young age. I remember Graham doing all these bloody press-ups, about 72 of them – and I could do about seven! So straight away it was clear he was into keeping fit and I wasn’t. I played football in the winter but I didn’t like doing any exercise unless it was actually sport, whereas Graham…

GG: You played a lot of squash though. We used to play squash at Lord’s even during Test matches if we were both out or it was raining. And of course, our England careers pretty much coincided with each other.

Did friendship blossom on England tours?

GG: Our relationship in the England team was really cemented on the ‘78/79 tour of Australia. John played in four out of the six Tests alongside Geoff Miller when we switched to playing two off -spinners. 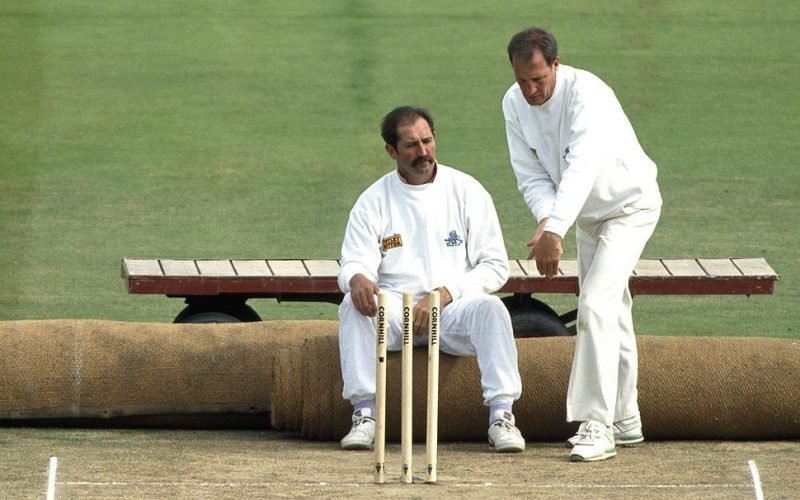 Did you ever coach each other?

GG: We used to throw to each other. I was talking to Andy Flower last night and that has gone out of the game.

JE: These days players expect somebody [back-room staff ] to throw to them and they queue up waiting for it.

You both played in the 1981 Ashes – what are your abiding memories of that series?

GG: Well, the biggest thing that happened in that series was that Ian Botham was about to be sacked as captain but resigned before he was sacked. They brought Brearley back as a sort of stop-gap and that made all the difference. Not so much that Mike was a brilliant captain but he had the knack of bringing the best out of people like Bob Willis and Botham in particular who was the most influential cricketer I ever played with for England.

JE: It was as though the chains were off though wasn’t it? There was less pressure on him when he wasn’t captain and he just went out there and played. 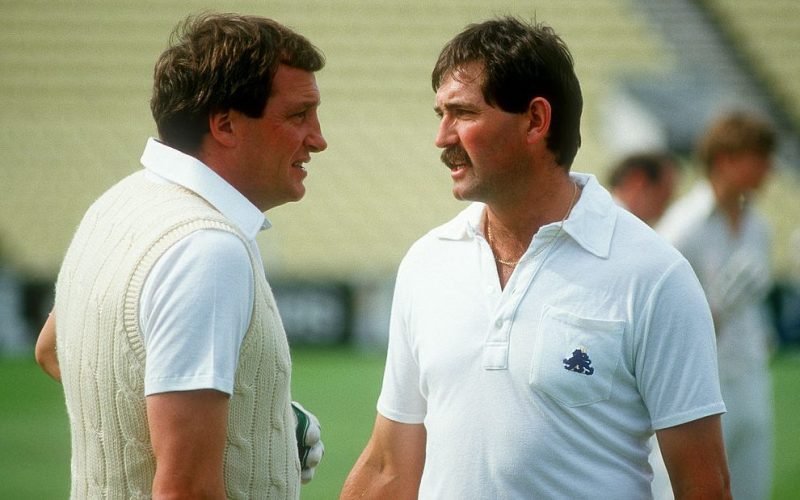 Emburey and Gooch played together in 48 Tests and 38 ODIs

JE: And the next game at Edgbaston was very similar. Australia needed 140-odd and it followed a similar pattern.

GG: John got the big wicket, Border. Gloved it.

JE: Well it hit something!

JE: I was on. Brearley wanted Ian to bowl but Ian said he didn’t think he should. He was going to bring Chris Old on and then we got Border. Brears and Both stood next to each other at slip, they were chatting about it and Both said, “OK I’ll bowl.” Then my next over Both caught Yallop at silly mid-off and after that…

GG: …yeah he rushed in and bowled quick. Got five for one. Martin Kent [Australia batsman] made that great comment didn’t he? “Stuff this chasing 120. Give us 350 to chase and we’ll be OK!”

At the end of the following winter you both went on the first rebel tour to South Africa. Was that something which you, as good friends, discussed?

JE: It was very much a last-minute decision. It was really decided when we were in Sri Lanka. It was only a couple of weeks before it happened.

GG: Yeah, there were a lot of negotiations going on throughout the Indian tour about this private tour being put together. You’ve got to remember a lot of players were playing cricket in South Africa at the time individually. We were only contracted for the tour, county contracts started 1st April and there wasn’t the money in the game that there is now. We were professional cricketers so as John said it was only sorted out right at the end. I think coming on the back of a turgid series in India didn’t help.

You were both part of hugely successful county teams, Essex and Middlesex – what was it like playing against each other?

GG: You’d spend more time in our dressing room than your own.

JE: Yes and it got to the point where one day the Essex boys moved my case out of the Middlesex dressing room and into their own.

GG: Fletch [Keith Fletcher] and Clem Driver, our scorer, used to play bridge, and Gatt and Ernie [Emburey] used to come into our dressing room to play bridge with them two. 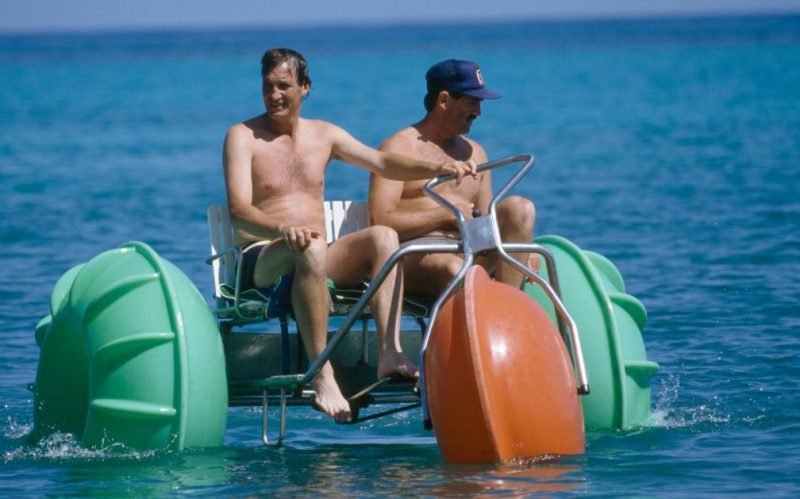 Emburey and Gooch relax on a water trike at Ocho Rios, Jamaica, during the 1986 West Indies tour

How competitive was it when you faced each other?

GG: It was a friendly rivalry but it was a rivalry. I didn’t want John to get the better of me but there was no needle in it.

JE: We had two winters playing together for Western Province in South Africa so I spent a lot of time bowling in the nets to Graham. But when we came back I couldn’t bowl to him. He spanked me all over the place.

GG: Embers used to like getting through his overs. He would be back to his mark and ready to bowl straight away so I developed this routine where I would be in my stance with one hand on the bat and one held up towards the bowler, going “Hang on Ern, not ready yet, not ready yet … Right OK, ready.”

JE: That used to piss me off. It’s like playing golf. I used to play the shot out of turn because I was too impatient for the guy behind me to hit the ball. I wanted to get into a rhythm by bowling and a lot of sides knew that so used to slow me down. It really annoyed me.

GG: The last time we played against each other, which was also my last game, was just a few years ago.

JE: I still play for Lashings and Graham actually played a game against us at the HAC ground in the City. He swept a ball off me, got a top edge and cut his eye – he didn’t have a helmet on.

GG: My pride was dented…

JE: …he was more annoyed because, when he came off, he had this gash above his eye and his partner didn’t notice it.

On England’s disastrous tour of West Indies in 1985/86 Graham Gooch was close to flying home early, worn down by the ongoing protests in the Caribbean about his connections with South Africa. In her entertaining but controversial diary of the tour, Another Bloody Tour, Frances Edmonds, wife of England and Middlesex spinner Phil, articulated the closeness of Gooch and Emburey: “One of the people no doubt pleased to hear of Gooch’s final change of heart was his inseparable ‘Siamese Twin’, John Emburey.

‘Good job Goochy isn’t going home,’ was the general feeling in the camp. ‘Otherwise they’d have to put Embers on a life-support system.’”

Frances played an unexpectedly central role in Emburey’s wedding day in 1980. Emburey chose Phil Edmonds, rather than Gooch, as his best man because he had a “closer day-to-day relationship” with his Middlesex team-mate than with Gooch at that stage of their careers.

Emburey recalls: “But his speech was just a load of gibberish so Frances said ‘Oh, for f***’s sake, Philippe, just sit down. Then she got up and gave the best man’s speech.”

“That about sums it up,” says Gooch. “She’s a fearsome woman. Phil and her used to have some fearsome rows. We were in the Melbourne Hilton one time, all sitting round by the hotel pool and suddenly all these clothes started raining down on the pool. She’d tipped his suitcase out of the window.”

Your respective counties were the dominant forces in the domestic game for much of the 1980s. What was behind that?

GG: We were very fortunate to learn our cricket under two very attacking, astute tactical captains. Mike Brearley [Middlesex] was a great leader of men; Keith Fletcher [Essex] wasn’t so gifted in that respect but he was a brilliant tactical captain.

JE: They both encouraged opposing captains to have games of cricket. Essex would win games out of nowhere and you’d think, “Well, how did you get a game of cricket out of that?” And we would as well. But it was because they were experienced, respected figures on the circuit.

GG: You had to be enterprising. If you wanted to win the County Championship you had to win about about half of your 20-odd games. So you had to make games, set up totals to chase, which put the bowlers under pressure. There were a lot of good things about three-day cricket. Captains had to be enterprising, aggressive and be prepared to lose to win. I think that’s almost gone out of the game now. Captains now are much more reactive and not so proactive.