In 2017 Stephen Fay, former editor of Wisden Cricket Monthly, recalled witnessing Australia’s ‘Invincibles’ take on England in 1948, a series which included one of the game’s most famous dismissals.

1948 was perhaps the greatest year in the history of cricket. Australian cricket that is; and their team peaked on a foreign field, or five fields to be precise – the Test match grounds of post-war England. Australia’s captain Don Bradman was the greatest batsman since WG Grace and for a generation of boys born just before World War II, who were growing up after it, his team displayed such superiority that a generation became conditioned to living with defeat. They seemed Invincible.

It was not just Bradman. Ray Lindwall and Keith Miller were one of the greatest fast-bowling partnerships in the game’s history. Miller, who was also a powerful batsman, was an early case of sporting celebrity, who gave schoolboys a glimmer of what glamour might be like. And when one of them was resting, Bill Johnston’s left-arm fast-medium spread havoc. Arthur Morris opened the batting with Syd Barnes, a man of strong opinions to whom rules were a challenge. Lindsay Hassett was shorter and nicer than Bradman; an 18-year-old prodigy named Neil Harvey was given his chance. I can feel the awe, just writing those names down, 69 years later.

The only way to watch cricket in 1948 was to go to the match. There was no TV and ball-by-ball radio commentary was futurology. What we got were intermittent reports from Rex Alston on the BBC, and the late scores which appeared in the Stop Press columns on the back pages of the three London evening papers. Grounds were full, but anyone who turned up early enough simply paid cash at the gate. And sat on the grass. 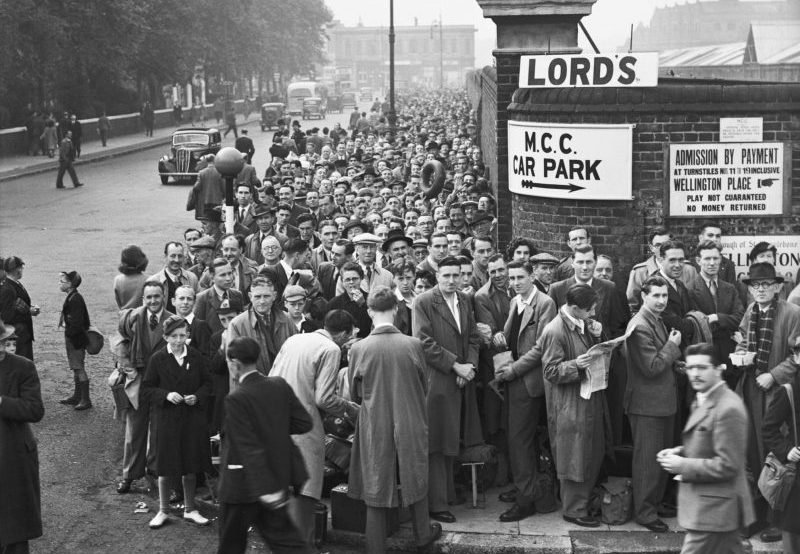 A record attendance of 132,000 turned up at Lord’s over the course of five days to watch England take on Bradman’s Invincibles

I was only nine years old, but the second Test in 1948 was at Lord’s, and I longed to be there. My father was a journalist in the London office of the Manchester Guardian, and he got on well with Denys Rowbotham, the cricket correspondent. Rowbotham met me at the Grace Gate, had a quiet word with someone, and took me to the press box annex, which was square to the wicket in the lower tier of the Grand Stand. It was Saturday, the third day of the second Test.

This was Lord’s before its architectural renaissance. The brick building at cow corner where members took tea had an ivy-covered tower. Spectators could stand on raised ground behind the low seats where the Warner Stand now rises. I was speechless when I was introduced to Neville Cardus right there.

The cricket that day was predictably one-sided. Barnes hit sixes into the members’ tea room. Bradman began quietly but once into his rhythm, he scored effortlessly. In my memory, the pair have become run-stealers, flickering to and fro; catches were dropped until Bill Edrich finally held Bradman in the slips on 89. At the close, John Arlott wrote that the game retained no more than an academic interest. Australia went on to win by 409 runs.

That day’s cricket is not remembered for England’s humiliation, but for Bradman’s last Test innings

I already wanted more, however, and Rowbotham obliged once again at The Oval on my 10th birthday, which was the first day of the fifth Test. On the steps of the press box, he introduced me to Sir Jack Hobbs, a sweet-natured hero who gave me a quick lesson on oiling my bat. It had rained overnight and when play began at midday Norman Yardley had won the toss and decided to bat. There was, Arlott reported, no evil in the wicket, but Lindwall had got the ball to rise steeply, and at lunch, England were 29-4. Only Len Hutton was impervious to the crumbling morale around him. He scored 30 out of 52, England’s lowest score against Australia. The great Lindwall had taken 6-20 in 16.1 overs.

That day’s cricket is not remembered for England’s humiliation, but for Bradman’s last Test innings. After a splendid opening partnership of 117, Barnes was out for 61, and Bradman, who needed only four runs to take his Test average beyond 100, was cheered to the wicket. Arlott wondered whether his eye might not have been a little misted when he was bowled second ball, having misread Eric Hollies’ googly. A momentary shocked silence was followed by another ovation, but feelings were confused. Like most of the crowd, I was delighted to see Bradman out, but simultaneously, I felt I had been robbed of a grand climax to his Test career.

As for the tear in his eye, the story of Bradman’s last tour suggests that is improbable. Childhood memories undergo constant alteration but the thoughtful revisionist history of 1948 written by Malcolm Knox, a distinguished Australian sports writer and novelist, was published only in 2013. Knox’s Bradman is a ruthless, unforgiving leader, determined to take revenge on a team that had scored 903-7 declared against Australia at The Oval only 10 years earlier. He insisted the team should be unbeaten through the whole summer. 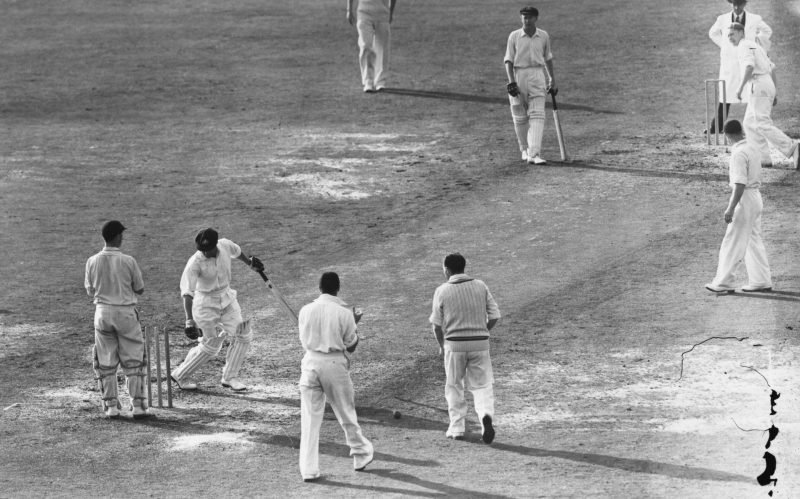 Before the tour began his ambition received a boost by a convenient change in the rule about the availability of the new ball. As it stood, the bowling team could take the new ball only after 200 runs had been scored. In November 1947, MCC’s rules committee announced that in 1948 the new ball would be available after only 55 overs. The decision was taken after receiving comments from Australia and Knox reports that two close English friends of Bradman’s sat on the rules committee, and drew the inference that they might have been manipulated by an old chum.

The outcome was that the threat from Lindwall and Miller became even more potent. The feeling was that England had been disadvantaged by their fellow countrymen, and it did not go away. In 1998, EW Swanton was still fulminating in The Cricketer: “It is hard to believe that England kindly smoothed the path to victory of the 1948 Australians by the availability of the new ball every 55 overs.”

History reveals, but it also obscures, and inevitably encourages idle thoughts. Australia won the series by four Tests, with one drawn. The draw was at Old Trafford, where England led by 141 after the first innings, and left Australia to score 317 to win after declaring at 174-3 in the second innings. After three days, Arlott wrote that England were in an impregnable position, probably a winning one. But this was Manchester and it rained throughout the fourth day and most of the fifth. Match drawn.

At Headingley, England’s batsmen were in such fine form that Yardley declared their second innings closed again, setting Australia 404 to win in 15 minutes short of six hours. Arlott noted that it was 70 years since a Test had been won following a declaration. Unfortunately, England’s depleted bowling attack let down the batsmen, and the fielders, by dropping catches, let down the bowlers. Match lost.

If catches had been held and it did not rain in Manchester, the series could have ended with Australia winning by three Tests to two. This exercise in what might have been does alter the historical perspective. England were not quite so poor as the results suggest. But the record books are not wrong. The tourists were unbeaten in 1948. The captain became Sir Donald; and, having won the series 4-0, the team is properly known as The Invincibles.