Spinner, selector and after-dinner speaker Geoff Miller holds court with his career highlights in an exclusive chat with Henry Cowen.

I remember this vividly. I was seven years old and I went downstairs – we lived in a two-up-two-down in Chesterfield – at about 4:30 in the morning because I’d heard some noises and it was my father sorting the ashes in the fire for the day’s heat. He was listening to the radio and I asked him what he was listening to. He said: ‘It’s the Ashes, it’s England v Australia.’ I remember that Fred Trueman was bowling to Norman O’Neill. I asked him what cricket was and he said: ‘This is cricket, this is what cricket’s all about. It’s England playing in Australia. Just imagine, one day, I could be listening to you playing for England in Australia’. And I remember walking out at Sydney in January 1979 thinking, ‘My dad will be listening to this.’

An old fellow called Norman Vicars taught me the real basics and fundamentals of the game when I was really young and was then honest enough to say, ‘I can’t take you further’. Then a fellow called Jim Brailsford, who is still alive, took me on to Chesterfield Cricket Club and eventually Derbyshire and he was absolutely brilliant. Then he was honest enough to say, ‘If you want to be an international cricketer, you’re going to have to talk to someone else, and let them take you on, because it’s not just about the technical side, there’s also the mental side’. A week later, out of the blue, Eddie Barlow signed for Derbyshire, and he was the man who just took me up into international cricket.

Michael Holding got 14 wickets in the game but didn’t get me out! In the first innings I was out to Vanburn Holder and in the second innings the new ball was due, so I made sure I got out to Viv Richards just before! It was a daunting experience to play my first Test against a side like that. Over a period of two or three years they may be the best team there’s ever been – the recent Australia side would run them close, but I think their attack would have just won it for them. My first wicket was a long-hop to Roy Fredericks – no longer with us, god bless him – which Chris Balderstone caught at cover, diving full length.

I think it was the act of a nervous man in the 90s, to be honest, as opposed to a selfless man!

Obviously it’s disappointing because I made something of a habit of getting to 90 for England and I never got a Test century! This one was slightly frustrating, looking back, because the tail-enders did hang around – Bob Willis in particular – and we turned down singles and runs which, if we hadn’t, may have meant I got my hundred. Having said that, the situation was necessary for me to turn runs down. They had a good attack, it was Abdul Qadir’s debut and he was something we hadn’t seen before, so I was pleased to get that score. That would have been my first first-class century. It took me about 380-odd innings to get there. I got to 90 about 10 times – I think it was the act of a nervous man in the 90s, to be honest, as opposed to a selfless man!

Sydney had a reputation for turning and we just thought that if we could get a decent total then John [Emburey] and I may be able to utilise the conditions; fortunately, it went according to plan. I don’t have the ball from that match, it was about the win and I have always been of that inclination. I was a ‘bread and butter’ player, which allowed the flair players to play with freedom. My job was to put us into a good position and give us a bit of freedom to win games. That’s how I felt anyway, that’s how I saw myself. 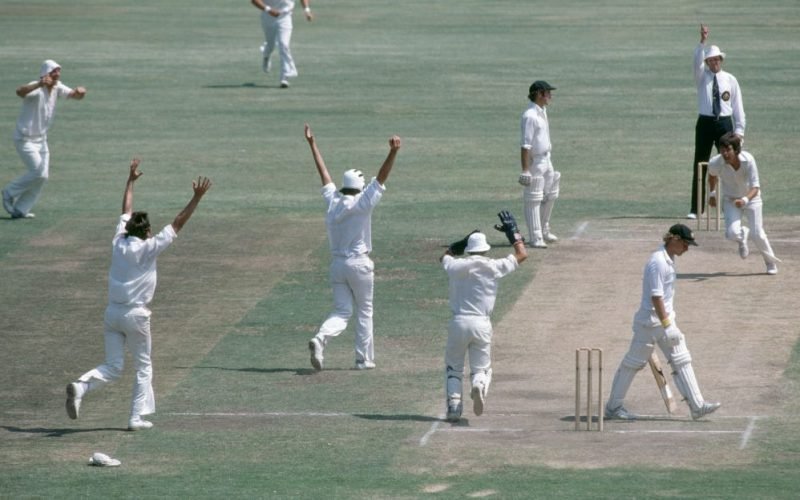 This was one of my biggest moments. Derbyshire hadn’t won anything since 1936 and we went to Lord’s for the NatWest Trophy final against Northamptonshire. I was in at the end with Colin Tunnicliffe – a good mate of mine and a Derbyshire lad – and together we won the game for our home county. We needed one run off the last ball to win the game so I ended up running down, diving in, and we just got there! We won that final on fewer wickets lost and we’d done the same thing in the semi-final against Essex so we managed to win the trophy without winning either the semi-final or the final! To win it for Derbyshire, with two Derby lads in at the end, was really special.

I played quite well here actually. I was batting with Ian [Botham] for quite a while; I think he got 120 and, if I remember rightly, he ended up batting with half a shoe on because he was in such pain having been hit by a yorker. He smashed it everywhere and I just kind of bread-and-buttered it around for a few. I was on 94 when Dilip Doshi bowled me a long-hop outside off-stump and I cut it for four. Then I thought, ‘I’m on 98 now, and I haven’t given a chance, and it’s a decent wicket’, but then they brought in a silly mid-off and a bat-pad from nowhere – just to create pressure. Dilip came in and bowled and instead of just coming down and smacking it – which, in hindsight, I should have done – I went to block it and got a big nick to be caught at silly point. Dickie Bird was umpiring at the time, and he couldn’t believe that, having never scored a Test century, I didn’t wait for a decision and instead walked off when I was on 98. He’s said to me many times that he doesn’t think he could have given me out.

It was the club’s decision so I didn’t know as I left the field that it was my last match. I didn’t bat and I got 0-120 or something like that. There might have been a wicket, but I doubt it. I knew it was time, really, and they knew it was time. But I’m proud: to have represented my country, what an honour that is. It’s a dream come true – and then to be in a position where I became national selector, telling people that they’re going to play for England. From the humble beginnings of listening to my father by the fire as a seven-year-old – and when I’d had three jobs since leaving school: playing cricket, talking about cricket and selecting the England side – there’s one or two people who would give their right arm to do that.

I was able to take pleasure as a selector but my thoughts were always, ‘We’ve got to continue this now, what’s our next series, where do we go from here?’ Our job was to try and produce players for the coach and the captain, to produce players who could do a job for them so that we could complete that job and then move on. I was never a great trumpet or fanfare man, I just always wanted to get on with the job behind the scenes and give them the opportunity to do their job with the best players possible. There are a few players I look at and think, ‘I’ve had a lot to do with that’, and, you know, the players know who they are.

People often say how lucky Chris Tavaré was but what they don’t realise is how low and slow the pitch was and how close we were in the slips. In the final innings we had them nine down needing about 70 or so. On the final day we knew the new ball was due so we weren’t too worried about it, but they kept getting closer and closer. They needed 10 to win when Bob Taylor said, ‘Look, at least half a dozen in this innings have not carried, we need to get closer to make sure it carries’. So we did. Bob moved forward two yards and Chris’s measurement was to be level with him so he went up two and I went up one. It was the new ball and Botham had just come on. We were two yards closer than we really should have been so it just hit Chris and burst through his hands. Fortunately it hit his shoulder and dollied up and I caught it. I remember catching the ball and throwing it miles up in the air, then running off, arms up with the sun hat on.