Two stylish left-handers who helped rejuvenate the England team and bring silverware back to south London, Graham Thorpe and Mark Butcher look back on the highs and lows of international cricket, their trophy-laden days at Surrey and supporting each other through personal strife.

Did the two of you spend much time together in your early days at Surrey?

MB: Hardly any time at all, in fact. Thorpey had a really great first full year in 1989, then he went on a couple of England A tours and I didn’t make my first-class debut until 1992. In those days the second team and first team very rarely saw one another. We knew each other but that was about it.

Open Account Offer. Up to £100 in Bet Credits for new customers at bet365. Min deposit £5. Bet Credits available for use upon settlement of bets to value of qualifying deposit. Min odds, bet and payment method exclusions apply. Returns exclude Bet Credits stake. Time limits and T&Cs apply. The bonus code WISDEN can be used during registration, but does not change the offer amount in any way. Bet on the IPL here. 18+ please gamble responsibly

GT: I remember a Sunday League game against Glamorgan, I think Mark’s dad Alan was playing against us, and Butch got some runs [48*] as an 18- or 19-year-old. That was the first time I came across him.

What were your first impressions of one another?

MB: Obviously Thorpey was a terrific player. He was very quiet though – he kept himself to himself. By the end of his career he was fantastically sociable and gregarious, the life and soul, but at the beginning he was almost the exact opposite. He was like two different people in that sense. It kind of paid to be that way at that time though, players weren’t treated particularly well and you were always a bad knock way from getting dropped. It made people more insular, more selfish I suppose. He went through a real change in his outlook to other people and being part of a team.

GT: That describes me pretty well through the course of my career. I wasn’t massively outgoing when I first came into the dressing room, I quietly went about my business. As a young player, when you’re wanting to do well, wanting to score runs, you can get wrapped up in it. But as you go through life and things happen to you on and off the field, you don’t take it quite as seriously and you’re able to cope with the bigger occasions because you get some perspective. Certainly the last five years of my career I was very much wanting to do a lot more in terms of helping out other players and I liked a bit of fun in the dressing room. I always had a good impression of Butch as a batsman. He had a solid technique, he had some calypso shots off the back foot, and he was a handy bowler in those days too.

What was the culture of the Surrey changing room like in the early Nineties?

GT: Surrey was quite old-fashioned. We used to have two dressing rooms and you had to go and knock on the first-team dressing room door until you became a capped player.

MB: That didn’t go away until 1996 when Dave Gilbert became coach. All the senior players very much looked out for number one and that perhaps accounted for the fact that Surrey had been a bunch of very talented individuals for a period of time but had never actually come together and won anything.

GT: It did change, though. When Adam Hollioake was captain and Gilbert came over from Australia one of the first things we wanted to change was to open up the dressing room. That was a big change.

MB: When Adam and I got into the side and started playing regularly together from 1993 or 1994, we were quite noisy really for a couple of youngsters and weren’t afraid to give some of the older players a bit of jip. We very much believed that if we were going to be a successful side, and remember Surrey hadn’t won a trophy since ’82, we had to ditch this ‘everything is about me’ attitude. 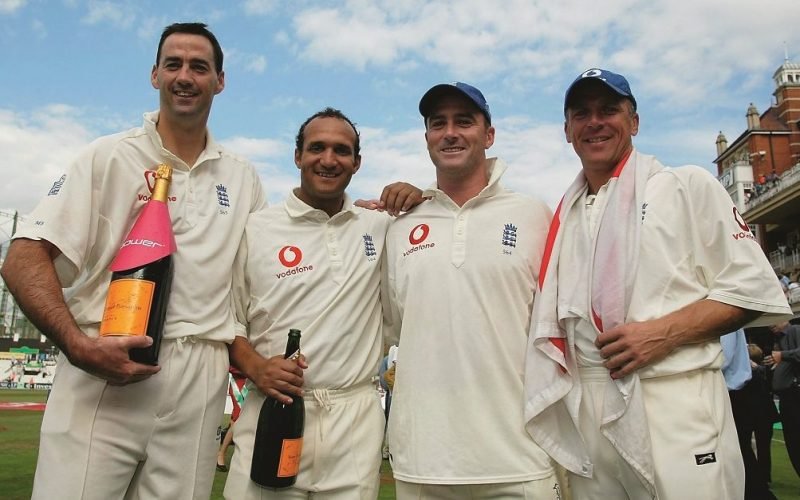 And then the trophies started coming – three Championships in four seasons between 1999-2002 and also five one-day titles. What were some of your highlights together?

GT: Singing the team song was certainly one. Adam decided we needed one and we came up with it ourselves. We all had certain parts in the song and the main three performers in a win would get a mention in it. I used to play my part by hitting stumps together – those are some of the best memories. I remember when we won the Championship against Nottinghamshire at The Oval in 1999 staying in the dressing room long into the evening.

MB: In terms of partnerships, I remember a big one between us against Hampshire at Guildford in 1999 when we won our first Championship. We were asked to follow on and I remember we said in the dressing room that was a mistake. We scored 490 or something [Thorpe 164, Butcher 94] and then rock ‘n’ rolled them in the last innings to win the match. We gave them an absolute shellacking.

What are some of your fondest memories of playing together for England?

MB: We had such a blast on the tour of the West Indies in 2004. We won the first Test in Jamaica with Harmy’s heroics and then moved on to Trinidad. We were chasing 120 or something [99] and Nass [Nasser Hussain] and I were not out overnight. We didn’t have many to get the next day but it was still tense, as it always is when you’ve got runs to get the next day in a Test match, so Thorpey and I said, ‘Sod this, let’s have a couple of rum and cokes in the hotel bar’. We had two or three – maybe one too many.

GT: I remember Butch saying, ‘Nass, you’re better off having a few drinks because you’ll only regret it if you nick off tomorrow’ but he said he had to go to bed. Lo and behold, next day Nass walks out and nicks off second ball!

MB: Thorpey and I romped home, smashed it to all parts and wandered off grinning our heads off . There’s a photo of us walking off laughing because I’ve just turned to Thorpey and said, ‘We bloody told him!’ 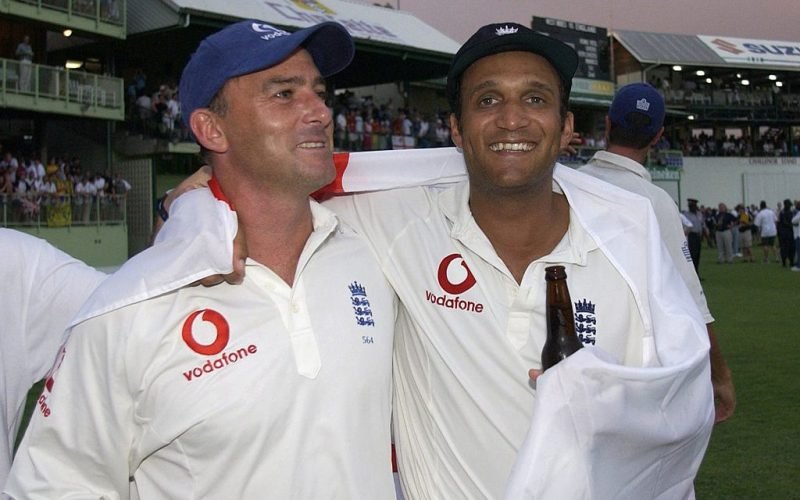 What made that tour so special?

MB: We were just starting to realise we were a bloody good side. We’d come back to win the South Africa series in 2003 and we’d seen off a few other sides. We had Harmison, we had Jones – some real firepower in terms of pace bowling – Tres and Vaughany at the top of the order who could go out and take the opposition on and then there was me, Nass and Thorpey in the middle – the old gits trying to put the fires out when required! We had a fantastic work ethic too. I remember during the South Africa tour in 2004/05 feeling a bit let down by the fact that it didn’t feel the same as the West Indies tour. Already by then it had moved along. Fred and Harmy had become big heroes and it just felt as though the hunger that we had in preparation for the West Indies series wasn’t quite there. Obviously they went on to win the Ashes without us in 2005 but we all saw how quickly it disintegrated after that. It felt to me as though we never got back to the great thing we had on that trip, but that’s just my view on it.

Did you know the two of you never had a 100-partnership together for England?

GT: It did seem that Butch would score runs on one occasion and I wouldn’t and then I’d score runs and he wouldn’t, but I do know he was one of my favourite No.3 batsmen. He had a great temperament – he was very calm and laid-back. I remember at Sabina Park in 2004, Butch was facing Tino Best and Fidel Edwards and they were bowling quick. He just kept wearing them on the arm and when he came off at lunch he had three ice packs as these bruises the size of melons started to appear. He was a hard bugger was Butch and very phlegmatic in his approach to facing fast bowling. I wouldn’t have wanted anybody other than Butch ahead of me at that stage – my ideal No.3.

I wouldn’t have wanted anybody other than Butch ahead of me at that stage – my ideal No.3

When you first saw Mark play did you expect him to go on and play 70-odd Test matches?

GT: Butch wasn’t a guy who was going to die wondering, or die stressed for that matter! That’s a really important thing to have at Test level, having that temperament that allows you to handle yourself and stay calm. If he hadn’t have got injured he would have comfortably played 100 Tests. His downfall was probably buying into the England fitness regime of that time. He always used to be able to train in his own way but he got into the fitness stuff in South Africa in 2004/05 and hurt his wrist doing some tricep dips. He should have stuck with a pint and a fag at the end of the day and not worried about the gym!

You both had to cope with personal issues during your playing days. Did you help each other out in those difficult times?

GT: Yeah, we both knew what it was like to be on the wrong side of some tabloid press and obviously both our first marriages didn’t work out. When you’re an international cricketer it puts strains and stresses on your life so we were very supportive of each other and understanding of the challenges which you face at that level. We certainly had our difficult moments as individuals.

MB: There was an odd episode, and I still don’t quite understand to this day what happened, but there were phone calls being made behind closed doors and there was a falling out between our wives. Thorpey and I had a big row and the whole relationship seemed to break down, in 1999 probably. Later that year my whole life had been turned upside down and I remember having an absolute fit on the ground at The Oval, just completely losing it, throwing my bat up in the air and storming off. I was in a right state. I remember Thorpey and I coming together and chatting for an hour at the ground, talking about the fact that the relationship was fine, that we were mates and everything was ok.

Related Story: The Don Bradman comeback that took down both Merv Hughes and Patrick Patterson

GT: When you see a teammate upset you want to make it right and I think we are both pretty compassionate people. Occasionally you have fallouts with teammates but we realised that we were good mates and luckily it wasn’t one that went on for a long period of time.

MB: He helped me out a lot and then vice versa in later years when he was going through his problems. We’d both been through similar things in our personal lives and that brought us closer together. There’s a lot of mutual respect there – I still think that he was the best batsman I played with for all conditions.