Boasting a glittering treasure chest of highly paid international talent, Surrey strutted their stuff all over the county game during the club’s turn-of-the-century glory years, as Ed Kemp recounts.

Since their seven consecutive County Championship titles between 1952 and 1958, Surrey’s trophy haul had totalled one Championship in 1971 and a couple of one-day trophies, the last of which in 1982. After years of unfulfilled promise, by the late 1990s the club – under the captaincy of a new, dynamic leader – were ready to start winning again.

Adam Hollioake: We had a good side but we weren’t getting great results. I think we just got sick of people not taking us seriously.

Martin Bicknell: It was a gradual build-up. In 1996 when we won our first trophy for god-knows-how-many years, there was a realisation that the team was coming together and building nicely, and it was just a matter of time from that point on before we won the Championship, which was our ultimate aim. It didn’t materialise for a couple of years. We had a couple of close shaves in ’97 and ’98, where we knew we were getting better but couldn’t quite get there.

Adam Hollioake had been the regular stand-in for the frequently absent Alec Stewart for a couple of seasons before taking over officially as club captain in 1997. He and new Australian coach Dave Gilbert opened up what had been a comparatively joyless and hierarchical regime under Grahame Clinton.

Alex Tudor: In 1995 Surrey still had the first team changing room separate from the second team changing room and you had to knock on the door. Dave Gilbert got rid of that wall and said, ‘You’re all one team’. That was the best thing that ever happened for the club. 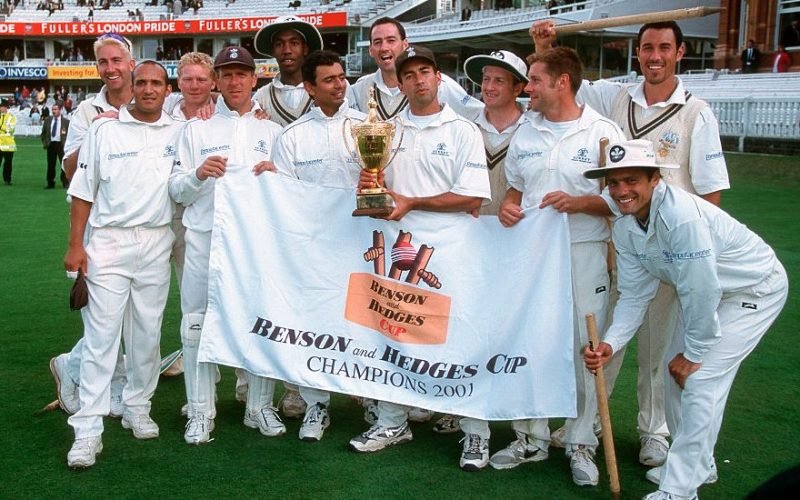 AH: I tried to take the discipline out of it a little bit. I don’t think we needed to be so harsh and serious about everything – we all wanted to win, it was a case of relaxing and letting the personalities we had be themselves. I’m not claiming to be some sort of guru here, they were all seriously seasoned players, guys who’d played international cricket. It didn’t need me cracking the whip and getting them to jump over hurdles or do some frigging tai chi. We just let them do what they knew they needed to do. And Medders [former Surrey player Keith Medlycott, who took over as coach from 1997 until 2003] was a really relaxed coach – that was one of the reasons why we wanted to get him on.

With a more relaxed culture established and a generation of internationals all hitting their peak, the signing in 1997 of Saqlain Mushtaq, the world-beating Pakistan off-spinner and inventor of the doosra, completed an intimidating line-up. He would join Ian Salisbury – the prolific leg-spinner signed from Sussex the same year – in a two-man spin attack.

“A lot of overseas players don’t really get a chance to become part of the fabric of the club because they’re not around for long enough. But Saqlain wasn’t just an overseas player, he was a Surrey player.”https://t.co/swRVbvKj1h

MB: Bowling at the Oval was fairly unrewarding at times so we needed spin options. Once we got all the things in place it just felt like winning was a natural thing to happen next.

AH: I’d played against Saqlain in ’96 when I made my England debut. That’s when I said, ‘We’ve got to get this kid’. Everyone was like ‘What? We’ve got Waqar’ [who had taken 232 wickets for Surrey]. I was like, ‘No, we need a spinner’. If you look at the history of who’s won the Championship back to back or three or four times, they’ve had two spinners. Emburey-Edmonds, Childs-Such, Laker-Lock. It just made us a very well rounded side.

AT: Saqlain was the final piece in the jigsaw that made us a quality side. In the first innings Bickers and I would get a lot of wickets, and in the second innings it was, ‘You’ve got the new ball and that’s it, you may not bowl again’. Sometimes after we’d bowled our first spell we’d be calling up to the changing rooms for our half-and-half spikes because we knew Saqi and Sals would sort them out, and more often than not that’s what happened.

AH: Whenever Saqlain was bowling in ’99 and we had four or five men round the bat – you just knew he was going to get people out. No one knew what was going on. Between 1997 and 2000 he had to be the best bowler in the world. I wouldn’t have taken anyone else ahead of him in those years. These were professional players and they just didn’t know what he was bowling. I didn’t know! None of us had seen this s*** before. All of those guys were once-in-a-generation cricketers, but that guy was special. I was proud and privileged just to witness that. 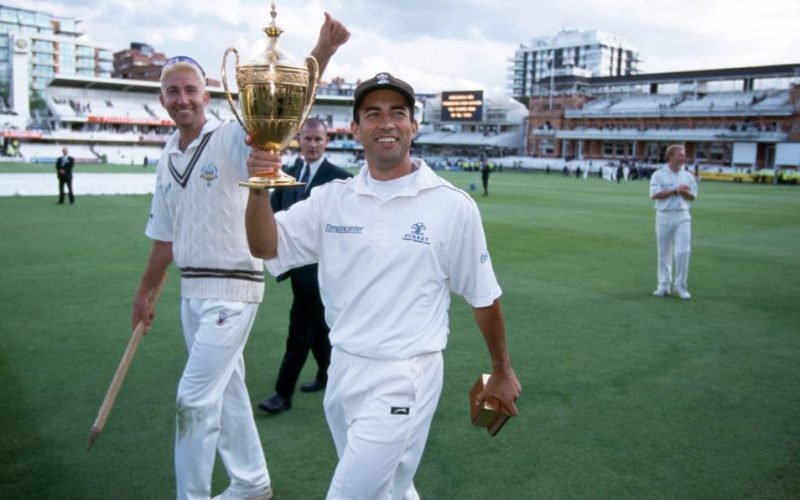 Hollioake knocked the strutters into shape

Surrey became one of the most brutally dominant teams in County Championship history. Across their ’99, ’00 and ’02 Championship-winning seasons (with 12 draws out of 16 they came fourth in 2001) they played 49, won 31, drew 14 and lost just four.

MB: In 1999 we played outstanding cricket but I think the best cricket we played was the year after. After we lost two out of the first three games, we won seven or eight in a row in the middle of the season, when we were literally unstoppable. There was a build-up of belief in that side in 2000 that we were just unbeatable. We beat Leicester twice, who were the other outstanding side at the time, at Oakham and at Guildford [where Bicknell took 16 in the match]. They were the nearest side to us and we just destroyed them twice. At that point we just felt like, ‘We are the best team, we know we’re the best team, we’re just going to go and win’.

AH: We were going up to Durham, and it sounds arrogant in hindsight, but I remember saying, ‘OK, we’re going to beat these guys, let’s make sure we get all the bonus points’. I remember knowing we were going to beat sides and the only thing that was going to stop us was the weather. That’s unusual in professional sport.

AT: Teams just knew when we turned up they weren’t going to beat us. I always remember us playing Lancashire in the early part of the season. Butch and Ward opened the batting and by lunch Lancs already had sweepers out – they didn’t want us to get too far ahead of them. 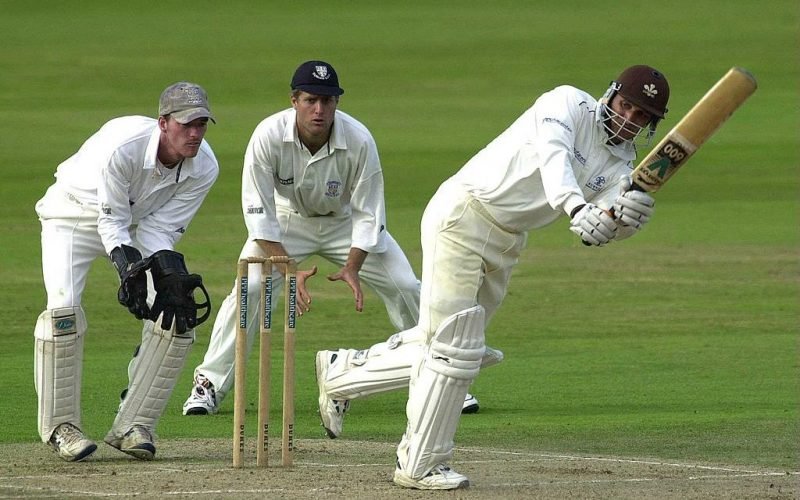 MB: We went to Nottingham in 2003 and had to leave out two internationals because we just couldn’t fit them all in the team. I remember at the toss of the coin their captain Jason Gallian went down the lists and every one of our players was an international and Notts had no internationals. It was just like, ‘Wow, how are we going to compete?’ And they didn’t – we won. We just had better players.

However strong his group of players, Hollioake’s impact as captain had been immense – right down to the introduction of a team song.

AH: It was the theme to the Beverley Hillbillies, we changed the words from that to all Surrey-centric lyrics and the three best players from the game would get their names in the song. More than anything, we pissed the opposition off because we’d sing it so loud they could hear most of the time. It was probably the first in county cricket, but it had been going on in Australian grade cricket for a while.

MB: Adam was the sort of bloke who, if he told you it was night time and it was the middle of the day, you’d believe him. You’d run through a brick wall for him because you believed totally in what he was saying. It might be bulls*** half the time, but it was easy to play for him, because if you put in 100 per cent then he’d back you 100 per cent.

AT: He’d be the first to admit that he wasn’t a tactical genius but he would never ask you to do something that he wouldn’t do himself. If there were runs that need to be scored fast he would go in there and bat, if Saqi and Sals were bowling and we needed a man at short-leg, he would go and do it. If someone was getting some runs, he’d say, ‘I’ll take the ball and try and take a wicket’. He was great for that team because there were a lot of egos in there, some big personalities and he was the one man that was able to keep them all playing together. Because a) everyone was scared of him b) he had that respect. And he kept things quite fresh, because he had a pretty small attention span and he got bored quite easily. 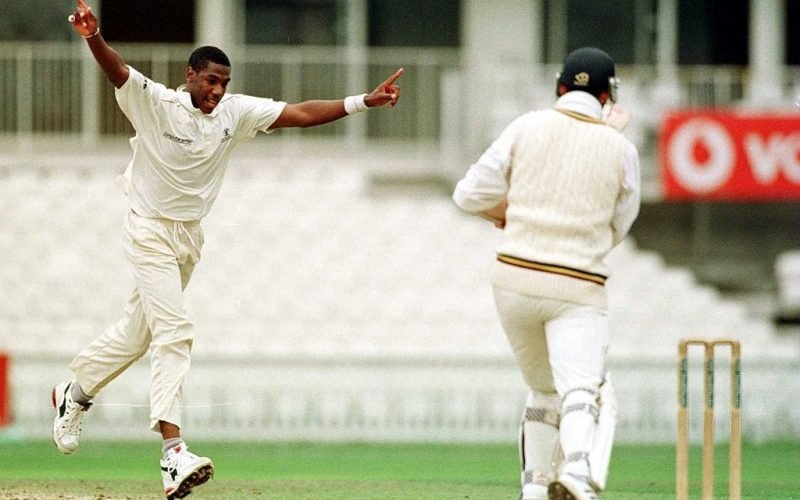 AH: People say, ‘What was the best thing about your captaincy?’ I say, ‘I had the best batsmen and the best bowlers in the country’. It was just a case of letting them express themselves, with the right mixture of discipline and relaxation. Recognising the times to work hard and really getting your head down and realising the times when you could let your hair down – and approaching that with equal vigour!

I wanted to remain positive and attacking and let the opposition know we weren’t there to mess around. They could tell everyone they hated us or call us ‘The Strutters’ or things like that, I was like, ‘Yeah, we don’t care, we just want to win. We don’t want to be popular anyway’.

AT: People didn’t like us. We’re from the south and the guys liked their clothes and going out and all that sort of thing. But you’ve got to be able to back it up. There’s no point strutting when you’re not performing. But our guys were – and I suppose you earn the right. Sportsmen do have an air of confidence. Stewie would have his collars up… we sort of walked round like we owned the place… and for about five years we did. The problem came when the team got a bit dismantled, people retired, maybe the younger ones after us started trying to do the same but their performances weren’t backing up the strut.

Although they won two one-day trophies in 2003, including the inaugural Twenty20 Cup, Surrey fell away in the Championship and as the golden generation of players neared the end of their careers, the glory years were over. 2004 saw the departure of Medlycott as coach and the resignation – and later, retirement – of Hollioake. The club wouldn’t win any more silverware until their CB40 victory in 2011.

Related Story: Ian Salisbury on snaring Botham, the Saqlain partnership and his hundred against Warne

MB: We probably didn’t do enough squad planning. We had to let Ian Ward go, because we had so many internationals getting paid a lot of money that the budget got tight, and from that moment on it sort of fell apart. The problem was always: how do we get people in who are not as good as the people in the team? Your Rikki Clarkes, Scott Newmans, Tim Murtaghs and James Bennings weren’t getting enough time in the first team because you just couldn’t leave out the guys above them.

AH: I didn’t enjoy my cricket much after my brother died [all-rounder Ben died in 2002 at the age of 24]. My best asset was that I handle stress pretty well, but after my brother died I didn’t have that same coping mechanism, and I didn’t want or have to put up with the stresses of being captain or playing anymore. But I thought we’d still carry on being dominant for a few more years than we did.