As West Indies quicks roamed the country in the Seventies and Eighties, hungry for wickets and scenting blood, county cricket was no place for the faint of heart. In 2012, John Stern spoke to the men at the other end of the onslaught.

Back in the Seventies and Eighties, West Indian fast bowlers were like opinions. Everybody had one. These were the days when an ice-bath was something you chilled the beers in. These were the days before Twenty20, before IPL, before central contracts, before the international schedule became a 24/7 treadmill.

The world’s best cricketers in the world had the time and the inclination to hone their skills on the county circuit. It was great for the punters but it wasn’t so great for the blokes who had to face Michael Holding (Lancashire and Derbyshire), Malcolm Marshall (Hampshire), Joel Garner (Somerset) or Sylvester Clarke (Surrey). The list goes on.

Helmets were still a work in progress, County Championship matches lasted three, not four, days so pitches could be a bit spicy and there were no restrictions on the number of bouncers per over. So what was it really like standing 22 yards away from a West Indian quick in full flight?

I made my Championship debut against Middlesex with Wayne Daniel in their side. I remember this gold medallion he wore flapping round his neck as he ran in with his shirt unbuttoned to just above his navel.

My helmet just used to have these little side-pieces covering the ears. It’s unbelievable to think about it now. It was only after I faced Sylvester Clarke on a not very good wicket at Trent Bridge that I first wore a visor. He was quite scary and gave the impression that he would rather hurt you than get you out. He had a whirlwind action so you couldn’t always see where the ball was coming from.

I can’t remember the West Indian bowlers saying very much to me. I was lucky enough to get 200 against Michael Holding at Derby and I know he said quite a lot to the batsmen at the other end about me, like “Does this bloke know what he’s doing?” I tried to survive against Holding and then score runs against the likes of Martin Jean-Jacques, Ole Mortensen and Roger Finney. You looked at other bowlers in a slightly different light.

“There were times when I had to take the pitch out of the equation. At The Oval in 1976, when I took 14 wickets, I mainly bowled yorkers.” https://t.co/fBPqlusV9d

In some ways, the speed was an advantage. Often you played on pitches that weren’t that quick and if a fast-medium bowler bowled you a bouncer it seemed to take an age to get to you and you’d get yourself in a tangle. Whereas if Ian Bishop (Derbyshire 1989-92) was pushing off the sightscreen and he let you have a couple, it was in the keeper’s gloves before you had time to worry about it.

Bishop was quick and had such a long run that you didn’t look up until he got about halfway through, otherwise you’d have worried yourself into oblivion by the time he got into his delivery stride.

I played against Sylvester Clarke once in my fourth first-class game on a quick pitch at The Oval. I had this really thin Mitre thigh-pad that was only one step up from a rolled-up towel. I got peppered and my leg was twice the circumference it was when I’d gone out to bat in the morning. [What Alan didn’t tell us was that he made 125 not out].

Everyone’s up for it and hoping they can meet the challenge. To face the best bowlers in the world was a fantastic experience. 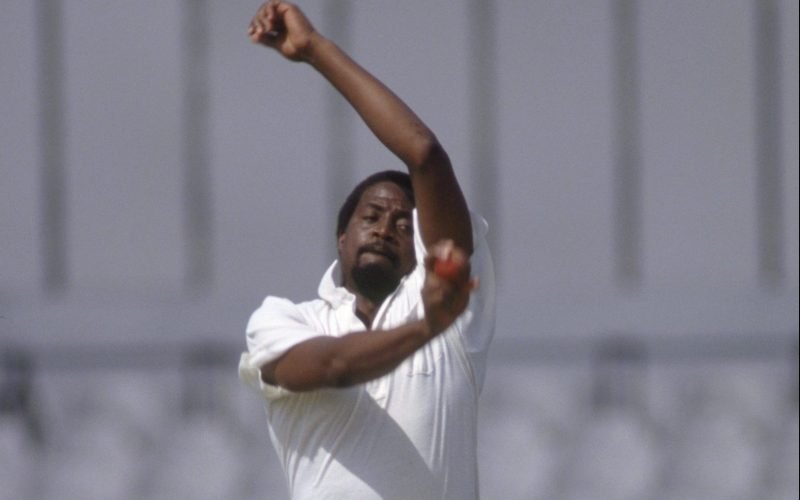 Wayne Daniel was the man at Middlesex and in 1981, we actually had him at one end and Jeff Thomson at the other, which was interesting. You were just very glad they were on your side rather than the opposition.

Keeping to Wayne, I generally stood 20 to 22 yards back but at Hove one time I was at least 24 yards back. It was a one-day semi-final against Sussex [Gillette Cup, 1980] and it was the quickest he ever bowled. Imran Khan had hit him on the head when he was batting, which wasn’t a good idea. Wayne was absolutely fired up, indignant at Imran. He roared down the hill there and won the game for us basically [Daniel’s figures were 10-2-15-6]. At Hove, the players watch from side-on so to see the ball flying through to me at head height would not have been what an incoming batsman needed to see.

I played 16 of my 30 Tests against West Indies, which isn’t great for the records, and opened at Edgbaston in 1984 when the opener Andy Lloyd was hit on the head in the first innings [Downton made 56 against Marshall, Holding, Garner and Baptiste].

It came down to concentration and not trying to play too many shots. I had a lot of padding on and the adrenalin was certainly flowing. It was intimidating but in the end you were driven by fear of failure rather than physical fear. On some occasions when the pitch was really spicy you would wonder how you were going to cope.

At Hampshire, we had Malcolm Marshall and Gordon Greenidge. Whenever we played against a side that had West Indians, like Somerset with Viv Richards and Joel Garner, Maco and Gordon would up their game.

Even in the nets when Maco bowled to Gordon they treated it like a Test match, regardless of the quality of the surface. They would go at it hammer and tongs. The problem came if you were bowling in the same net. Maco would charge in and Gordon would play him accordingly. Then I would have a bowl and he would play me accordingly but the results tended to be somewhat different. Both were in a different class. There were certain players – no names – who didn’t like facing Maco in the nets.

I opened the batting for a couple of years when Hampshire were rebuilding. I hadn’t done much of it before so I used to go out there with my second XI cap on. By the following year, 1981, I was wearing a helmet. Once you got used to the pace it was a really exhilarating experience. I used to get nervous, but then I was nervous whomever I was facing.

It was just about survival. I could defend but I didn’t have a great array of shots. When I batted with Gordon he would protect me. He also liked to take the bowling. In one game at Old Trafford on a flat pitch we put on 70-odd for the first wicket of which I made four. Gordon would always look to take a single off the fifth or sixth ball of an over.

‘They say you should not get to meet your heroes as they are likely to disappoint you. Maco never did.’

Back in 2009, Ben Dobson wrote about Malcolm Marshall – a smiling Bajan revered as one of the world’s greatest-ever fast bowlers.https://t.co/NQHD8UrMxA

My height (6ft 2in) was a bit of a hindrance. I always struggled when the ball was well pitched up or yorker-length; though my teammates would say I struggled against all types of bowling.

I used to play a lot of the time with my gloves, like a boxer. I played with very low hands anyway and I was always fending them off with my gloves.

Bowling with Maco was great. If you could keep it tight with him bowling at the other end you would benefit. Even the sight of him warming up might be enough. As soon as the opposition saw him rolling his shoulders over or doing a few hamstring stretches they started taking liberties and you could pick up wickets. He would regularly nominate how he was going to get each of the opposition’s batsmen out.

Of all the hugely talented fast bowlers to have graced county cricket, Barbadian Sylvester Clarke is widely regarded by batsmen as the toughest, if not necessarily the best, they ever faced.

Clarke, who took 591 wickets at 18.99 for Surrey between 1979 and 1988, had a lethal combination of pace, skill and a streak of malevolence. In 1980, playing a Test for West Indies at Multan in Pakistan, Clarke was showered by oranges and other missiles from the crowd. He responded by throwing a brick into the crowd, which hit and seriously injured a student.

“Sylvester Clarke was a bit special and seemed to do well against us regardless of the conditions,” says former Hampshire all-rounder Tim Tremlett. “Sometimes he wouldn’t even bother to wear boots. He would just wear trainers and amble in off seven or eight paces but was still absolutely lethal. He had a very quick arm.”

He died in December 1999, a week before his 45th birthday. Only weeks earlier he had been among the mourners at the funeral of Malcolm Marshall.

In about 1980 I went on a private tour to Pakistan. Pakistan were just about to go to Australia and they wanted practice against quick bowling. There were some West Indians on that tour, including Michael Holding.

We played in Karachi on a quick pitch and Mikey was bowling bouncers to this kid, who kept taking him on. He bounced him again and the kid hooked him again. I was standing at mid-on and Mikey came by. He just looked at me and sucked his teeth. So he bounced him again and this time the kid got halfway through his shot before the ball clattered into his head. It turned out the kid was a young Salim Malik and as he was taken off the field, Mikey turned to me: “Too late Selve, too late.” 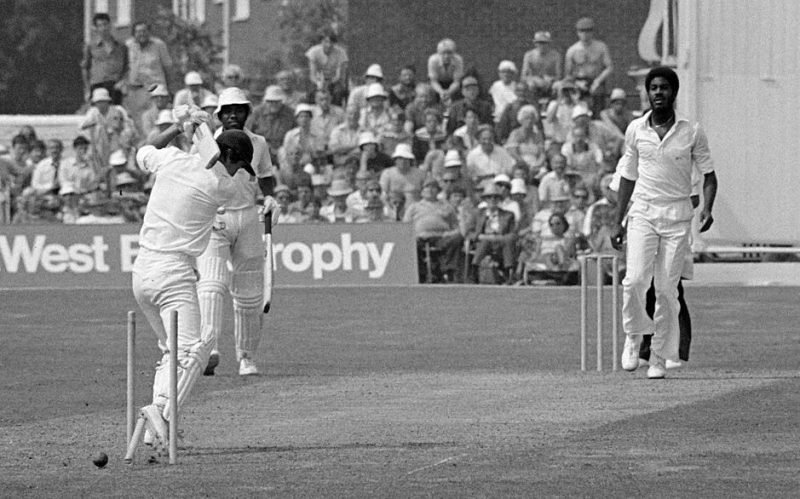 Hampshire’s Bobby Parks is cleaned up by Michael Holding at Southampton, August 1981

In 1984, I was playing for Glamorgan facing Mikey at Swansea. I was carving away, trying to find a way of scoring some runs. I’d made a few and he bowled this thing to me. You have to imagine that there is someone who can bowl so fast that even though you never lose sight of the ball (you saw it all the way with Mikey because he was such a pure bowler), it was so fast that you just didn’t have the time to react. It was short, it came up and self-preservation took over a bit, I just pulled my head back a little bit. This thing just pinged off the Perspex visor we had in those days and went through to Jeff Dujon. Mikey came through and said to me: “Too late, Selve, too late.”

For somebody like me, it wasn’t so much that they were frightening, it was that they were so fast I just didn’t have the ability to react to it. The first ball I had in Test cricket was from Mikey at Old Trafford. There was no one anywhere near me. The keeper and slips are miles back and Mikey was nearly out of the bloody ground at the Warwick Road End. Miles away. He let this thing go and I jabbed my bat in the way and it ricocheted past him for two. My first Test runs were a straight drive for two off Holding. But the ball hit the bat rather than the other way round.