by Aadya Sharma
@Aadya_Wisden November 8, 2021 - 3:21pm 10 minute read
This article is live and being updated, please refresh your page to see the updates.

Welcome to Wisden’s match blog for the live coverage of the India v Namibia T20 World Cup 2021 fixture – follow this space for live updates from the venue in Dubai, including commentary and score, and where to watch details: TV channels, broadcast and live streaming for IND vs NAM.

India win! Three wins on the trot after the disappointment against Pakistan and New Zealand.

KL Rahul, too, gets to his fifty.

Just the six to win now.

Not far now for India. Rahul continues to flourish, and Surya hasn’t been challenged at all. Quite a robotic chase from here.

Some delectable inside-out drives from SKY right after he was sent in.

Suryakumar gets a promotion at No.3. It’s an opportunity for him to get some runs under his belt ahead of the New Zealand series that he’s likely to feature in.

Rohit goes after a fine fifty! Not his best 50, given the chances on offer, but he does his job.

56 needed off 66. India coasting along. Frylinck is back for another over. I was half-expecting him to open the bowling today. Also, I feel they have been guilty of bowling too short to these two. There could have been much more for them if they had Rohit driving more on the off-side.

Over 7, India 63-0: Rohit-Rahul continue to motor along

Not the best of lengths from the seamers, who continue to feed the side lengths that they can easily send away. Just the 70 runs to get now and the target suddenly appears must shorter.

Some spin in the form of Bernand Scholtz, but these two are continuing their free-flowing game, and have crossed 50 inside the powerplay. There have been a couple of close calls, but nothing big enough to separate them.

Such class these two exude when they are doing well. Rahul’s flick six over deep midwicket is a thing of beauty really. And he looks so comfortable generally against pace in the powerplays.

Both openers are now looking to guide the ball over the infield, also using the depth of the crease to create angles. The Namibia bowlers are also maintaining a channel on the body: perhaps, a more off-stump length approach could help here.

Rohit has now crossed 3,000 runs in T20Is. Only Kohli and Guptill have more.

It’s surprising how Rohit can switch from being ungainly to elegant in a matter of moments. A swivel-pull lands him a massive six over long-leg, after a couple of deliveries where he looked a bit out of touch.

Left-arm seamers have troubled India in global stages for years, and while it would be unfair to equate Trumpelmann with other experienced names, he almost ends up giving India an early scare. Rohit is dropped. He survives. A first-over wicket would have been big!

They started well, but lost wickets in a bunch to quality spin, and with a three-pronged attack, there was no let-off. Shami and Bumrah are experienced enough to take care of the rest, but Truppelmann’s late assault has given them something to play with.

In the last two games, Bumrah has relied excessively on the full deliveries, an aspect he’s so strong in. And he’s so good with his change of pace, which brings to an end Wiese’s anchoring knock. He had to go for the big one, but couldn’t connect it, gifting a catch to Rohit at mid-off.

Most catches taken by Indian fielders in men's T20Is:-

Just the 12 runs in the last three overs means that Namibia could probably end up in the vicinity of 125.

Barely half the stands are filled, but there’s enough India representation. The spinners today have given them plenty to cheer about: really, it wasn’t about anything special, they’ve just outclassed the Namibians on this surface. They look relatively more comfortable against quicks but have been guilty of playing the wrong line too often against the spinners.

Rohit now has most catches for India in T20Is.

Jadeja has his third!

Rohit Sharma takes a fine, fine catch, lunging forward to complete the dismissal. The tail has been exposed here, and the onus to take them to a decent total has, once again, fallen on Wiese.

Wiese playing the experienced hand here. He can be really damaging at the death, but also knows the need to build the innings until that point.

Ooh, lovely delivery there from Ashwin! Jut the flick of the index finger, pushing the ball and making it turn the other way, and Erasmus just tries to go at it. Get a thick edge and Pant does the rest.

With Wiese and Erasmus, two of their most resourceful batters around, Namibia can still look to crawl towards a respectable score. Wiese has the sixth-most runs in the T20 World Cup so far.

Update: Spinners tighten the web around

Ashwin is really changing his speed cleverly, making the Namibians think carefully about whether they should stay on the front foot or back. Chahar is back from the other side: really, they aren’t letting up in any way.

Another wicket for Ash! He’s really enjoying his time in the blue kit. Makes Loftie-Eaton cut hard at one, with Rohit positioned to take an easy catch.

It’s been such a joy watching him bowl in the blue kit.

The spinners have really pulled things towards India here. Jadeja does damage again. Out goes Baard after a really well made 21, but with the lengths, they are bowling, they are really making their batters sit sweep the ball from time to time.

Over 7, Namibia 35-2, Spinners squeeze out momentum

Rahul Chahar is bowling for the first time in this tournament. He’s been so good in the IPL in the last few years, which paved the way for his entry in this World Cup. Plenty of plays and misses for Namibia’s batters against spin so far, some turn on display too.

And, just like Scotland, it’s Jadeja who gives India the breakthrough. Makes it turn enough for Baard to miss it, with Pant doing the rest. Time for Gerhard Erasmus, the top-scorer in the WC qualifiers two years ago here.

Update: Breakthrough for India. Bumrah makes van Lingen throw his bat at a delivery on the off-stump, but he can only go as far as mid-off. It’s a pity though, as the openers were looking so good. Still, they have done well to quickly go to 33 runs with one powerplay over still to go.

He’s keeping a predominantly leg-side field, with fielders in the deep at midwicket and square leg. For the right-hander, he brings in Pandya from long-on to mid-on. Probably looking to get a leading edge off a slog sweep there.

Ooh, R Ashwin is in already. This is going to be interesting.

Over 3, Namibia 25-0, Openers continue to chip away with runs

Love the free-flowing approach from Namibia here. They really don’t have anything to lose, but it’s a great opportunity to make an impression among the big names of the game.

Bumrah from the other end. India would be aiming to polish off the top order quickly, much like the last game against Scotland. And just like that, Bumrah starts delivering punchy yorkers at the batters’ toes. Lingen drives one to the long-off fence, and finishes off the over with a pull to the midwicket fence.

Over 1, Namibia 5-0, Shami starts off with tight opening over

Some rapid pace from Shami first up, targeting the batters’ pads as he maintains a tight line on the stumps. Hardly anything given away.

India are wearing black armbands as a sign of respect for Tarak Sinha, the India domestic coach who passed away yesterday.

Baard and Lingen have taken their spots. India players take the knee before the first ball.

Mohammed Shami will open the bowling for India.

The anthems are done, and the teams are taking their places in the middle.

17:53, local time: The players are gathering around the boundary line. Not far from live action, are we.

The trophy is on display (pity both teams will be walking past it). We’re moments away from the anthems for both teams, and the flags of the two teams are slowly floating towards the playing area. 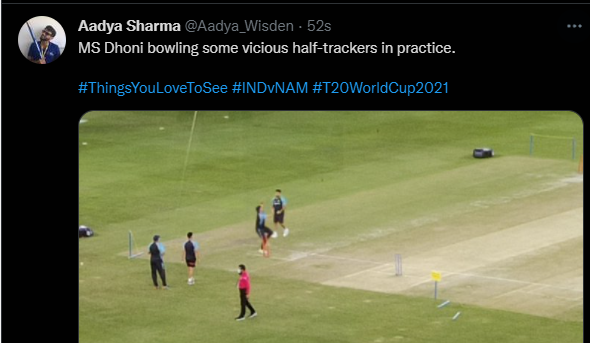 Finally, Chahar gets a game, replacing another spinner in the line-up. Chakravarthy continues to bowl on the practice surface along with the rest of the spinners, including some wily leg-spin from Ishan Kishan. Even Shardul Thakur is bowling some spin.

India win the toss and opt to field.

Final pre-match team huddle for this unit before the change of guard. 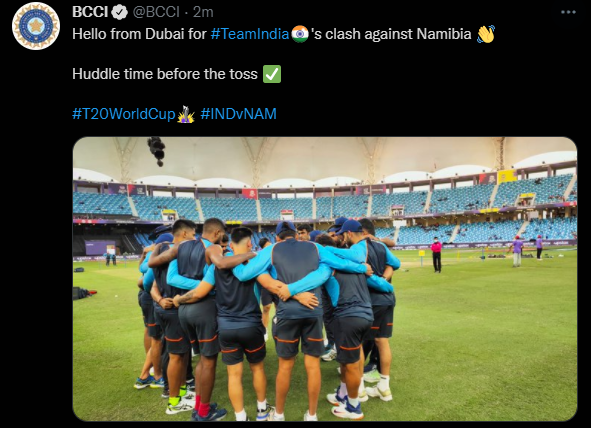 17.20 local time: We’re not far from the toss, and the preparations have intensified. Nothing much to play in the context of the tournament, but David Wiese tells Wisden India how big this game really is for the Namibia team.

Just over 20 minutes to go for the toss.

Elsewhere, Shastri is chatting with his support staff, MS Dhoni is playing some light football with young wicketkeepers Rishabh Pant and Ishan Kishan.

The players are practising on either side of the main strip: the bowlers are operating in unison, with the seamers slowly settling in with short run-ups. R Ashwin is bowling alongside Varun Chakravarthy and Rahul Chahar – what’s the combination India are trying today? Jadeja has also entered the arena. I’d say bring in Chahar, give him some game time.

Outgoing coach Ravi Shastri, in a short byte ahead of the game, passionately speaks about his time with the Indian team, heaps praise on Virat Kohli and proudly speaks about the character of the side. It’s been a memorable spell under Shastri, but the future could be an interesting one.

Both teams have arrived at the venue ahead of the clash. The stadium is a deserted landscape right now, and strong, sand-laden winds are blowing from one side of the structure. Outside, there are areas in Dubai where the winds are extremely strong.

With New Zealand winning their fixture against Afghanistan, India have been officially knocked out of the tournament. The match will end up being a dead-rubber for the two sides: India have four points at a net run rate of 1.619, while Namibia have two points at -1.851

Injury update: After Suryakumar Yadav’s return from his back spasm issue, there are no visible injury concerns for India. With the semi-final road over, they might look to try one of the players in the squad not tried out yet.

Injury update: Namibia have impressed one and all with their cricket, and will look to compete strongly against a formidable Indian team.

Sign up to bet365 to be entered into a draw for the chance to win a Wisden Hoodie, terms and conditions apply, more information here. 18+ begambleaware.org