With Ben Stokes reportedly set to miss the upcoming T20 World Cup, Ben Jones takes a look at what that could mean for England’s first-choice XI.

If media reports from the last few days are to be believed, England all-rounder Ben Stokes will be absent from the upcoming T20 World Cup. Chris Silverwood announces his 15-man squad (plus travelling reserves) for the tournament on Thursday, and all signs point to Stokes not being on the list for personal reasons.

On a human level, this is obviously a huge call for Stokes to make, and this has no doubt been a deeply difficult time for him. Athletes train their entire lives for these moments, for these tournaments, so to miss the chance to compete for any reason whatsoever is a significant thing to deal with. English cricket, and the cricketing world more broadly, wants to see a fit and firing Stokes back on the field as soon as possible, and as soon as he feels comfortable.

In the meantime however, there are significant cricketing knock-ons to his absence. How does England’s World Cup side adjust in the absence of Ben Stokes?

Well, first up – England are used to playing without Ben Stokes in their T20I side. They had to do without Stokes for their T20I series at the start of the summer, but also last summer as well – he hasn’t played a home T20I since July 2018. Globally, he’s played just 17 T20Is for England since that night in Kolkata. While that’s a consequence of rest and rotation, related to managing Stokes’ workload more than suggesting he’s not a nailed on first-pick, it does mean England have grown used to balancing sides without their premier all-rounder. 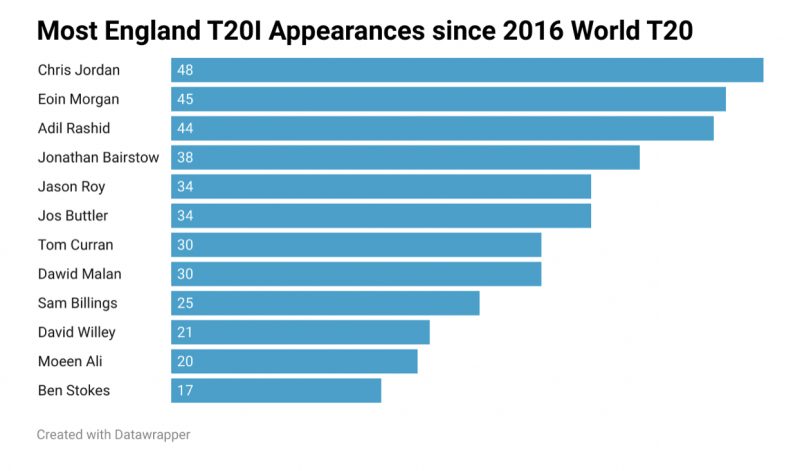 So, let’s clarify Stokes’ role in the England side when he is around. Around 2015-2017 (the early years of the Morgan-led white ball revolution) Stokes was used as a frontline bowler. He averaged 21 balls per match in 2015, 18 balls the following year, then 22 in 2017. Since then however, Stokes’ bowling has slipped down the pecking order. His average balls-per-match has fallen to just under 13, and he has bowled his full allocation just once in the last three years. Stokes’ bowling has remained important in allowing Moeen Ali to bowl less (the spin-bowling all-rounder has moved down the pecking order to become more of a match-up option, targeting left-handers) but he’s been the 5th/6th bowler. As a batsman, Stokes’ role has always been consistent, batting at No.5-6 in all but eight of his matches.

Despite his fame, charisma, and iconic performances in other formats, there is an argument that Stokes’ absence might actually make England a stronger T20 side. It’s an argument I made on this very website roughly 11 months ago, and roughly 12 hours before Stokes slammed a match-winning century for Rajasthan Royals against Mumbai Indians – so repeat it with caution. Broadly, it is simply the case that Stokes is not an elite T20 performer. His batting is effective, particularly after getting set (and he offers England the ‘dream team’ balance of three lefties and three righties in the top six) but as an individual he’s among the weakest members of the order. His bowling offers England a pace-on option through the middle, and a quick one at that, but he is not a particularly effective performer in statistical terms. While he is an enormous presence and quite obviously a man who brings his best performances when it ‘matters’, T20 is quite comfortably Stokes’ weakest format.

On top of this, squeezing Stokes in alongside Dawid Malan (two destructive left-handers, but ones who take a little while to get set) compromised England’s ultra-aggressive strategy and wasted their much-vaunted depth. England may well have come to realise their error in time for the World Cup – with Stokes available, they could have left Malan out of their first-choice XI, a harsh but ruthless call aided by the rise and rise of Liam Livingstone. As it happens, they won’t have to make that call. Malan can remain at No.3 with Livingstone slotting in down the order, as something of a like-for-like for Stokes.

It’s not a bad option at all, is it? Livingstone is arguably the most in-form white-ball hitter in the world, averaging 45 and scoring at 9.5rpo this year. He’s more than capable of replicating Stokes’ batting output, and on tired UAE pitches Livingstone’s spin variations should be capable of offering 2-3 overs per innings.

In a very straightforward sense, England are in a good position to replace Stokes. No shimmying the order about, no messing – Livingstone comes into their established first choice side in place of Stokes. Done. However, there is a slightly less obvious knock-on effect of this “like-for-like” replacement. And like everything in T20 cricket, it comes back to the identity of the No.7 batsman.

This summer, Livingstone averaged 10 balls per match as a bowler for England, including on a few rather spin-friendly surfaces which could have encouraged them to be used more regularly. While the relative merits of Stokes v Livingstone as T20 bowlers are debatable, the most important thing – how Eoin Morgan feels about them – appears to be clear. In his eyes, Livingstone is a downgrade on Stokes in terms of bowling.

In a team with Livingstone, Stokes and another all-rounder all in the top seven, that third all-rounder – either Moeen Ali, Sam Curran, or David Willey – would likely have been picked more with batting in mind. With three men acting as the ‘fifth’ bowler, their batting takes priority given they may only deliver one over (if any), and their bowling could be focused more obviously on match-ups within a game.

Stokes’ absence (and his effective replacement by Malan) changes this. It means that England could be drawn into playing the strongest bowler of those three (Willey), given that Livingstone’s bowling is not overly reliable and will have to be handled carefully. Perhaps more pertinently, it might mean they’re drawn into not playing the weakest bowler – Moeen – given the potential workload.

The alternative option would be to return to having three all-rounders in the side, regardless of Stokes’ absence, and embrace Livingstone’s “like-for-like” status. If England opted to leave out Jason Roy or Malan (the latter far more likely) then the possibility of batting Moeen and Livingstone in the middle order, plus Sam Curran at No.7, becomes an option. The spin-hitting of Moeen remains in the side, but without compromising the bowling to any huge degree.

Of course, this may be overthinking things. This World Cup is going to likely be very spin-friendly on tired pitches, and asking Livingstone and Moeen to get through four overs in Abu Dhabi and Dubai might not be the worst path to success. The announcement tomorrow morning will indicate England’s thoughts quite clearly – were they to not include another spinner alongside Rashid, Moeen and Livingstone, then you’d have to think they were comfortable with this more batting-friendly method. Willey is fighting Chris Woakes for a place even in the squad, you would think, and while Woakes is a fine cricketer, him over Willey basically takes away the ‘bowling-heavy’ option at No.7.

Ultimately, on a cricketing level, England can cope with the absence of Ben Stokes quite easily. A tweak to the balance here, a slight shift in pace/spin emphasis there, and the side works almost as well as previously. You would think though, that the real challenge for Morgan is replacing the more intangible, competitive qualities that Stokes brings to a side. In that respect, you’d do well to find a like-for-like replacement anywhere in the world.

"The experience of Azeem Rafiq at YCCC demanded no less"