There has been a striking shift at the top of the ICC World Test Championship Standings after the first India v England Test, with the visitors climbing to the No.1 spot after their victory in Chennai.

England’s clinical 227-run win at Chepauk, which hands them a lead of 1-0 in the four-match series, saw them pick up 30 WTC points to take their overall tally to 442. Their win percentage jumped from 68.7% to 70.25%, thus helping England edge over New Zealand, who have already qualified for the final with a PCT of 70%.

India, who were leading the WTC standings with 71.7% PCT before the start of the Test, have now slipped to the fourth place with a 68.25% win percentage. They have 430 points out of a possible 630.

Here are the updated ICC WTC standings after the first India v England Test in Chennai: 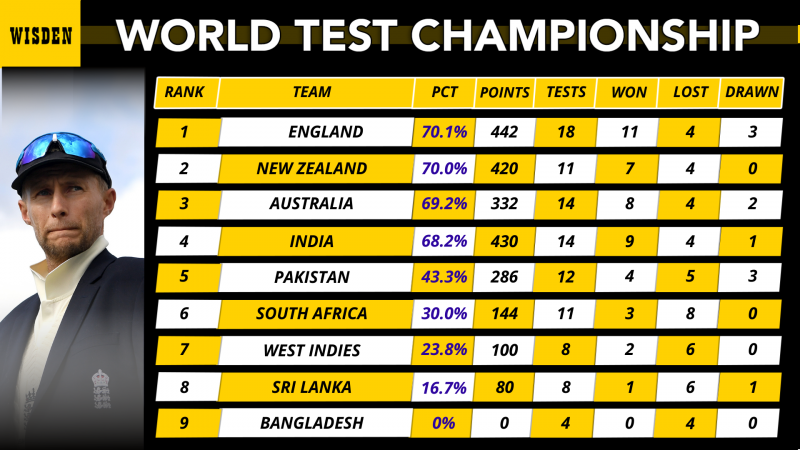 The result has blown open the qualification scenarios for the ICC World Test Championship final in July, with England, Australia and India still in the race.

New Zealand have already qualified for the final of the WTC. Here’s how the other finalist for the tournament will be determined:

If England win another Test in this series, India will be out of the race to the final. This is the last WTC 2021 series for both the sides.

The World Test Championship final will be played at Lord’s in June 2021. This is the first edition of the competition.