England’s ODI rebirth completed a full circle after a historic World Cup title win at Lord’s, with captain Eoin Morgan acknowledging that years of planning and hard work, and religiously sticking to their own cultivated ODI approach, had finally borne fruit.

“To me and to the team, and everybody who has been involved over the last four years, it means absolutely everything. The planning, the hard work, the dedication, the commitment and the little bit of luck today really did get us over the line,” Morgan told reporters at Lord’s, after a historic final, where both the 50-over score and Super Over score were tied, before the match was won by England on a superior boundary count.

“We’re only newcomers to this [New Zealand’s never-say-die ODI spirit], and we want to be as consistent as them come the next World Cup, with aspirations like that. But to get over the line reaffirms everything that we have done over the last four years and justifies it as well.”

It was a match settled on the slimmest of margins that gave England their first World Cup trophy. But despite the tension that ensued after the match had been brought down to a Super Over, a composed Morgan kept his side’s nerves under check, instilling a positive sense of belief.

“Yeah, I encouraged them to smile, laugh, enjoy because it was such a ridiculous situation, where there was quite a lot of pressure in that particular moment of the day, never mind the rest of it, and the fact it got to a Super Over and we had that to defend.

“It was a matter of trying to put smiles on the guys’ faces to release a bit of tension and the guys responded brilliantly to that.”

It was Ben Stokes who spearheaded England’s chase in a photo finish, top-scoring with 84, and leaving his side on par with New Zealand’s total of 241. Stokes’ fourth 75-plus score in the tournament further attested his worth as the lynchpin of the middle order, and England’s man for a crisis.

“To come through it is extraordinary. He’s almost superhuman,” Morgan said of his superstar allrounder. “He really carried the team and our batting line-up. I know Jos and his partnership was extraordinary, but to bat with the lower order the way he did, I thought was incredible.

“I think a lot of careers would have been ended after what happened in Calcutta [the venue of England’s loss to West Indies in the 2016 World T20 final]. Ben, on numerous occasions, has stood up individually and in a unit for us.” 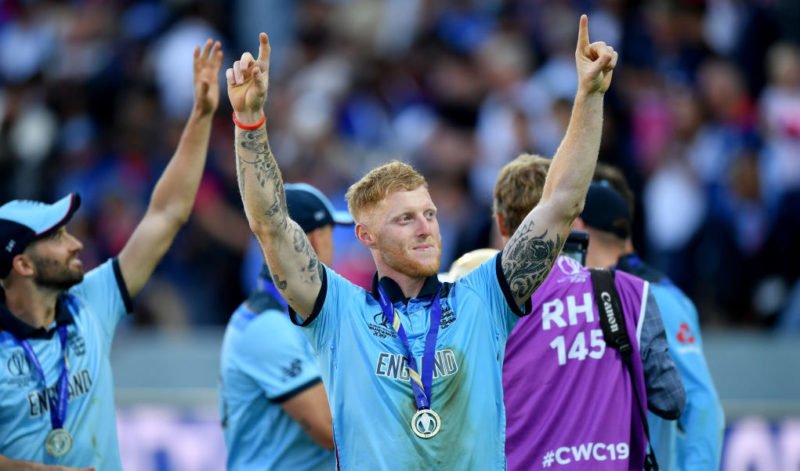 “He’s almost superhuman. He really carried the team and our batting line-up”

Known for their aggressive brand of white-ball cricket, England’s campaign stuttered in the middle after their 20-run loss to Sri Lanka, where they failed to chase down 233, playing out 47 overs before folding for 212. Morgan stated that digressing from their typical style of play hurt them in the middle, but they recovered right in time.

Their opponents for the final, New Zealand, ended up on the wrong side of a thriller, but Morgan had nothing but words of praise for Kane Williamson’s men, who finished runners up for the second time in a row.

“I’d like to commiserate Kane Williamson and his team. The fight they show is worth aspiring to, the example they set is commendable to all,” Morgan told Sky Sports after the match.

“The most admirable thing is the way they played their cricket,” Morgan later told reporters, “to consistently perform and compete against the very best on different stages throughout the year. They are the best, and they do it in a fashion that you’d have no qualms in turning around to your kid and saying, ‘Please idolise these guys, they are very admirable’. They are.”