Walter Read played a crucial role in Surrey’s revival in the 1880s and found form in 1892 to be named a Wisden Cricketer of the Year the following year.

Mr. Walter William Read, whose return to almost his best form was one of the most gratifying features of the cricket season of 1892, was born at Reigate on November 23, 1855, and thus belongs by the closest of all ties to the county for which he has done such brilliant work. He had not completed his eighteenth year when he first appeared in the Surrey eleven at the Oval, the match in which he made his debut being the fixture with Yorkshire in July 1873. Even thus early he had shown very promising form at Reigate, but no one could have foreseen what a remarkable career was commencing.

In the course of the last forty-odd years, many famous batsmen have played for the Surrey eleven, but, with all respect for the memory of William Caffyn, Jupp, Tom Humphrey, and others, we have no hesitation in assigning Walter Read the first place. Not even Jupp rendered the county such splendid service.

Walter Read did not take very long to show the exceptional ability he possessed, and an innings of 140 which he played in 1877 against Yorkshire at the Oval, when he and Jupp made over 200 for the first wicket, firmly secured him his place among the leading batsmen of his time. Scholastic work at Reigate, however, limited his appearances for Surrey for some years to the latter part of the season, and it was not until an official post was found for him at the Oval that he was able to devote the entire summer to the game.

With the fuller opportunities that then fell to his share, he at once became the mainstay of the Surrey team. It was in the season of 1881 that he was first available for the county in all matches, and since that time he has very rarely been absent from the eleven. 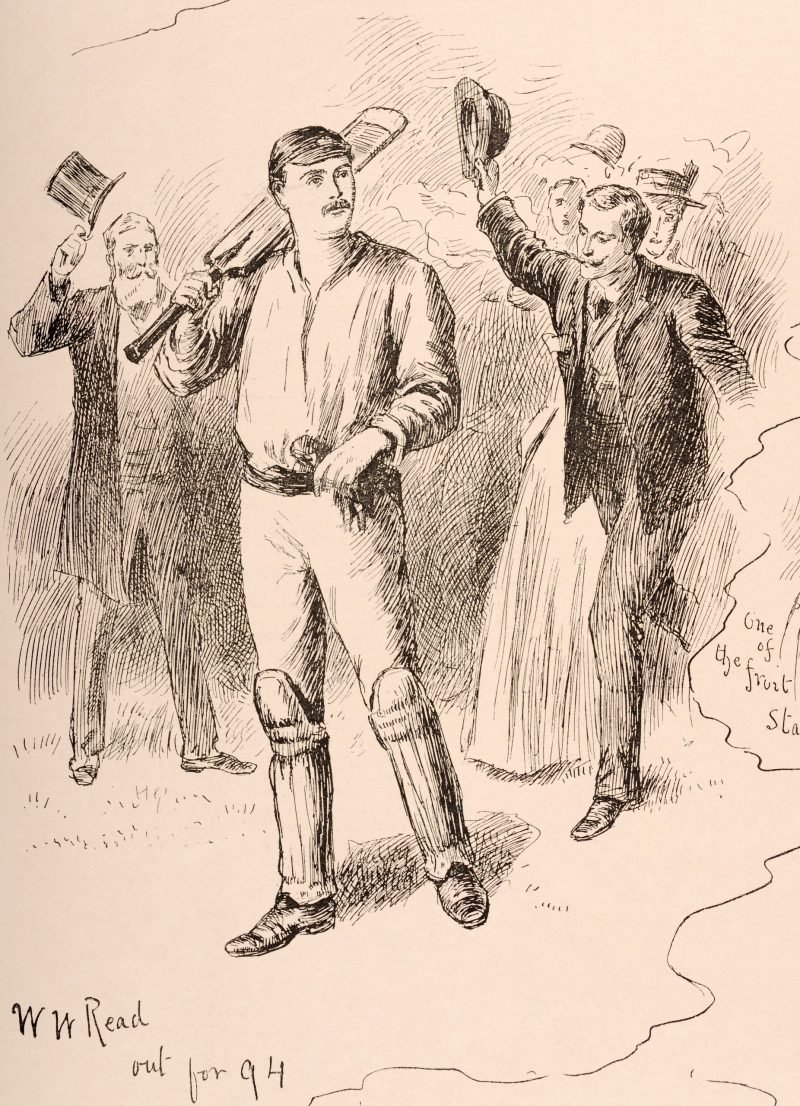 The revival of Surrey cricket began in the season of 1883, and except perhaps Lohmann, no one has played a more important part than Walter Read in bringing the county back to its old position. Several pages of the Wisden Almanack could easily be filled with a record of his doings for the Surrey eleven, but we must be content here to recall two of his more remarkable achievements. The highest innings he has ever played in a first-class match was 338 against Oxford University at the Oval in June 1888. In 1887, when he obtained in first-class cricket 1,615 runs with an average of 47.17, he made a score of over 200 in two successive matches – 247 against Lancashire at Old Trafford, and 244 not out against Cambridge University at the Oval.

In 1892, he played four three-figure innings for Surrey, his best score being 196 not out against Sussex at the Oval. If we were asked to say which was the finest display of batting we ever saw from Walter Read, we should at once name his 117 for England against Australia at the Oval in 1884. On that occasion he was number ten on the batting order, and the way in which he punished Spofforth, Palmer, Giffen, and Boyle can never be forgotten by anyone who was so fortunate as to be present. The Surrey cricketer often bowls lobs with success; can keep wicket on occasions; and is a capital field at point – not an EM Grace, but still very safe and dependable.