In the early 1970s, Tony Greig emerged as an outstanding all-rounder for England with a capacity to make game-changing contributions. He was a Wisden Cricketer of the Year in 1975.

Standing nearly 6ft 8in, his head capped by blond hair that gleams like a golden helmet in the sun, Tony Greig, on all counts, possesses what Noël Coward described simply as star quality. Here is the Nordic superman in the flesh but although he has the fiercely competitive quality on the field, Greig is a friendly, gentle soul off it. His impact upon the English cricket scene matched his striking physical presence and it is astonishing in the light of all that has followed that his debut was as recent as May 1967.

When he walked out to bat for Sussex at Hove for the first time the scoreboard showed 34 for three and waiting to give him his baptism of fire was the formidable Lancashire trio, Brian Statham, Ken Higgs and Peter Lever.

On his own admission he forgot all about the first principles of batting; he did not size up the conditions, he did not play himself in and have a good look at the ball, he did not treat the bowlers with initial respect, he did not wait to see whether the delivery was suitable to drive having made up his mind to hit out before the ball left the bowler’s hand, he took no care over his shots. Head up, feet in the wrong position, no idea of the correct line. “You name the mistake, I made it.”

All terribly reprehensible, but no one could take from this unknown 20-year-old South African the fact that he made 156 in ten minutes under four hours and Sussex recovered to a total of 324. Three days later at Fenner’s he was gated first ball by the Cambridge off spinner, David Acfield. When he came in Alan Oakman demanded 22 shillings and handed him in exchange a Primary Club tie dotted liberally with shattered stumps and flying bails. “It didn’t take me long to join the first-ballers club” says a rueful Greig.

Against Lancashire in his very first game Greig showed his potential as a future international batsman around five or six in the order. When Gloucestershire came to Hove later that same season he showed that here was something even more valuable, a genuine all-rounder who could well fill the gap left by Trevor Bailey’s retirement. Greig rolled over Gloucestershire with fast-medium seam bowling that brought him figures of eight for 25.

He was elected Best Young Cricketer of the Year by the Cricket Writers’ Club in 1967, the year Sussex capped him. He transferred from Border to Eastern Province in 1970/71 and Sussex made him their captain in 1973. Between 1972 and 1973 he appeared in no fewer than 19 Tests. He played in three matches against the Rest of the World for England in 1970 and five for the Rest of the World in Australia in 1971/72.

He has toured the West Indies, India, Pakistan and Sri Lanka. Greig has made 1,000 runs in a season six times. He did the hat-trick for Eastern Province against Natal at Port Elizabeth in 1971/72 and also took three wickets in four balls against Hampshire at Hove in 1967. He has been named man of the match four times in Gillette Cup ties and at the Saffrons, Eastbourne in 1966 he made a century in each innings for LC Steven’s XI against Cambridge University although this fixture was not regarded as first class. His maiden century against Australia at Brisbane in the closing weeks of last year was the solitary cause for rejoicing in English hearts in a start to the series which was otherwise for many weeks a continuing catalogue of unrelieved disaster.

Although his accent conjures up thought associations like Table Mountain, the Transvaal and Sari Marais, Greig is proud of his British stock. His father is a Scot from Edinburgh, the son of a family businessman with shops in towns like Falkirk and Bathgate. Dad was more interested in adventure than baubles however as his life pattern proclaims: he emigrated to South Africa where he married, and worked at the vastly differing callings of fighter pilot, insurance man and sports writer. 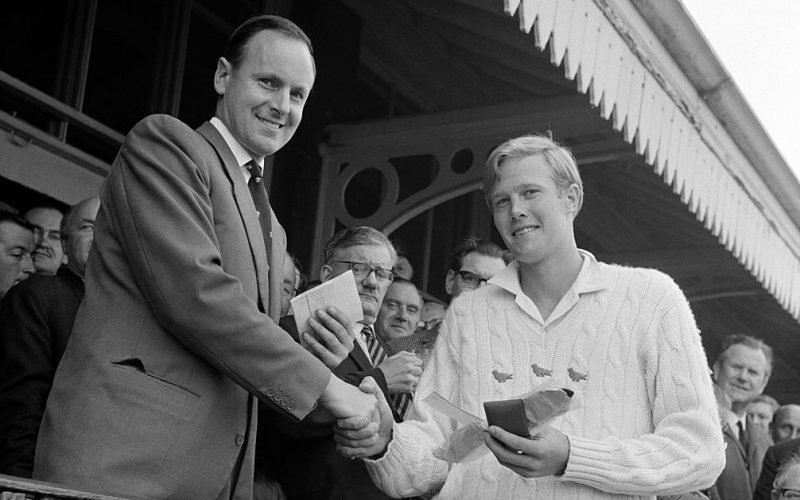 Tony Greig is presented with the Man of the Match award by Peter May after Sussex’s Gillette Cup fixture against Derbyshire at Hove, circa 1968

Anthony William Greig was born on October 6, 1946 at Queenstown in the Eastern Cape in Border Province. He was educated at Queen’s College, Cape Town, and the choice of this particular seat of South African learning was to decide his cricket destiny. Queen’s College has always looked to Sussex to supply their coaches and during Tony Grieg’s time there, Jack Oakes, Alan Oakman, Ian Thomson, Ron Bell, Richard Langridge and Mike Buss all came out for a winter of work in the sunshine.

All returned to the South Coast and sang the praises of a boy called Greig. Sussex decided, naturally, that they could not all be wrong and when Border Province blooded him in the Currie Cup at the age of 19, the club offered him a trial. His father had to decide whether his son should go on to University to work for his B.A. or accept the Sussex offer. “He used to slam into me for not reading enough, for being generally immature. He would look at me sometimes and say ‘Boy, when I was your age I was fighting a war’, but in the end he grinned and said: ‘Go over to England for one year – one year mind – and see what you can do’”.

After the taste of that first innings against Lancashire, Tony wrote a short note to his father which said Goodbye to that University career. Quixotic, like that maiden century? Undoubtedly, but again, handsome is as handsome does, for over 30 appearances for England crammed into four years still all criticism.

Greig gave himself six years to reach Test standard. He made it in something less than four

Tony has never set much store on security since at the age of seven he had an experience which reads like something from the pages of an Alistair MacLean novel. He was bathing with his mother off the coast near East London when a shark seized his mother by the leg and started to drag her out to sea. In a frenzy of fear Mrs Greig struck at the shark’s snout with her hands and, incredibly, it not only released her but turned and swam away. Mother and son managed to get ashore but only the use of a special serum flown into East London saved Mrs. Greig’s leg from amputation. She will bear the scars of that terrible moment all her life and she has never been near the sea again.

It took Tony years to fight down his own aversion to salt water. He had to dedicate himself to something to help him forget and it turned out to be cricket for which we must not fail to pay tribute to Tackies, the Greigs’ young Bantu gardener. Tackies, so called by the family from the big white plimsolls he invariably wore, had no interest in batting but he loved bowling – a Boycott in reverse, as it were.

“He was fast, he was tireless and he could bowl straight. He used to come at me from one end of our back lawn with a variety of cricket balls, tennis balls, hard rubber balls – anything that was round and approximately the right size. I stood at the other end of the lawn with my bat defending a dustbin. The last I heard of Tackies he was working in a goldmine near Johannesburg. I wonder if he’s found someone else to bowl at?”

Related Story: Derek Underwood on when the public helped England to an Ashes win

Greig gave himself six years to reach Test standard. He made it in something less than four. He loves England but is loyal to South Africa. “Just say I feel I have two countries and regard myself as lucky, and leave it at that.” On batting, he says, “I learned on hard wickets in good nets and when the ball is pitched up I like to hit it as hard as I can.” On fielding – “I’ve got to be in the slips or short leg or somewhere I know the ball is likely to come frequently and give me a chance of a catch. I’d die of boredom stuck down at third man.”

Of his bowling it could be said that actions speak louder than words. Having proved his capacity as a seamer he has become obsessed with bowling slower off a short run using the natural turn of the wrist. His lack of success in the English season of 1974 in this new role calls to mind one of the aphorisms of Hippocrates – The life so short, the craft so long in mastering. Yet, with that said, not even the severest critic of his new style bowling can take from him those 13 wickets at Port-of-Spain in the spring which, against all expectations, allowed England to save the series against the West Indies at the death.

The great thing about him is his approach to the game and his unfailing ability to make a valuable contribution, one way or another, in nearly every match he plays in. It is a quality which by the time he leaves the first-class game may have admitted him to the highest company of the true all-rounders of history.

Tony Greig took over the England captaincy in 1975 and proved an inspirational leader. Two years later he became the chief recruiter for Kerry Packer’s World Series Cricket. In 58 Tests, he scored 3,599 runs at 40.43 and took 141 wickets at 32.20