Brian Statham went from rookie to mainstay of the Lancashire attack in a remarkably short time. In 1955, he was one of Wisden’s Five Cricketers of the Year.

Few cricketers have gained as much experience at the age of 24 as John Brian Statham, the England and Lancashire fast bowler, who already has participated in four MCC tours, two to Australia and one each to India and West Indies. Towards the close of the 1949 season one of Lancashire’s chief worries was to find a successor to R Pollard, whose standard no fast bowler on the Old Trafford staff then approached. Yet midway through 1950 the problem was solved when Statham, an almost complete stranger, came straight from National Service in the RAF.

Born at Denton, near Manchester, on June 17, 1930, and a product of Denton West club, Statham played his early cricket with the Whitworth Street team in Manchester Schools matches. In those days he did little to indicate that he was an England bowler of the future. His achievements with Denton West created only local interest and, when he joined the RAF, his name was unknown outside a small circle of followers of the North-Western League. Throughout his 18 months’ service, Statham was stationed at Stafford from whence he was able to journey home for weekend games with his local club.

Eventually Statham moved up the League scale, joining Stockport in the Central Lancashire League. Here he faced some notable professional cricketers and, although accomplishing nothing remarkable in six matches, showed himself a bowler worth encouraging. Yet nobody drew the attention of Lancashire to this slip of a youngster who was gradually improving his length, swing and direction. His pace then was no more than ordinary, but unit cricket and keenness to progress attracted the notice of his sports NCO, Corporal Lazarus, a Londoner, who wrote to MCC asking if they had a vacancy for a promising youngster who shortly would be returning to civilian life.

Back came the reply that Statham would be well advised to approach Lancashire who, on hearing from him, offered him a trial which led to his joining their ground staff late in May 1950. After his service duties Statham entered first-class cricket without real coaching. True, various league players gave him advice, but he was a natural bowler. Cricket obviously was in his blood, as three of his brothers were good enough to appear in local leagues, but that was the extent of his family’s sporting background.

Within two weeks of reporting to Harry Makepeace, the Lancashire coach, Statham received his chance in county cricket when making his debut against Kent at Manchester. On the first day, he celebrated his 20th birthday. At that stage he was a youngster who carried his flannels in a canvas bag and his boots in a brown paper parcel. Inside a few weeks he made secure his county place, but he was not without adverse critics. His action did not please the purists, who considered it lacked rhythm. Even so wickets constantly fell to him and one devastating spell with the new ball on a well-marled pitch at Bath gave him five Somerset wickets for eleven runs. 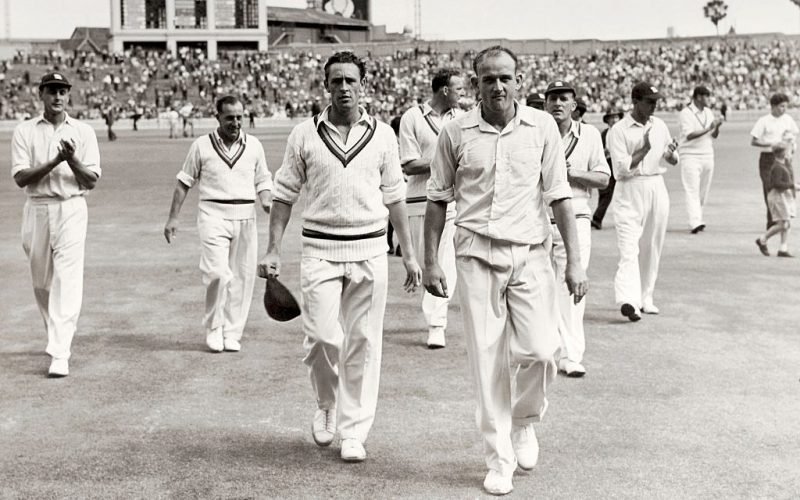 Brian Statham (left) and Frank Tyson lead the England team off the pitch after their win in Sydney, circa December 1954/55

In his first clash with Yorkshire, Statham fell on a greasy pitch while attempting to gain extra pace. He regained his feet and later in the same over hit Lowson’s middle stump with a beautiful ball which moved slightly off the seam. That was in August. Five months later, Statham flew to Australia with his Lancashire colleague, Tattersall, to reinforce the injury-stricken MCC led by F.R. Brown. Brown did not require Statham for either of the two remaining Tests in Australia, but Statham was picked for the First Test against New Zealand in March 1951. Since then Statham has always been worthy of consideration by the selectors, but with Bailey, Trueman and A.V. Bedser claiming attention, he has had to fight for his place.

Statham established himself on the unfriendly pitches of the West Indies in the early months of 1954. He headed the Test averages with 16 wickets at 28.75 runs apiece and his opening spell at Georgetown, in which he dismissed Worrell, Stollmeyer and Walcott for ten runs, played a leading part in England’s Third Test victory by nine wickets.

To see Statham mark out his 17-pace run, add a hop, skip and jump, and tense those now-powerful shoulders is to recognise a cricketer who has succeeded by being natural and accepting triumph or failure with equanimity. Although a right-arm bowler, Statham bats left-handed and he can be useful in a crisis. He is a magnificent outfielder, a very sure catcher and possesses a long, fast, accurate throw. In 1955 he is a self-assured young man, but ever ready to listen and learn. His action continues to cause discussion, but he always attacks the stumps and he should remain a personality in English cricket for many more years.

The prediction at the end of this piece proved spot on. Brian Statham became one of England’s greatest fast bowlers and a legend at Lancashire. In 70 Tests, he took 252 wickets at 24.84, while in all first-class matches he had 2,260 at 16.37.