A young and fiery Allan Donald excelled for Warwickshire in the 1991 season, thereby showing early signs of a truly great fast bowler. He was named a Wisden Cricketer of the Year in 1992.

The time was October 1986, the place Bloemfontein, the occasion a pre-season celebratory dinner, given by their supporters, for the Orange Free State team. The players, a set of enthusiastic youngsters, were headed by Corrie van Zyl, then the best young fast bowler in South Africa. But Roger Prideaux, the former England, Sussex and Northamptonshire batsman, drew my attention to someone else. “That’s the bowler I would take into county cricket,” he said. “He’s nearly twenty, and he has as much genuine potential to be fast as any bowler I’ve seen.”

That bowler was ALLAN ANTHONY DONALD, born on October 20, 1966 in Bloemfontein, where he was educated at the Technical High School and went on to be selected for the South African Schools XI in 1984, as twelfth man, and 1985. He made his debut for Orange Free State in 1985/86, against Transvaal at the Wanderers, having Jimmy Cook caught behind early on, and since then he has become one of the leading fast bowlers in world cricket. Arguably he is one of only two white bowlers, Australia’s Craig McDermott being the other, who could have forced his way into a full-strength West Indies side in 1991.

Figures can be misleading or unrepresentative, but Donald’s, compared with those of David Lawrence and Devon Malcolm to the end of the 1991 season, provide a telling story. A comparison with Curtly Ambrose’s record is similarly revealing.

The speed of Donald’s advance, even among a breed of cricketer which reaches its peak sooner than most, is outstanding, particularly as he has had to overcome two major problems. The occasional advantage of bowling fast all year round is heavily outweighed by the strain imposed on his body, and Donald has received regular advice from both Warwickshire and Orange Free State about the need to conserve his talent. But while that is a problem, common to most overseas bowlers who ply their trade in England, a bigger one for Donald was fighting his way through the maze of Warwickshire’s contractual obligations to cricketers from abroad.

From 1987 to 1989, he shared the overseas slot at Edgbaston with the West Indian fast bowler, Tony Merrick, and in the first two seasons he managed only eighteen first-class games to Merrick’s 30. Such was his glittering promise, however, that in 1989 he headed the national averages with 86 wickets at 16.25 apiece and played an important part in Warwickshire’s success in the NatWest Bank Trophy. It came as no surprise when Warwickshire released Merrick at the end of the summer, and it appeared that all the arguments concerning overseas players had come to an end. 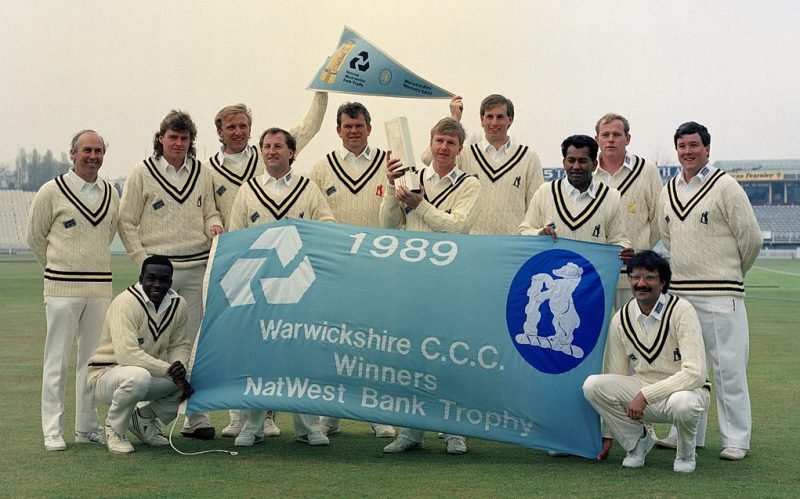 The Warwickshire team with the Natwest Trophy in September 1989. Allan Donald is standing third from left at the back

But not so. The county signed Tom Moody for 1990, with the intention of playing him in the Sunday League so that Donald would be spared the strain sometimes brought about by bowling off a shortened run-up. In the event, what happened helped to precipitate a crisis within the club which came close to ending Donald’s career at Edgbaston. Injury, followed by loss of form and confidence, coincided with a magnificent series of Championship innings from Moody and led to Donald being resigned to the fact that the big Australian would be preferred to him for 1991. Happily, the Warwickshire committee decided in the South African’s favour, not only on cricketing grounds but also on the ethical ones of honoring a long-term contract.

Last summer Donald repaid Warwickshire’s faith in him by bowling them to the verge of the County Championship title, taking 83 wickets at 19.68 to finish behind Waqar Younis in the national first-class averages. Until the last three weeks of the season, his captain, Andy Lloyd, rigidly restricted him to spells of no more than five or six overs, even when he was taking wickets. But Donald showed great reserves of stamina and courage by bowling unchanged for twenty overs in the final home game against Northamptonshire, despite a back injury, and his six for 69 in the second innings to win that game, and another six in the first innings at Taunton, took to eight his five-wicket returns in 1991. Only Waqar Younis exceeded that figure, and twice Donald finished with ten wickets in a match.

His physical attributes are there for all to see. A magnificent natural athlete, he has a not over-long run-up, which accelerates him into a high, balanced, slightly open action. Despite this openness, he still has that priceless ability to run the ball away from the right-handed batsman, both in the air and off the pitch. He bowls a fuller length than most fast men – a deliberate change of method in 1991 – which is why some 70 per cent of his wickets were either bowled, lbw or caught at the wicket. Occasional losses of rhythm, with their subsequent diminution of effectiveness, occurred less frequently last summer, and Donald’s ability to cope with the pressure of international cricket brought him instant success in South Africa’s historic week in India in November.

Bowlers capable of genuine speed rarely sustain fitness and form for more than a decade, and Donald is now halfway through that period. The best is yet to come; the question is, for how long? His physique and action should carry him through another five years – always provided that his commitments to Warwickshire, Orange Free State and now South Africa are treated sensibly by all parties.

By the turn of the Millennium, Allan Donald had established himself as one of the finest fast-bowlers to have graced the game and continued to play for South Africa till the 2003 World Cup. He finished with 602 international wickets.