Zaheer Abbas announced his arrival as an international star with a sensational double century at Edgbaston on Pakistan’s 1971 tour of England, becoming a Wisden Cricketer of the Year the following season.

In its brief history the Muslim state of Pakistan has produced many cricketers of the highest class, including batsmen of the ability of the Mohammad brothers, Hanif and Mushtaq, and the exciting Asif Iqbal. The name of Zaheer Abbas is now added to that distinguished company.

When Zaheer arrived in England with Intikhab Alam’s party it is fair to say that he was barely known outside his native country. Perhaps it was to his advantage that he was not burdened with an inflated reputation. Yet within weeks he was accepted as a world-class batsman of classical style, with a rich variety of strokes, including a perfect cover drive, and of an imperturbable temperament. Few overseas players on their maiden tour of England have mastered conditions and bowlers alike with such complete efficiency.

He announced his talent with an impressive century in his opening innings at Worcester and, though he was dismissed first ball in the crucial last Test at Headingley, he maintained a high standard.

The Everest of his brilliant tour was scaled in only his second Test, and first against England, with a score of 274 at Edgbaston, an incredible innings only four short of Denis Compton’s record for the two countries set up at Trent Bridge, Nottingham, in 1954. Such was Zaheer’s control that it seemed at one stage that any of the world’s batting records might disappear.

Success followed success for the quiet, bespectacled, slim Zaheer, who is inclined to allow his achievements to do his talking for him. He was the first in the season to reach 1,000 runs, which, considering the wealth of experienced talent from all countries now playing in county cricket, was a considerable feat in itself. It was not surprising that he became the prized target of several counties. His choice fell on Gloucestershire.

Zaheer was a little surprised at the extent of his success. “I went to England with the intention of doing well, or giving up the game to start a new career,” he said, “Now I shall stay in county cricket for as long as I can play well, and for as long as I am wanted. My ambition is to serve Pakistan in the best way I can, and it seems as if cricket gives me that opportunity. I do not set my heart on breaking records, but if records should come my way all the better.”

Syed Zaheer Abbas was born on July 24, 1947, at Sialkot, a town 80 miles from Lahore, famous for its sports goods industry. His father, Syed Ghulam Shabbir, a Government official engaged in plant protection, was an athlete. Of six younger brothers, four are cricketers and two hockey players, and he also has a sister. But for all his ability, swiftly recognised at school level at Karachi, Zaheer’s path to the top was erratic.

“I do not set my heart on breaking records, but if records should come my way all the better”

After Government School at Karachi he went to Islamia College, Karachi, and he believes he must have scored 50 centuries for his college, Karachi University and Park Crescent, one of the leading clubs in the Karachi League. At school and college, he captained his sides.

Many of Pakistan’s top players sooner or later gravitate to Pakistan International Airways and Zaheer, combining cricket with a position in the sales department, was no exception. He soon made an impression in the various competitions. There was a maiden century, extending to 197 for Karachi against East Pakistan in the Quaid-e-Azam Trophy. His average for that tournament in 1967 was 93.00. 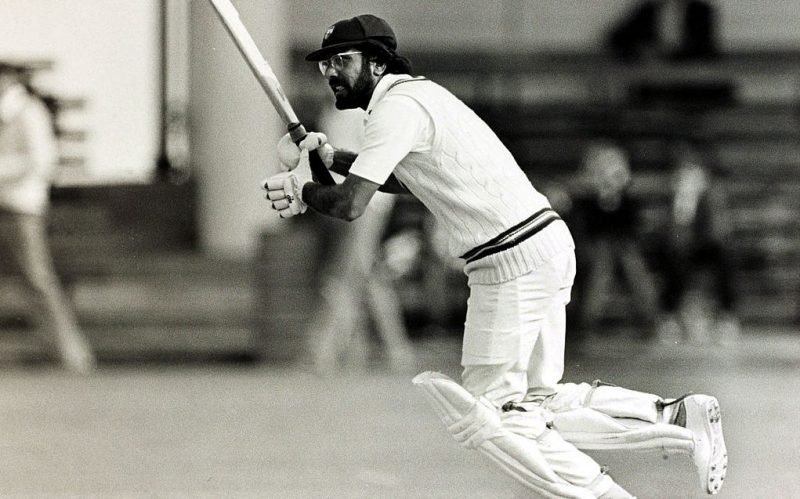 Zaheer Abbas in action for Gloucestershire, circa 1980

For PIA he scored three centuries in 1967, and he reached the purple with five in six matches, including 202 off Karachi A, captained by Intikhab, in 1970/71. His position as a leading batsman for the tour of England was sensationally confirmed and left his captain under no doubt that he had outstanding gifts.

Before playing against England his one Test was against New Zealand at Karachi, 1969. In a low-scoring match his contributions were a modest 12 and 27. He then seems to have faded from favour. There was a brief tour of Ireland with PIA in 1969 when his scores were 62, 67 and 44, and he was included in the Under-25 side which was to have visited England in 1970. The arrangements were cancelled amid the confusion of the South African trouble. 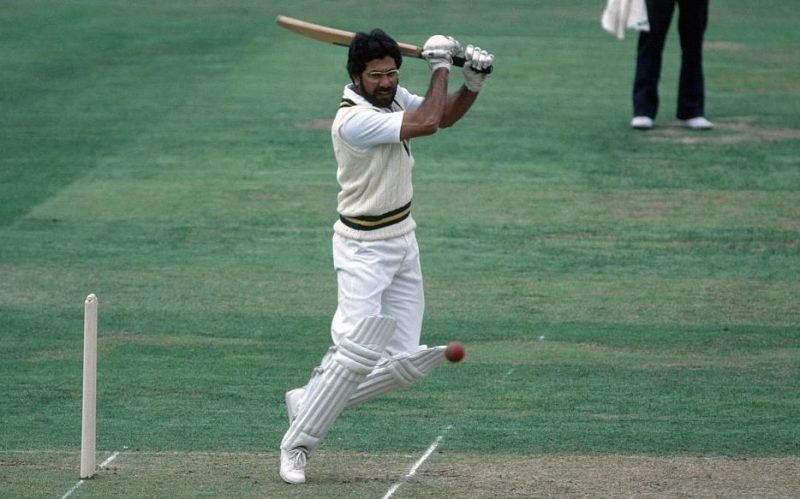 Zaheer was due to play in a match against Cowdrey’s MCC team in Pakistan, but the game was ruined by rain and he was denied an opportunity to remind the selectors of his prowess. Apparently, he was not considered for the three Test matches. Among his achievements was the winning of the Karachi Gymkhana single-wicket competition in the face of stiff opposition, but he did not really arrive until his five centuries equalled Hanif’s record for a domestic season.

“I thought I might have to change my technique in England” confessed Zaheer. “But it was not so. After what I had been told I anticipated much more movement of the ball. But I soon found my normal methods were right. I have not based my technique on any other Pakistani batsman but I have always made a point of giving the game a lot of thought. I never miss a daily net practice at home.”

“I needed to put my head down at the start, and make sure Pakistan did not lose another wicket”

Zaheer is graceful and lithe of movement, unusually modest and unashamedly patriotic. There is a genuine and proud wish to do his utmost for the glory of Pakistan. His famous innings at Edgbaston exceeded his wildest hopes. He recalls: “I needed to put my head down at the start, and make sure Pakistan did not lose another wicket. The pitch was good and I felt I could master the bowling. Once I was set I had no other thought but to carry on. After the first 50 I went to the next 50 and so on. When I passed 250 I put my sights on 300, and I would have gone beyond that if I had not got out.”

The final words emerge as if in apology. An England attack, short only of John Snow, which had defeated Australia was dismissed by Zaheer as if he was engaged in a routine exercise. His timing and remarkable concentration produced an hourly scoring rate for nine hours averaging 30. Not once did he waver in skill and purpose.

Boycott, Barrington, Sobers and Richards, accustomed to the rigid discipline demanded to play a long innings at international level, would have been well satisfied with such a performance. For a virtual newcomer to Test cricket to display impeccable judgment and skill and not to break concentration over nine hours was little short of astounding.

Zaheer, a fine slip fielder and useful change bowler, may never reach 274 in a Test again, but the quality of his batsmanship is beyond dispute. He added much to the lustre of England’s summer of 1971.

Zaheer Abbas went on to become one of Pakistan’s greatest batsmen, scoring 5,062 runs at 44.79 in 78 matches. He scored 108 first-class hundreds