It was front-page news when MCC finally decided to admit women members in 1998. But even now the new cohort can find visiting Lord’s a daunting experience. In the 2020 Wisden, Emma John recalled her first summer as a member.

Your first mistake is buying beer at the Long Room bar during a T20 game. Turns out there’s an ancient statute – or perhaps a curse, you’re still not quite clear – that means your drinks can never leave the room, much like the Holy Grail in Indiana Jones and the Last Crusade. So you down them, and follow directions to the Bowlers’ Bar. Where you buy more beers, then discover you can’t take those outside either. So you down them, and walk shakily back to your seat. You aren’t sure how many overs you’ve missed, but in the meantime the numbers on the scorecard have turned to squiggles, and you’ve sort of forgotten who’s playing. One of them’s Middlesex, right?

Wait, that isn’t your first mistake. Your first mistake was showing up an hour before the start of play. You thought that left plenty of time to get a seat, but the Pavilion benches had been entirely papered over: Telegraphs, Timeses, spread proprietorially from the front row to the upper balcony. The sole remaining spot was next to a stinky bin and behind a pillar that obscured the slip cordon. You sat down on the bench. It was like a packing crate. You should have brought a cushion. Rookie error #3.

In 1998, seized by a rare fit of liberality, Marylebone Cricket Club finally opened their doors to women. I was one of the first to put my name down and, last year, one of the first to graduate from the notoriously long waiting list. There were 134 women elected to full membership in 2019; we were the largest female intake the club had seen. Although, to offer perspective, there are currently 18,000 full members of MCC.

Some see membership as a cynical way to guarantee a seat for every day of the Lord’s Tests. Well, let’s not pretend. Unfettered access to the ground, its historic Pavilion, and its exclusive members-and-friends stands, at the ridiculously good value of £600 per annum, is precisely what makes a 20-year wait worthwhile. But there are other privileges: a say in the future of the most prestigious cricket venue in the world; use of facilities that include a peerless indoor school and a real-tennis court; plus, of course, an excuse to wear those eye-watering club colours.

My red pass lands on my doormat in March, embossed in gold, and stiff as a brigadier’s upper lip. Twenty years is half my lifetime. When you’ve been waiting that long for something, it doesn’t occur that you may not be ready.

You’ve been in the Pavilion before – it’s not new to you. Or is it? So many rooms you’re now allowed into, but are too nervous to enter; staircases you can’t tell apart; corridors that don’t join up; unmarked doors that usher you into a display of vintage tour blazers; a parlour of white-linened tables that smells like school, where men in grey suits and navy ties sit alone, chewing carefully on bacon rolls. Even the ground you know so well looks alien from this angle. Of course it does – you can’t see Victorian brick.

You’ve never experienced the Long Room like this, either. Never walked in during a game, seen the rows of empty stools, wondered if you’re brave enough to sit on one. Decided you’re not. Hovered, instead, in no man’s land, holding your breath, hoping a steward won’t demand you move. An echo amplifies the softest shuffle, turns a hallway into a cathedral. Maybe that’s why no one speaks. Portraits of cricketing grandees stare down. They should put candles in front of them. Send up prayers to St Grace.

There’s a shout from the middle, a distant cheer, a smatter of applause. You see the batsman heading in, and you’re terrified of being in the way, desperate to get out of this room, this room you were once so eager to conquer. So you spin round, straight into his replacement.

There is solidarity in being a minority. It was at my second game that I met Olivia, whom I sat beside, I’ll admit, entirely on the basis of gender. She described her first visit as “horrendous” – the horror of arriving at a party where you know nobody. Since then, some of the female members have taken matters into their own hands and created a Facebook group. If you are planning to be at a game, you can post a message and find out who else is going. A digital response to the old boys’ network.

I joined immediately. I also discovered the library. It wasn’t as grand as I’d imagined – just a small room next to the museum, modestly furnished, walls stacked floor to ceiling with what appeared to be every cricket book ever published. Unthreatening and, most of the time, uninhabited. Not as sociable, perhaps, as joining the bridge or chess or backgammon societies, whose existence I learned of in the club newsletter. But it made me feel, for the first time, at home.

Thursday. First day of the Ashes Test. OK, it’s not, not strictly – the first day was a Wednesday washout – but it feels like it. Bright green outfield, bright blue sky. Pat Cummins reaches his mark, and every conversation in the ground pauses. Nothing is as quiet as the silence of 30,000 people.

Four and a half hours you’ve been here. By 6.30am, the line of egg-and-bacon ties was nearing the end of St John’s Wood Road, about to turn the corner towards the hospital. A thermos of coffee and two slices of toast, kept warm in tin foil, saw you through until the gates opened. No wonder members are caught napping in the afternoon session. Queuing is brutal.

But the cricket is electric. And next to you is Robbie, a nice bloke you knew at college who has offered to help you acclimatise, teach you the seat-bagging etiquette, stop you repeating the beer mistake. He played for the club before he became a member, and even he found the place intimidating. It’s easy to assume everyone is old, or posh, or not your kind of person, says Robbie. But you find your people. Then you’re friends until you die.

You fall in with his rituals, which are comfortingly alcoholic. Only diehards want to sit on those bum-numbing Pavilion benches, so you’re on the plushy tip-up seats in the new Warner Stand. You’re heading to the bar when a couple of chaps – maybe ten years older than you, maybe 20 – summon you over as if you’re their waitress. They’ve spotted the MCC colours on your hat.

“Can I just say?” The dominant male is speaking. “Can I just say? I voted against women the first time round. But the second time, I voted for you.” There’s a pause, which you sense you’re supposed to fill with gratitude. Instead you ask what changed his mind. He smirks at his friend. “Good-looking women like you!”

Earlier this summer, she spoke to @Taha_Wisden about becoming the MCC’s first female president and breaking the glass ceiling. https://t.co/PkOyNJGPXf

Several of our Facebook group were playing members, which meant they had bypassed the epic waiting list and been given the freedom of Lord’s years ago. In the early days, some of these veterans had been accosted by strangers and asked: “What are you doing here?” Being patronised or pawed was an occupational hazard. My own induction came early in the season, trying to resist an unwanted hug from a stranger on the Pavilion steps. (“It’s OK,” he told me boozily, “we can have a cuddle.”)

In the wake of #metoo, MCC were serious about changing the culture. A senior executive had resigned after an investigation into his conduct. One man was expelled from the club after verbally abusing a fellow member simply for being female. And at the AGM in May 2019, as a woman revealed she had been assaulted during a major match, the membership voted through their first official code of conduct. We were told there were disciplinary panels to investigate breaches, and urged to report incidents straightaway.

A letter had gone out from the president, too, celebrating MCC’s increasing diversity, and encouraging everyone to make new female members feel welcome. Over the course of the summer, I could sense the goodwill efforts: the smiles and nods; the awkward-yet-well-meant conversation starters from the men sitting alongside me; the gentle helpfulness of the stewards. It was these gestures, as much as anything, that persuaded me the only way to feel like a member was to act like one.

So I did. I went along to a members’ forum, where a red-faced gentleman roared about the lack of QUALITY REFRESHMENTS in the Long Room, and demanded the beer be served at a RELEVANT TEMPERATURE. I booked an induction session at the real-tennis court, where I discovered that the trajectory of a heavy, hand-stitched cloth ball is as difficult to predict as Murali’s mystery spin. And before long, I started running into people whose names I knew – people, dare I say, I started to call friends. 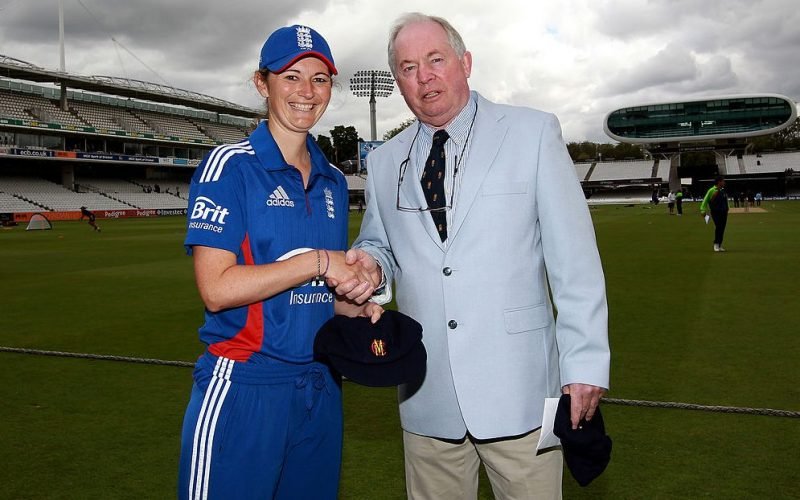 Last day of the season. Rain’s been pouring down all morning, but you cycled through it anyway. Which is why you’re now standing in the ladies, holding your skirt under the hand dryer and wondering whether the mud spots on your tights violate the dress code.

A woman with a grey bob comes in to fix her make-up. Liz. Two hours, it’s taken her, to get here from home, but she couldn’t miss the last day. Never thought she’d have the privilege of watching from this end, after all. Upstairs, over a cup of tea, she tells you how, years ago, a friend suggested she apply. “And I thought, why would they want me? I’ve got no fancy connections, I wouldn’t fit in.” She looks around her. “Best thing I’ve ever done.”

A series of loud creaks emanates from the end of the corridor. Eleven men are moving heavily down the stairs. Liz heads to the benches, but you make for the empty Writing Room. From an armchair, you can watch the game through a vast open window that frames the wicket, as though it were another of the artworks. It’s your new favourite place.

The bowler runs in, arms and legs pumping like he’s Tom Cruise about to hurl himself between buildings. The ball slides down leg, and the batsman tucks it round the corner. There’s a tut from another armchair – you’re not quite alone. You can’t see his face, just the Playfair on the table next to him. But you can tell, over the course of the afternoon, that he really doesn’t like the Middlesex bowling. The Writing Room was somewhere for quiet retreat. It used to have its own postbox; at its desks, the old-timers worked on their correspondence. Plum Warner. Perhaps Lord Harris. They must have heard these same sounds: the background burble of the spectators; the vowels of encouragement from the fielders; the rasp of the pendulum from the wall clock. They watched the field expand and contract, as you do. Maybe they, too, saw an autumn leaf fall from a steel-grey sky.

But the view they knew is long gone. And the evolution of Lord’s continues, right now, right in front of you. Even as play goes on, diggers are at work on the Compton Stand. Tearing down hunks of concrete. Making way for the future. Change at both ends.

Emma John is the author of Following On, Wisden Book of the Year in 2017.

You can order your 2020 Wisden here