Plum Warner had just been selected to captain England in Australia when his efforts in the summer of 1903 earned him a Wisden Cricketer of the Year award.

There could certainly be no more appropriate time than the present to give Mr. Warner’s portrait in Wisden, the MCC having conferred upon the Middlesex batsman the great distinction of captaining their team in Australia. As the tour in the colonies had only been in progress about six weeks when the last pages of the Almanack were passing through the press, nothing can be said here as to the play shown on the other side of the world, but the results of the trip are, in a sense, beside the question. The great point is that it was a very high honour for Mr. Warner to be appointed captain, the only cricketer the MCC committee had asked in preference to him being FS Jackson.

It need hardly be said that if Mr. Jackson had found himself able to undertake the task, Mr. Warner would have been only too delighted to play in Australia under his leadership. Apart, of course, from the Australian trip, Mr. Warner has high claims to consideration, having during the last few seasons fairly won his place among the representative batsman of his day.

A more enthusiastic player would be impossible to find anywhere. Cricket, if one may be permitted the expression, is the very breath of his nostrils. When our season is over, his greatest delight is to journey to some region in which the game is practicable during our winter months, and few men have travelled so far or played in so many different parts of the world. From the time of his school days at Rugby, Mr. Warner was a batsman of great promise, but he made no sudden jump into fame, his position having been gradually won by strenuous and persistent effort.

That he should have been rather slow to get to his best is not surprising, as he did not start with the physical advantages that have made easy the path of many of his contemporaries. Of medium height, small boned and light of frame, he does not by any means fill the eye as great batsman, but having once seen him get a hundred runs, one is no longer left in doubt as to his qualities.

Lord’s has always been his favourite ground, and nowhere else perhaps, despite his varied experiences, is he seen to quite such advantage. From physical reasons, he is essentially a fast wicket batsman, lacking as he does the power to score on soft grounds with anything approaching the facility of a Stoddart, a George Hirst or a Victor Trumper.

Still, he occasionally does well under difficult conditions, playing then with unusual care and waiting patiently for his opportunities. When the sun shines and the ground is hard, he is one of the best of batsmen to look at, combining a most attractive style with a great variety of strokes. His driving on both sides of the wicket is, for a man of his weight and stature, surprisingly hard and he commands a very pretty and effective cut.

It was not his good fortune to do very much in the University match, his efforts against Cambridge in 1895 and 1896 being quite modest, but for the powerful eleven that suffered such an unexpected reverse in 1895, he scored 542 runs with an average of 43, and he will always remember with pride that he took part in the memorable match 12 month later, when Oxford, with 330 to get in the last innings, won by four wickets. In that match he had the bad luck to be twice run out.

After leaving Oxford he steadily improved, batting uncommonly well in 1898 and in the following year reaching his present pitch of excellence. Indeed, one may question whether he has ever played a more perfect innings that his 150 for Middlesex against Yorkshire at Lord’s, in the May of 1899. One famous member of the Yorkshire eleven frankly said that he had not thought him capable of such a magnificent effort. 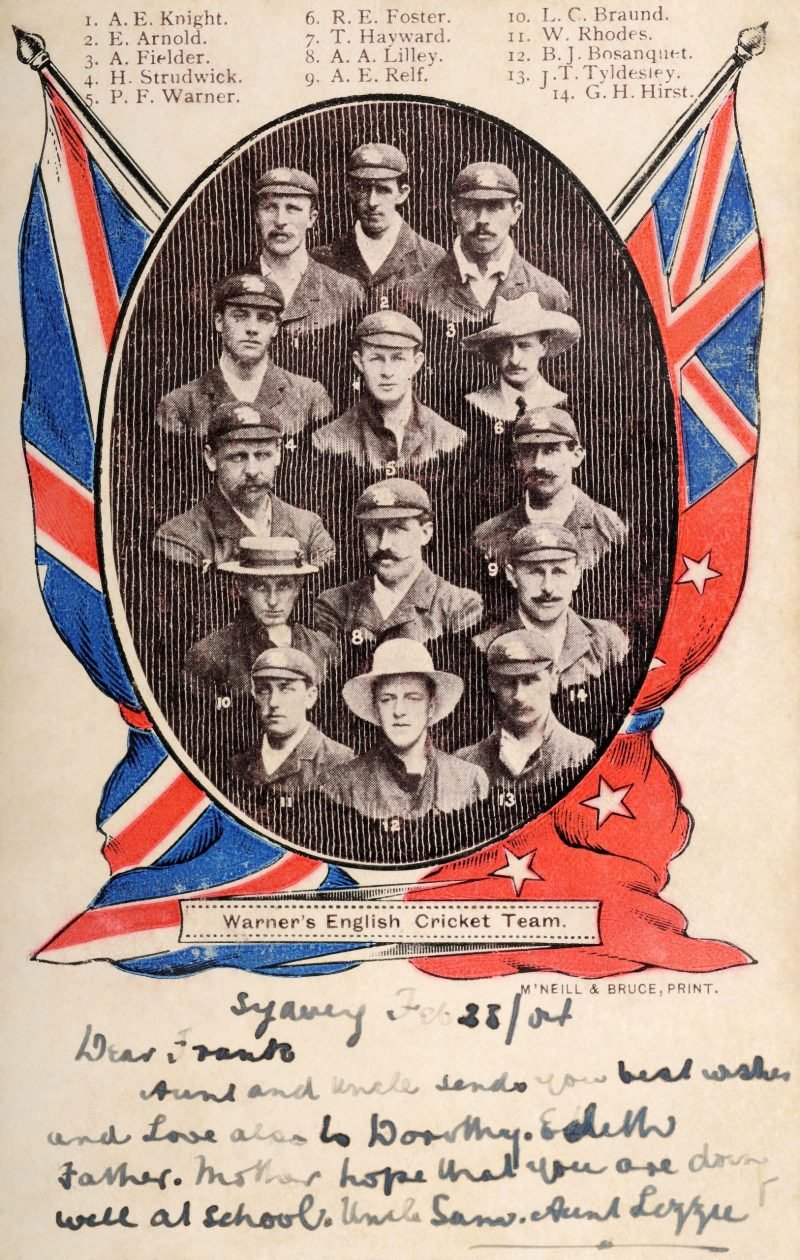 Since then he has firmly held his ground, coming out practically first for Middlesex in 1900, with an aggregate of 1,335 in county matches and an average of 44, and doing still better in 1901 with 1,382 runs and the fine average of 49. The Middlesex batting has, perhaps, never been stronger all through the team than it was in 1901, and Warner stood out above all his comrades. The wet wickets this year and last have been against him, but there is no reason to think that he would have shown any falling off if the conditions had been as favourable as before.

Personally, Mr Warner is one of the most popular of cricketers, and apart from his skill as a batsman, he has, by reason of his contagious enthusiasm, done good for cricket wherever he has played. He has lately taken to writing a good deal about the game to which he is so devoted, and, when cricket is the topic, he can make a capital after-dinner speech.

Plum Warner went on to be become one of the leading figures in the game as player, journalist and administrator. He played in 521 first-class matches, scoring 29,028 runs at 36.28 with 60 centuries.