Reggie Spooner was one of the glamorous figures in Edwardian cricket. His Wisden obituary celebrated a colourful life.

Reggie Spooner played for England at both cricket and rugby football. One of the most stylish opening batsmen in the history of cricket, he possessed a variety of strokes equalled by few even in the Golden Era to which he belonged.

A tall, slim right-handed batsman, he drove with special skill to the off, often at the expense of fast bowlers, and strong wrists enabled him to invest his strokes with surprising power when playing back. In a first-class career for Lancashire dating from 1899 to 1923, he scored 13,681 runs, average 36.28, hitting 31 centuries, five of them of 200 or more, and as an impeccable cover-point held 132 catches.

He established a high reputation as an all-round sportsman when at Marlborough. In the big match with Rugby at Lord’s in 1898 he put together an innings of 139 and the following season, when captain, he made 69 in the first innings and 198 in three and a half hours in the second. In this latter season, he headed the Marlborough batting figures with 926 runs, average 71.23, and in addition took, with slow spinners, 25 wickets for 15.28 runs each.

Not surprisingly he was invited to play for the county of his birth upon leaving school and on his first appearance, against Middlesex at Lord’s in 1899 when 18 years of age, he hit 44 and 83 from an attack including Albert Trott at his best.

For the next three years, half of which time was spent on military duty in South Africa during the [Boer] war, he was lost to cricket; but he returned to Lancashire in 1903 and showed that his skill had not been impaired by absence when punishing the Nottinghamshire bowlers at Trent Bridge for 247, at that time the highest innings ever hit against them. 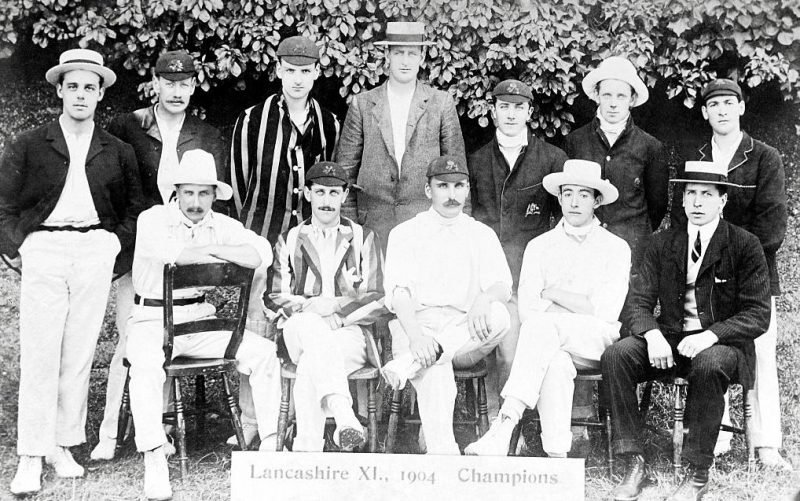 Spooner played ten times for England in England between 1905 and 1912 and in his first match against South Africa at Lord’s in 1912 hit 119. He accepted an invitation to captain MCC in Australia in 1920/21, but injury compelled him to withdraw and thenceforward he was not often seen in the field. He played on 17 occasions for Gentleman v Players. These included the match at Lord’s in 1906, when, though Arthur Fielder took all ten Gentlemen wickets in the first innings for 90 runs, an innings of 114 by Spooner and devastating fast bowling by NA Knox (seven wickets for 110) took the amateurs to victory by 45 runs.

At The Oval in 1911, Spooner obtained 190 against the Players, he and PF Warner (90) putting on 208 for the third wicket. As a centre three-quarter, Spooner played rugby football for Liverpool and he represented England against Wales at Swansea in the 1902/03 season.