Archie MacLaren, captain of Lancashire and England, was one of the great Golden Age batsmen. His death in 1944 prompted a lengthy tribute from Wisden’s editor.

Archie MacLaren, very prominent in cricket during a long career lasting altogether from 1887 to 1923, died on November 17 when nearly 73 years of age. An immaculate batsman possessing the grand manner, he would have gained still higher renown on the playing field but for periods of poor health and the calls of business.

Expert knowledge, obtained by careful study of every intricacy of the game, besides experience in leading his school, his county, the Gentlemen and England, might have made him supreme as captain, but he lacked the buoyant optimistic temperament so necessary for complete success in cricket and was easily upset by disagreement with selectors in being given players whom he did not consider suitable to the occasion. 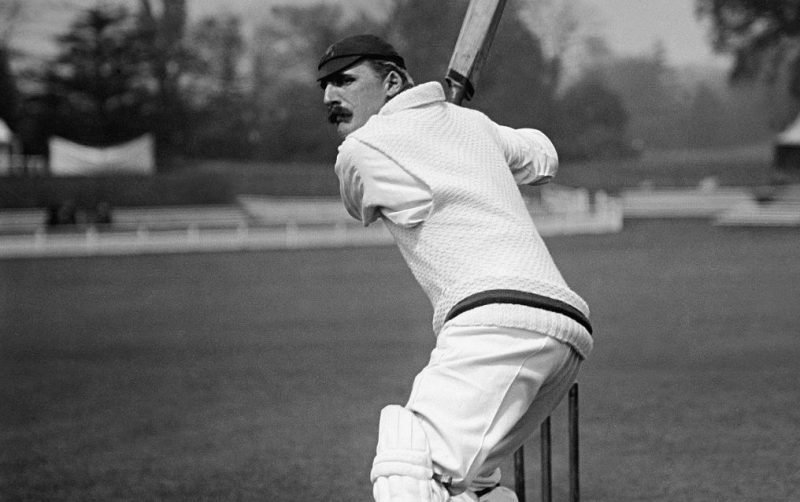 To satisfy his own exacting ideas of perfect play and leadership, as described in his book Cricket Old and New, he required the position of dictator in order to pick his own eleven and control them with expectation of ready response to his every word or gesture. Unfortunately for MacLaren, such idealistic conditions were never forthcoming on the big occasion, but the responsibility for this rested partly with him more than once, when he was one of the selectors. Facts bear this out, as will be seen; but in batting he accomplished much, and will remain a magnificent figure in the eyes of all who saw him making runs.

He will always be remembered for his 424 for Lancashire against Somerset at Taunton in 1895, a first-class score that stood unbeaten for nearly 33 and has been exceeded only by Don Bradman, who now holds the record with 452 not out, and W.H. Ponsford in Australia. For choice as a Test Captain he remains unrivalled, having in the course of 11 years led England in 22 matches, and his 35 appearances against Australia have been surpassed only by Hobbs and Rhodes during far longer periods.

Standing erect with bat raised well behind him, he was ready to receive any kind of delivery

Often unfortunate when commander in these big events, he never led England to victory in a rubber, but showed his exceptional knowledge of the game when, having asserted that he could pick a side capable of beating the all-conquering Australian team of 1921, he fulfilled his prophecy by selecting and captaining eleven amateurs, who, at Eastbourne at the end of August, gained a victory by 28 runs after being 130 behind on the first innings. In that climax to his career in England he retained his superb figure, though white hair suggested more age than the approach of his 50th birthday. He finished his intimate association with first-class cricket by acting as manager to S. B. Joel’s team that toured South Africa in 1924-25.

Son of Mr James MacLaren, for many years Hon Treasurer of Lancashire CC, Archie MacLaren was born on December 1, 1871, at Manchester, and began his important cricket life auspiciously when only 15 years of age by scoring 55 and 67 for Harrow against Eton in 1887. He finished four years in the eleven as captain, and with 76 in a total of 133 off the Eton bowlers at Lord’s, showed such form that a month later he appeared in county cricket, and in his first match for Lancashire played a fine innings of 108 against Sussex at Hove. 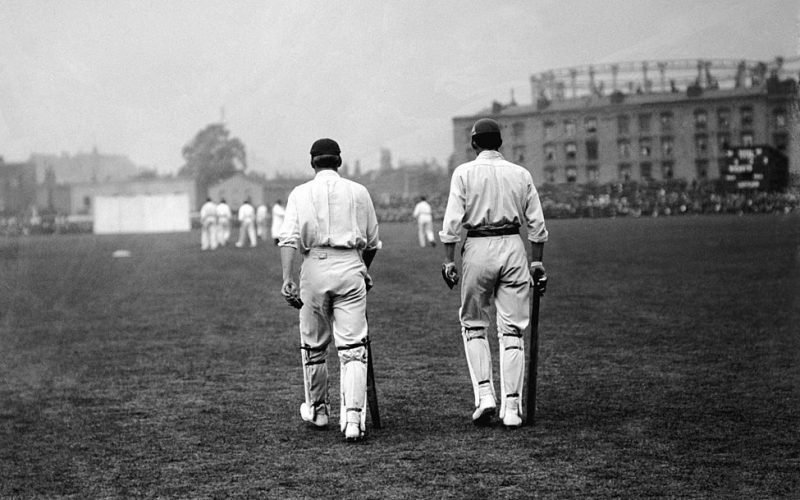 His obvious powers took some time to ripen, but within a few years he reached the front rank of batsmen. Possessed of great resource, he could, according to circumstances, play a cautious or a brilliant game that made him splendid to watch from the ringside. Standing erect with bat raised well behind him, he was ready to receive any kind of delivery and would force the ball away with every sort of powerful stroke.

Eight times in England and once in Australia he obtained over 1,000 runs in a season, his largest aggregate being 1,886 (average 42) in the summer of 1903. He enjoyed pronounced success on the Sydney ground, where in the winter of 1897-98 against New South Wales he scored 142 and 100 in one match, 109 and 50 not out a month later against Australia, 61 and 140 in another match with New South Wales, and 65 in the last Test. He also got 124 against Australia at Adelaide and 181 at Brisbane, altogether six centuries on that tour, in which he made 1,037 runs, average 54.57, in first-class matches. No wonder that MacLaren is still talked of in Australia, and especially at Sydney, for his wonderful batting as an object lesson for everyone.

In Test matches between England and Australia he made 1,931 runs, four times reaching three figures and averaging nearly 34. Twice in the Nineties he toured Australia with teams led by A.E. Stoddart, and in the winter of 1901-2 he himself took out a side; but in Test matches this team, like the second captained by Stoddart, suffered four defeats and gained only one victory. In three home seasons – 1899, 1902 and 1909 – England, captained by him, won only two of 14 engagements and lost each rubber. MacLaren visited America with K.S. Ranjitsinhji’s team in 1899, and the Argentine in 1911-12 with the M.C.C. side led by Lord Hawke, and he also played in India.

He astonished everyone by taking S.F. Barnes, of small experience in first-class cricket, on the 1901-2 tour in Australia. Yet he could not keep that wonderful bowler in the Lancashire county XI, and in 1909 he failed to persuade his county colleague, Walter Brearley, then the best of our fast bowlers, to accept a last-moment invitation to play for England at Lord’s. 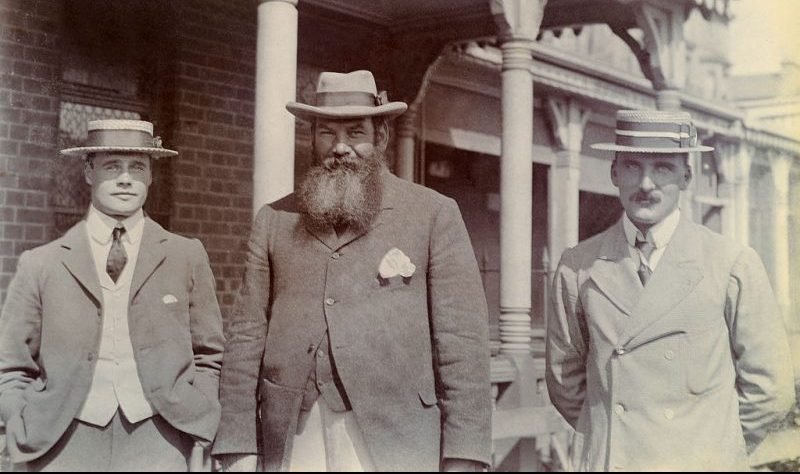 Opinions differ as to the ability of MacLaren as a captain. Everyone agrees that he held strong views and was loath to depart from them even if his leadership actually suffered. In fact, it appeared more than once that he pursued ways that showed up some curious decision of selection committees in carrying out their duties.

Undoubtedly he found occasional brilliant inspirations, born of his exceptional knowledge of cricket, but he committed some blunders difficult to understand in a man of his experience. A notable illustration of his erratic disposition occurred at The Oval in the Test match of 1909. To begin with, having the final word in the composition of the eleven, he decided, despite fine weather and a hard wicket, that England should take the field without a good fast bowler, John Sharp, of Lancashire, being preferred to Buckenham, of Essex. Then, with the score nine and one man out, he took Sidney Barnes off in favour of Sharp, mainly a batsman, and kept D.W. Carr, a googly bowler, aged 37, on at one end for an hour and a half, an action for which it would have been difficult to excuse anybody. That was the match in which Warren Bardsley made 136 and 130.

Another lapse from wisdom was at Old Trafford in 1902, when he sent to deep square leg Fred Tate, always a short slip; and that historic dropped catch brought about England’s defeat in a match upon which the rubber depended – only victory in that engagement could have prevented the honours going to Australia. Yet such was his knowledge of the game that at Leeds in 1904 he gave Yorkshire first innings, and Lancashire, by avoiding defeat in George Hirst’s benefit match, went through the season unbeaten and were champions for the only time under MacLaren’s captaincy.

An incident in which MacLaren took strong action was of a kind without precedent or repetition, so far as known, and it aroused severe criticism. In July 1907 at Lord’s on the second day the paying public were admitted although saturated turf showed no sign of drying and any cricket was extremely unlikely. Yet the stumps were set, and when pulled up at quarter to five some of the crowd, after demonstrating in front of the pavilion, walked across the pitch. After prolonged discussion between the captains – Gregor MacGregor led Middlesex – and umpires, this statement was handed to the Press by A.C. MacLaren himself. “Owing to the pitch having been deliberately torn up by the public, I, as captain of the Lancashire Eleven, cannot see any way to continue the game, the groundsman bearing me out that the wicket could not be again put right.”– A.C. MacLaren. As described in the 1908 Wisden, the match was accordingly abandoned. Rolled next morning for the regulation ten minutes, the pitch showed little trace of the damage.

Naturally such a cricketer received many tributes to his ability. In January 1896 the Lancashire club elected him a life member and presented him with a gold watch and chain in recognition of his record score and of three successive hundreds hit in the course of eight days at the end of August that same season – 152 at Old Trafford against Nottinghamshire, 108 at Lord’s against Middlesex, and 135 at Leicester. Ten years later Lancashire made him a special presentation. In September 1921 he accepted an appointment to coach young players of the county, but an injured knee compelled his resignation early in the 1923 season.