It took George Hirst a while to make his name for Yorkshire and England, but he became one of the greatest all-rounders. He was a Wisden Cricketer of the Year in 1901.

George H Hirst was born at Kirkheaton, on September 7th 1871. He joined the village club about 1885 and remained connected with it until 1889, in which year the eleven carried off the Lumb Challenge Cup. In the cup ties Hirst did very well as a bowler, and made so good an impression that late in the season he was given a trial for Yorkshire at Huddersfield against Cheshire.

In this, his first appearance in anything like good class cricket, he took two wickets but only scored about a half a dozen runs, his batting powers at that time being quite undeveloped. In 1890 he had a professional engagement at Elland, and in 1891 at Mirfield. Then in 1892 he became associated with Huddersfield, and his real career commenced. With local cricket at Huddersfield it may be added he kept up a close connection, till the Yorkshire Committee stopped the members of the county eleven from taking club engagements.

It was in 1892 that Hirst became known to the general public, his first match being for Yorkshire against the MCC at Lord’s. Without doing anything sensational he yet showed such capital form, both as bowler and batsman, that no good judge who saw the game could doubt that an all-round player of far more than ordinary promise had come forward. He took four wickets for 29 and two for 58, and though so little was thought of his batting that he was sent in last in the first innings, he scored 20 and not out 43.

He was then less than 21 years of age, but in appearance a small Hercules, and it was quite certain that whether or not his skill as a cricketer developed, he would never fail for want of strength or stamina. The present writer happens to remember the match very well, and can recall vividly the energy with which Hirst bowled at the late William Barnes, compelling that brilliant batsman, who scored 61 and 71, to play in each innings an unusually strict game.

Still, though his first appearance was such a success, Hirst did not as a batsman do much for Yorkshire in 1892, only scoring in 22 matches 243 runs, with an average of ten. Though he tired before the summer was over and lost his place in the eleven, he bowled up to a certain point with excellent results, and in all matches for the county, took 69 wickets for just over 16 runs apiece. In the first-class county matches, however, only 17 wickets fell to him. 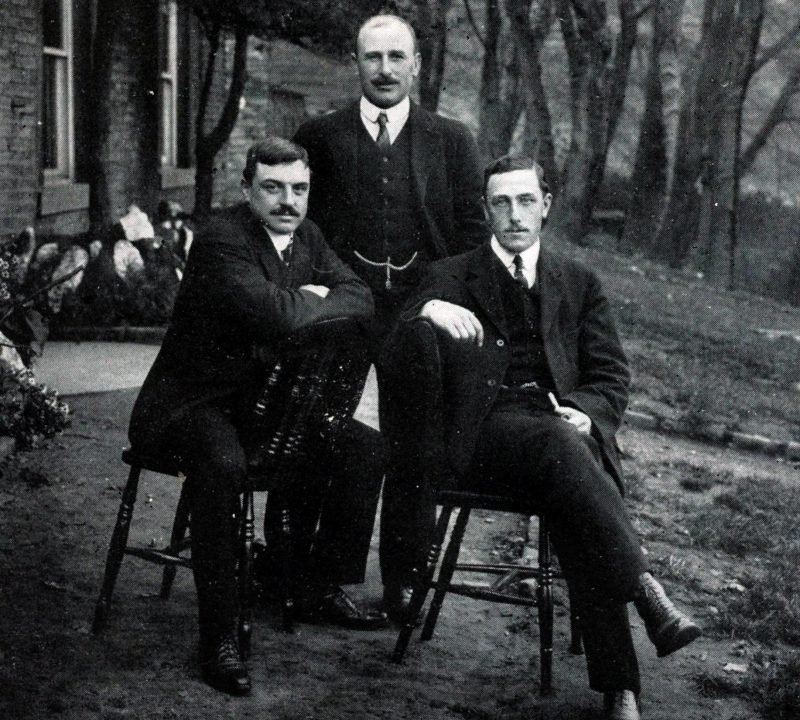 For some time after his first season Hirst’s career was one of steady progress rather than of brilliant achievement. He proved quite worthy of his place in the Yorkshire eleven, but met with no startling success. Even so early as the season of 1894, however, he made a score of 115 not out, and thus gave an unmistakable indication that, as afterwards proved to be the case, he would win fame more as a batsman than as a bowler.

In 1895, his batting suffered a temporary decline, but he probably bowled better than in any previous or subsequent season, taking 130 wickets for Yorkshire in first-class county matches alone, and 150 wickets for the county in all engagements. In 1896 his position among the leading professionals of the day was firmly established, as in that year he performed the double feat of scoring over a thousand runs in first-class matches, and taking more than a hundred wickets. To be quite exact he made 1122 runs with an average of 28, and took 104 wickets at a cost of something over 21½ runs each.

No one plays the game more earnestly, or works more strenuously for his side

From that time Hirst has only once looked back, but while he has developed enormously as a batsman he has paid the penalty for getting so many more runs by taking fewer wickets, and at the present time he is more of a change than a standard bowler for Yorkshire, having now and then his deadly days, but not bowling with consistent success in match after match. In the winter of 1897/98 he went out to Australia with Mr Stoddart’ second team, but it cannot be said that he did himself justice in the Colonies. In the eleven-a-side matches he only scored 338 runs with an average of 28, and his bowling was so utterly ineffective on the beautiful grounds at Melbourne, Sydney and Adelaide, that the nine wickets he took cost him over 75 runs each.

He was not in particularly good form when he came back to England, and apart from a score of 130 not out he had a poor season for Yorkshire in 1898, but a year later he was quite himself again, batting better for Yorkshire than he had ever batted before. In all matches for the county he scored 1,546 runs with an average of 37, only FS Jackson and Brown being in front of him.

In 1899, moreover, he had the distinction of being picked for England at Trent Bridge in the first of the five Test matches against the Australians. Unfortunately, he met with no success either as batsman or bowler, but his fielding was so superb as to almost justify his selection. What he did last summer will be found fully set forth in the Almanack in the section devoted to Yorkshire.

A better man in a county team than Hirst is at the present time not easy to find. No one plays the game more earnestly, or works more strenuously for his side. Blessed with any amount of pluck and confidence he is just the man to do his best under difficult conditions, and there is scarcely a batsman in England who can hit with greater power and dash on a wicket spoilt by rain. What he can do in the way of pulling on slow wickets must indeed be seen to be believed. His bowling, as we have said, has declined with the advance of his batting, but his fielding remains perfect. It is no exaggeration to describe him as the very best mid-off in the county.