In the midst of a phenomenal run of form, Mohinder Amarnath played a key role in India’s shock 1983 World Cup triumph. He was named a Wisden Cricketer of the Year the following spring.

On May 3, 1983, Mohinder Amarnath reached his 1,000 Test runs for the year. No-one has achieved that target by so early a date, and while it has to be admitted that he was enabled to do this feat by playing a plethora of Test cricket, it should be acknowledged that he could hardly have triumphed in more adverse circumstances than on Indian tours of Pakistan and the West Indies.

Moreover, during the 1982/83 season Amarnath hit more runs – 2,355 at an average of 81 – than anyone else has ever done in a first-class season outside England. Still on the crest of a wave, he followed up by winning man-of-the-match awards in the World Cup semi-final against England and in the final against West Indies, when India achieved one of the game’s most unexpected victories.

Yet Amarnath, and India, merely had walk-on parts during the first two World Cup tournaments. And in England he had an even lower profile than elsewhere, since he had played only two Test matches there, both in 1979 and without distinction. So the half-year or so of personal success that the Indian enjoyed, as triumphant as any cricketer can have known, came as a surprise to most followers of the game in England.

Mohinder Amarnath Bhardwaj, or Jimmy as he prefers to be known, was born in Patiala on September 24, 1950. His father, Lala Amarnath, who scored India’s first Test century, was employed in the retinue of the sports-loving Maharajah of Patiala to encourage the development of cricket within his north Indian state.

From the start Lala was an influence upon his three sons, all of whom played first-class cricket (the oldest of them, Surinder, going on to represent India as a left-handed batsman). The father, renowned as something of a martinet, taught Mohinder to love cricket to the exclusion of all other games. Another paternal instruction was that any short ball was there to be hooked.

Although Mohinder made his Test debut as a medium-pace in-swing bowler (like his father) against Australia in 1969, batting soon became his chief concern and the hook his forte. The stroke helped him to his first major success in Australia in 1977/78 during the World Series controversy, and again when India toured Pakistan and the Caribbean last winter. But the hook has been the reason behind not only his ups but his downs.

Early in 1979, in a Test match against Australia in Bombay, Amarnath emerged in a solar topee (again in imitation of his father), tried to hook Rodney Hogg and fell on his wicket. Later that year, during India’s tour of England, he was hit on the head half a dozen times and kept refusing to wear a helmet. The culmination came when he failed to pick up a ball from Richard Hadlee out of a dark background at Trent Bridge: he missed the ball and it fractured his skull. 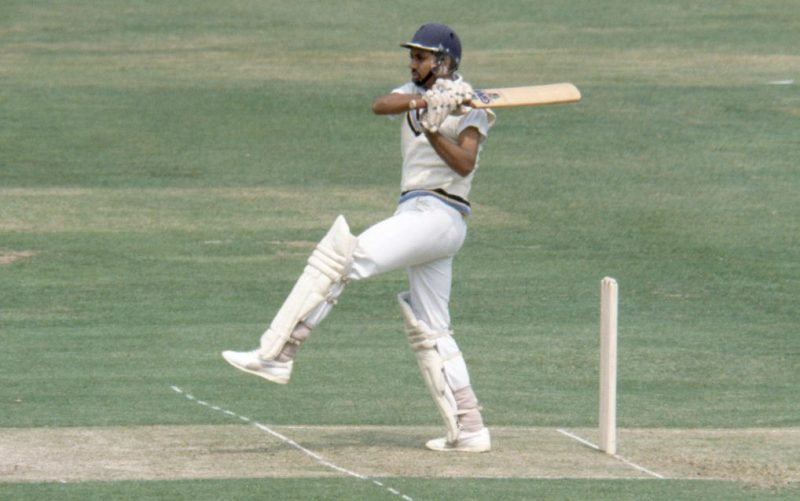 Mohinder Amarnath was known for his positive approach against fast bowling

It was several months before Amarnath could play again; and then he found that the injury had damaged his eyesight. So as a temporary measure he wore spectacles, and as a permanent one he adopted an open-chested, crouched stance after the style of Jim Parks or the late Ken Barrington. But his courage had in no way been impaired.

It was some time, however, before India’s selectors called on Amarnath again. When England toured there in 1981/82 he was not chosen for any Test match, nor for India’s return tour in the summer of 1982. Amarnath was then playing in Lancashire League cricket for Crompton (after four seasons with Lowerhouse) and, seeing that India’s batting line-up had one or two vacancies, felt a renewed determination to prove himself at international level.

He duly did so during India’s visit to Pakistan in 1982/83. While Imran Khan harassed his colleagues, taking 40 wickets in the six-match series for fewer than 14 runs each, Amarnath scored three centuries and three fifties in his ten innings.

In the West Indies immediately afterwards he carried on against Roberts, Marshall, Holding and Garner from where he had left off against Imran and Sarfraz. He was selected as the player of the series on either side after hitting 598 runs in his nine innings. The hook shot stood him in good stead while his team-mates tried vainly to contend with the imitation of body-line which Malcolm Marshall delivered from round the wicket.

Few batsmen can claim to have withstood the four-man West Indian pace attack as it has been constituted in recent years: Geoff Boycott and the Australian Bruce Laird have succeeded defensively, Graham Gooch and Amarnath by aggressive means.

This purple patch continued into the World Cup, where Amarnath scored 237 runs in eight innings (twice run out), and was an effective reserve seamer even though his run-up had dwindled to an amble. Since the competition followed a month after India’s series in the Caribbean, he was by then well attuned to West Indian pace. Indeed this familiarity with the West Indies bowling is one reason that Amarnath gives for India’s winning of the cup. The presence of good fielders and stroke-makers, not all that common in Indian sides of the past, was another factor, along with the slow pitches that prevailed. 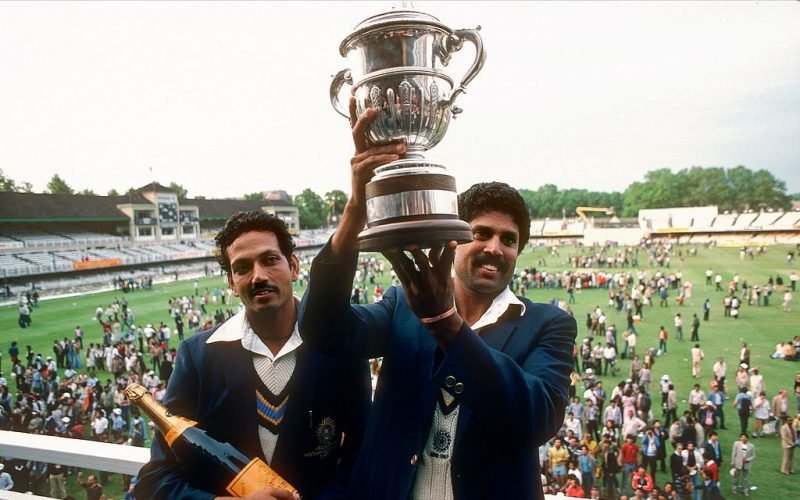 The iconic one! Mohinder and skipper Kapil Dev with the 1983 World Cup trophy at Lord’s

His bowling at Old Trafford, where the pitch had no grass and was very uneven was as important as his 46 (run out) when India chased a modest England total. In the final he stood firm while the West Indian bowling was at its most hostile and Srikkanth went for his ebullient shots at the other end. Together they shared the highest partnership of the match. Finally, his amiable, almost apologetic medium pace finished off three of the last four wickets for 12 runs.

However, and sadly, the man whom Imran Khan amongst others called the best player of fast bowling in contemporary cricket was brought down to earth during the latter half of the year. In the home series against Pakistan and in the first two Tests against West Indies, he was unable to reach double figures. Whether the reason was delayed shell shock or related to that inexplicable phenomenon known as form, the Indian god was found to have feet of clay.