Lance Gibbs was one of the greatest off-spinners in the history of the game, but it was a season in county cricket in 1971 that earned him a Wisden Cricketer of the Year award.

Only six bowlers managed to take one hundred wickets in the English summer of 1971 and among them was Lance Gibbs, the famous West Indies off-spinner, whose great efforts only fractionally failed to lift Warwickshire to the top of the County Championship for the first time in 20 years.

For a man in his 37th year, Gibbs accomplished no mean feat in sending down 1,024 overs and counting 131 victims at an average cost of 18.89. He was 24 wickets ahead of his nearest rival, Peter Sainsbury, another expert in the art of slow bowling.

Lancelot Richard Gibbs was born in Georgetown, Guyana, on September 29, 1934. He made his first-class debut at the age of 19 in February, 1954, against MCC for British Guiana, as it was then. He took two wickets which cost him 126 runs. The only special significance of that far distant occasion was that those two victims had already made a distinguished mark in the game. They were Tom Graveney, caught in the deep for 231, and Denis Compton, bowled for a more modest 18. No one knew it then, but Gibbs had arrived.

Yet strangely enough the bowler who was to reach the greatest heights as a master of off-spin began bowling leg-breaks. Gibbs readily confirms that in his early days he basically turned the ball the other way. He explains: “I used to slip in the occasional off-break and in consequence my length used to suffer.” That made it difficult for a captain to set a field. So the man who came to the fore playing for the Demerara Cricket Club, as later did Clive Lloyd and Roy Fredericks, decided to concentrate on off-spin.

He joined Warwickshire in 1967 before the days of instant registration and had to spend 12 months qualifying. There were soon clear hints of his dedicated professionalism. During a Warwickshire game against Surrey at The Oval in that first summer only a few people in the crowd noticed a lean, lithe figure slip on the field as sub when another Warwickshire player ran off. It was several moments before he was identified. Then someone did say, ‘It looks like Lance Gibbs’.

That onlooker was right on target. It was Lance Gibbs, stepping into the breach as 12th man when Warwickshire, through injuries and Second XI calls, were short of personnel. How many players of such eminence have made so modest a debut in English first-class cricket?

In 1968 Gibbs was on the official active list for Warwickshire and made his mark with 67 wickets. He did not always enjoy the best of luck and quite plainly was none too happy bowling round the wicket. Nevertheless, it looked as if Warwickshire would reap a rich harvest in the next two years of his contract. They had been desperately short of a class off-spinner for a long time.

As it turned out, they were soon to be deprived of the services of Gibbs. In the summer of 1969 there was a West Indies’ tour. There was some talk to the effect that their Test players on the staff of English counties would only be released for Tests, but the official verdict was more sympathetic to the tourists.

Warwickshire hoped for better things in 1970 but again events took an unexpected turn. The ill-fated South African tour was cancelled, the Rest-of-the-World series arranged to fill the gap, and Gibbs was called up for four of those games. In that summer he claimed only 48 wickets for the county. 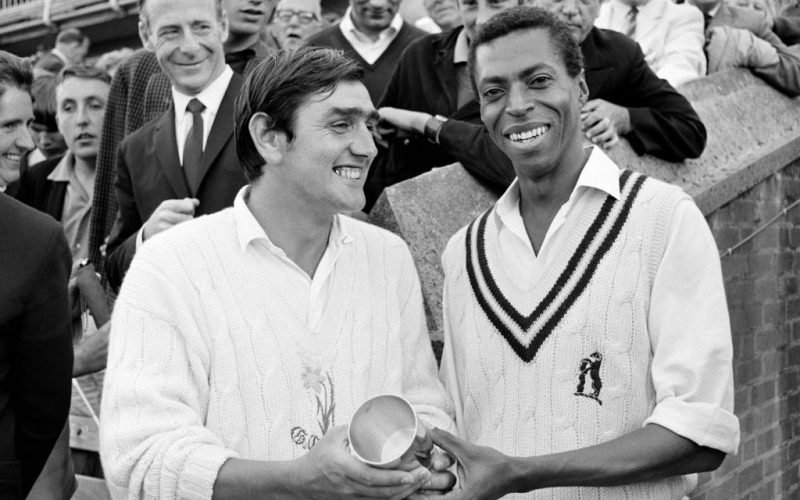 Then came 1971, expected to be Gibbs’s swansong in English cricket. Yet again there were to be surprise developments. As early as February, when the Warwickshire captain, Alan Smith, was on a scouting mission in Guyana (the trip which resulted in the arrival at Edgbaston of Alvin Kallicharran, the batsman described as a left-handed Kanhai) Gibbs ventured into the crystal-ball business. He firmly declared that in his farewell season for Warwickshire he would top 100 wickets.

Soon after returning to this country he repeated that promise and went even further, insisting that he would be first in the three-figure field. Brave words indeed. They came from a bowler who knew what he was talking about. Gibbs in fact bowed out (or so we thought at the time) by making the dash to 100 wickets look like a one-horse race. Plainly a great deal of the improvement was due to a much less arduous winter after so many years of cricket round the clock.

Gibbs is a critical self-analyst. He agrees that this was the first season (significantly with uncovered pitches) in which he made a success of the essentially English style of bowling round the wicket. That view is readily confirmed by Alan Smith, the man in the best position to express an opinion, since the Warwickshire captain is, of course, his side’s wicketkeeper, in addition to being a player of wide experience. He makes the valid point that in English county cricket, where every player knows each other’s strengths and weaknesses so well, the top premium for slow bowlers is accuracy of line. Smith points out that Gibbs became infinitely more effective immediately he began to bowl much closer to the stumps. 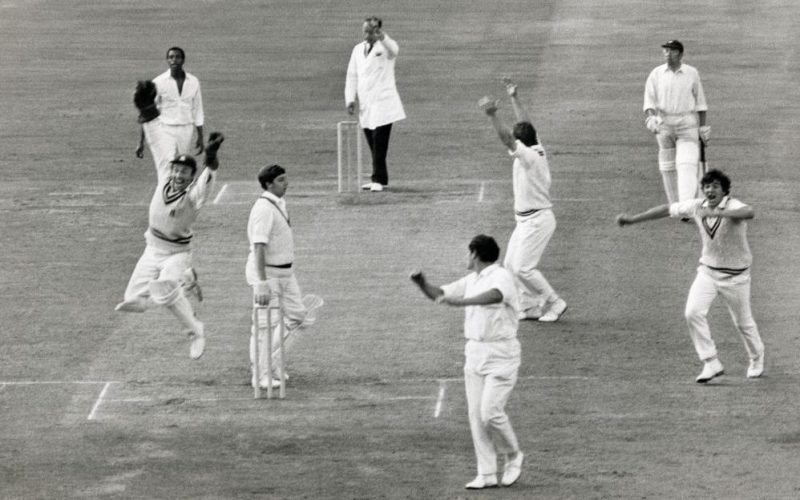 Lance Gibbs took the last wicket to give Warwickshire a win in their final 1971 County Championship match against Yorkshire at Edgbaston. They finished second after Surrey finished on the same number of points a week later but with more wins

Another aspect of the Smith diagnosis is of special interest since in this instance the change in technique may have been more instinctive than intentional. Hitherto Gibbs had exploited every conceivable change of pace, flight and length but had never set out seriously to capture the essentially English off-spinner’s art of being able to bowl the ball which drifts away from the right-handed batsmen. Masters of this art, of course, have been bowlers like Titmus and Illingworth. In 1971 Gibbs learned the trick, too, and did so well enough to bowl Geoff Boycott as early in the season as May 10.

Cricket knows no keener team man. Again one can do no better than quote Alan Smith, who says, simply but sincerely, “As far as Gibbs is concerned, ‘We’ means Warwickshire.” In all his county cricket, Gibbs has remained a fascinating bowler to watch. These days, praising variety as a virtue is all too commonplace a habit and it does less than justice to Gibbs. He is essentially an active bowler, taking less time to bowl an over than almost any other spinner. He can contain frustratingly without being purely defensive, restrict without ceasing to attack. In almost all the Gillette Cup cricket he has played for Warwickshire, notably their unsuccessful semi-final against Kent at Canterbury last summer, he has been their outstanding bowler.

His stamina is a story in itself, his courage unlimited. Very few knew that a considerable proportion of those 1,000-odd overs last year were bowled under the serious handicap of a nagging groin injury in addition, at times, to a painfully sore spinning finger. As if that were not enough, during the last five or six weeks of the season he continued playing with a chipped bone in his left thumb. No one who saw him end an innings with a tremendous catch off his own bowling against Middlesex at Coventry would have suspected any such injury.

Accepted as one of the dressing-room’s elder statesmen, Gibbs can equally give and take advice. He has no mean reputation as a student of racing, and thereby hangs another tale. At Trent Bridge last summer one of the country’s largest bookmaking firms added a new amenity by opening a betting shop. They catered for cricketing punters on horseracing and even ventured into wagers on cricketing chances of every description, such as naming the most successful bowler of the day. They erred sadly in laying odds of 5-2 AGAINST Gibbs claiming that distinction when Warwickshire visited Trent Bridge. True, they took only two wickets in a weary day in the field, but both fell to Gibbs!

Even the supreme solo effort by Gibbs just failed to keep Warwickshire at the top of the table, although they did finish with the same points total as Surrey. But the summer ended with the good news that Mr Forbes Burnham, the Prime Minister of Guyana who had originally appointed Gibbs to an important Sports Council post, had smoothed the way for leave of absence for another summer with Warwickshire.

A widely travelled cricketer, Lance Gibbs has altogether played in 56 Tests, including those four for the Rest of the World. He has appeared for West Indies teams in India and Pakistan, 1958/59, Australia 1960/61, England 1963, 1966 and 1969 (vice-captain), India and Ceylon 1966/67, Australia and New Zealand 1968/69 (vice-captain). Besides playing regularly for Guyana he has assisted Burnley in the Lancashire League and Whitburn in the Durham League. In 1969/70 he played in the Sheffield Shield in Australia.

Related Story: The pace race – how England’s quicks are faring ahead of the New Zealand challenge

Of his many notable feats in Test cricket, stand his three wickets in four balls against Australia in Sydney in 1960/61 after being omitted from the first two Tests, and then in the fourth at Adelaide he did the hat-trick – the first against Australia this century. Three times Gibbs has taken ten wickets in a Test and thirteen times five wickets in an innings. Altogether, his record for West Indies in 52 Tests is 209 wickets, average 27.85.

So Gibbs will be back again in 1972, disturbing news for English batsmen. But so great a cricketer will be welcome once again wherever he goes. So will his two closet admirers – his six-year-old son, who promises to be a better batsman than his father, and his four-year-old daughter.