Ken Higgs was quite a force for Lancashire through the late Fifties and Sixties and made a huge impact in the 1966 home series against the West Indies. He was named a Wisden Cricketer of the Year in 1968.

Kenneth Higgs has reached the top of the tree in cricket on natural ability. Born at Kidsgrove near Stoke-on-Trent on January 14, 1937, this strongly built seam bowler from Staffordshire took to cricket and football in the manner of all physically fit youngsters. He was never coached to any real extent nor did he model himself on any particular bowler.

He joined Lancashire on a special registration from his native county in readiness for the 1958 season and at once made his mark. In his very first Championship match, against Hampshire at Old Trafford, he followed up the taking of two first-innings wickets for 65 with an analysis of seven for 36 in the second innings. At last there were indications that Lancashire had found the partner that for years Brian Statham had so badly lacked.

Higgs began his cricket at High Street Secondary Modern School, Tunstall, near Stoke, and did, in his own words, “no better and no worse than the other boys.” Certainly, he had no early ideas of becoming a professional cricketer. His thoughts lay more in football and although this modest man will never say so I gather that his form and fitness as a teenager who joined the staff of Port Vale at a very early age hinted at a promising future in soccer.

As a centre-half he was making steady progress with the Port Vale junior sides when selected for an FA Youth Team tour of Germany in the winter of 1953/54, but military service intervened and checked his progress in League football.

Posted to Crookham, near Aldershot, as a member of the RAMC, Higgs was a natural choice for both his unit’s soccer and cricket teams. He began to enjoy his cricket after watching his brother, Roy, play for Meakins, a Staffordshire League side, now known as Sandyford CC.

Pressed into service because a player failed to turn up, Higgs impressed the Meakin selectors sufficiently to be chosen regularly for their second team. In the Army he advanced from his unit side to his Corps team and eventually played for an Army side alongside Harold Rhodes, the Derbyshire fast bowler.

When released from military service Higgs returned to football with Port Vale and cricket in the Staffordshire League. His consistent performances not only gained him a regular place in the Meakin first team but also led to his selection for Staffordshire in Minor County cricket.

Ken Higgs was on the way up. As he produced several outstanding returns, his captain, Dennis Haynes, recommended him to Lancashire. Consequently John Ikin, another native of Staffordshire, who was leaving Old Trafford at the end of the 1957 season, went along to convince Higgs that there was a future ahead of him with Lancashire.

Unknown to the player, Higgs had been watched by the Lancashire coach, Stan Worthington, the former Derbyshire and England all-rounder, whose report to the Old Trafford committee urged prompt action to secure the services of a young bowler Worthington considered “might develop into another Alec Bedser.”

In ten years, Higgs has gone a long way to justify Worthington’s words and although he has had his lean spells, his figures, season by season, illustrate the determination and dedication with which he has gone about earning a reputation as a seam bowler who always commands respect. In his first season with Lancashire, Higgs captured 62 wickets at a cost of 21.47 runs each and he won his county cap in 1959 when he claimed 99 wickets, but paid 26.84 each for them and needed to cure a tendency to stray down the leg side.

Taking heed of sound advice from the Lancashire coaches and from his new ball partner, Statham, then at the height of his career, Higgs became a better bowler than ever in 1960 when he captured 132 wickets at 19.42 per victim. This afforded conclusive proof that Lancashire’s new ball attack was equal to the best in the country. Higgs had produced his first and only hat-trick in first-class cricket against Essex at Blackpool.

In 1961, his number of victims declined to 102 and they cost him over 30 runs each but there was still considerable menace about the bowling of Higgs who had to contend with some slow pitches and different slip fielding.

There was something of a slump in his form in the 1962, 1963 and 1964 seasons when his victims numbered 66, 71 and 65 respectively, but this was a period of stress and strain for the Staffordshire bowler whose three-year contract was completed and was followed by annual bargaining for better terms and more security.

He suffered much from a loss of form attributable to uncertainty about his future and was again plagued by a tendency to bowl far too often down the leg side, and it was being freely said at Old Trafford that Higgs had bowled himself out. He was dropped for several matches but worked hard at the nets and in Minor County and Second Eleven matches to regain both form and fitness.

Then in 1965, he captured 122 wickets at just over 20 runs each and won his place in Test cricket by being selected for England’s last match of the series against South Africa as well as gaining a place in the MCC touring team that visited Australia and New Zealand the following winter.

Ken Higgs was back on top back on top but he had an unlucky Australian tour when illness and injury at a crucial time kept him out of four Tests after he had bowled with much promise in the first encounter at Brisbane. In New Zealand, he regained his place and his form. When the West Indies toured England in 1966 Higgs, alone among the 24 players chosen by the selectors, appeared in all five Tests. England lost the rubber, but won the final Test at The Oval when Brian Close made his debut as captain. In the five match series Higgs bowled 236 overs and was easily England’s most successful bowler with 24 wickets. 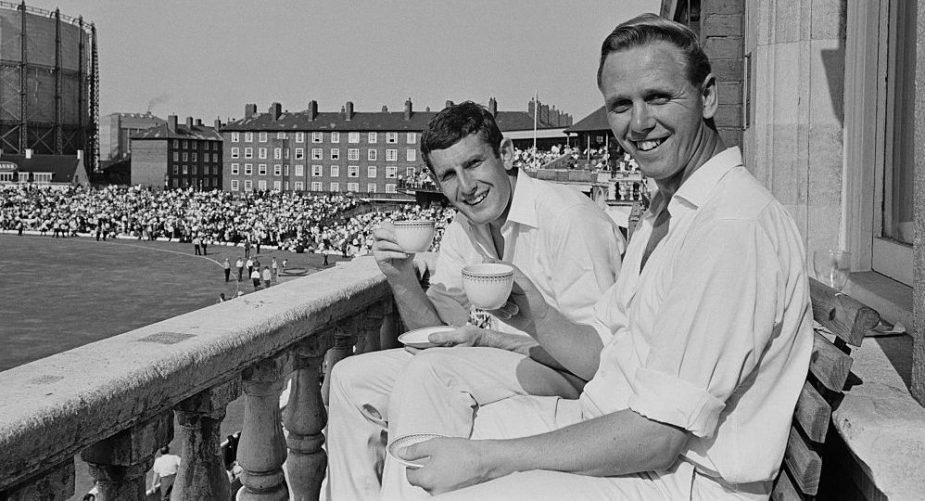 These cost him 25.45 runs each, but in almost every innings the Lancashire bowler gave his side the encouragement of an early wicket, for he was usually the master of that stylish and prolific West Indian opening batsman, Conrad Hunte, whom he dismissed on four occasions. Test match demands kept him out of ten Lancashire matches, but whenever he was on county duty Higgs was always a dangerous bowler and his haul of 96 wickets for 20.77 each bore testimony to his form and fitness throughout the summer. Last summer, Higgs was again first choice for England when the Test series against India opened at Leeds, but indifferent form cost him his place for the next two matches, though when Pakistan took over, Higgs was back again and rendered admirable service so that the season brought him 95 wickets in all at a cost of 16.92 runs each.

His balance sheet at the end of ten seasons in first-class cricket discloses that in all matches Higgs has captured 976 wickets at a cost of 24 runs each and when he went out to the West Indies with the MCC touring side in December he needed 24 more victims to complete 1,000.

With the bat Higgs cannot claim to be a stylist but he must not be under-rated. His left-handed stance and keen eye have so far brought him 2,453 runs for a double-figure average and he has certainly had his moments as a run-getter. His best innings, both from the point of view of figures and value, was undoubtedly the 63 he hit for England in that final Test against the West Indies at The Oval in 196 when he and John Snow put together a last-wicket partnership of 128 which was only two runs short of the record for all Test cricket. The sweep brings Higgs most of his runs but he can attack and defend as the occasion demands and has risen, at times, to the number seven position in the Lancashire batting order. Like his bowling, right arm medium-pace with a high degree of liveliness off the pitch, Higgs’s batting has proved of great value to Lancashire on occasions and although he prefers to field in the outfield where he is a sure catcher of the ball and a speedy mover, necessity has often forced him to take up a position in the slips where he has had some good catches and generally proved himself equal to the job.

Off the field, Higgs is full of quiet good humour and often enlivens the dressing room with a subtle quip or interjection in the many arguments that arise on cricket or any other topics. He lives in his native Kidsgrove, almost within sight of the Port Vale football ground, with his wife, Mary and two young sons, Pat, aged seven, and Terry, who is four. All three are ardent cricket fans and regular attenders at Old Trafford with Mary driving the car and Ken, who is not a driver, happy to spend as much time as possible with his two boys.