After breaking out on the international scene with 22 wickets in his first two Tests, Alec Bedser was named a Wisden Cricketer of the Year in 1947.

When finished with helping to crush the forces of evil which menaced the world, Alec Victor Bedser, the minor of the Surrey twin professionals, jumped to fame in cricket circles. One can scarcely write his biography without bringing in his brother, Eric Arthur, because until Hammond’s team sailed for Australia their lives were linked inseparably. Neither had been away from the other for more than a few days and both shared in the plan and development of anything either of them accomplished.

They were born on July 4, 1918, at Reading, where their father was stationed with the Royal Air Force, and within six months the family moved to Woking. Here they stayed, and to Woking must be given the credit for providing them with chances to take part in cricket and football. They remember playing their first organised cricket at the age of seven for All Saints’ Choir, Woodham, and they excelled at games for Monument Hill School and the Woking Cricket Club. Natural players, they received every encouragement from their father and mother, but the secret of their success was keenness and readiness to bat and bowl to each other which ensured constant practice.

At one time the law might have claimed them, for on leaving school they joined a firm of solicitors in Lincoln’s Inn, but fortunately for cricket they were spotted by Alan Peach, the Surrey coach, in the nets of a cricket school at Woking, and he soon introduced them to Oval officials. In 1938 the Bedsers became members of the Surrey staff and the following year they realised one of their ambitions when given two games in the first team.

In those days both were fast-medium bowlers; Alec a hard-hitting batsman and Eric a more cultured run-getter. But with so many seam bowlers at The Oval they reasoned that there would be little room for both of them; so Eric turned to off-spinners – otherwise, judging by the problems that perplexed the selectors in 1946, both might have opened the England bowling: but that is only surmise.

They were called up with the Militia and sent in September 1939 to the RAF police from which they moved to the investigation branch. In January 1940 they went to France, got away at Dunkirk and from 1943 served in North Africa, Italy and Austria. They were demobilised in May 1946, and that was the month when Alec established himself as a county cricketer; but people at Lord’s – particularly Sir Pelham Warner – had noted his gifts in the one-day war-time fixtures of 1943 against Australia, West Indies and the Dominions. In the West Indies match he took six wickets for 27, including the hat-trick, in eight overs; and he repeated the hat-trick that season in the course of taking nine wickets for 36 for the RAF against Metropolitan Police. 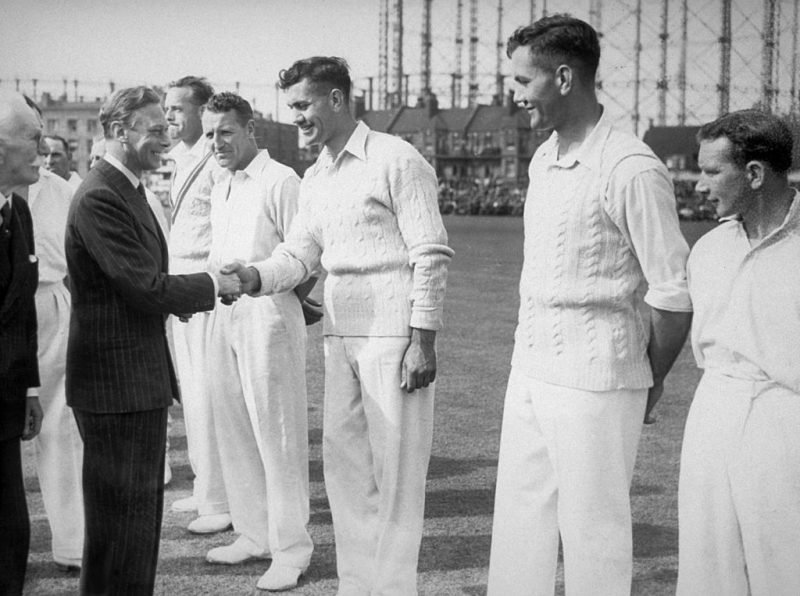 Still few people knew much about Alec Bedser until last summer when he stormed the cricket world with his magnificent bowling for England in the first two Tests against India, breaking all bowling records by taking 11 wickets in each match. Actually, Grimmett can claim a better first match appearance in two innings, for against England in 1924/25 his analysis was 11 wickets for 82 – five for 45 and six for 37. Bedser’s figures were seven for 49 and four for 90 at Lord’s; and four for 42 and seven for 54 at Manchester; so he accomplished the best bowling performance by anyone in his first innings of a Test debut. Before the end of July, Alec Bedser took his 100th wicket in his first county season and no one was surprised when his name came out among the first batch chosen for Australia.

The Bedsers are identical twins. You need acquaintance with them for a long time before you can tell them apart; each stands 6ft. 3in and weighs 15st. 4lb.; they write and dress similarly.

Many experts have compared Alec with Maurice Tate, whose style and action he closely resembles, but Alec says he never saw Tate in his prime and did not model himself on any bowler. For a pace bowler he takes a comparatively short run of eight paces and imparts all his energy at the moment of delivery.

Immensely strong, he can keep bowling for long spells and when at the top of his form he rarely sends down a loose ball. He uses the swerve very little, but turns the ball either way off the ground. A dependable fielder close to the wicket, his large hands usually grab anything within reasonable reach. While bowling is his first consideration, he is a useful batsmen late in the order and not without style, especially when hitting through the covers. He and his brother simply live for cricket and they are popular wherever they appear.

Alec Bedser continued to perform brilliantly for England in the immediate post-war years and became recognised as one of the all-time great medium-pace bowlers. In 51 Tests he took 236 wickets at 24.89.