John Snow was England’s main strike weapon in their 1970/71 Ashes triumph in Australia. His role in retaining the trophy in 1972 earned him a Wisden Cricketer of the Year award.

Man is born to trouble as the sparks fly upwards and John Augustine Snow, poet, thinker, introvert would surely be one of the last to disagree with the Old Arab proverb. Assaulted on the boundary edge of a great Test arena, dropped by his county for lack of effort, stood in a corner by England’s selectors for barging over an Indian Test batsman at Lord’s and while all this was swirling around him, writing and getting published a volume of poems – controversy, thy name was Snow, in the early 1970s.

Popular imagination likes its fast bowlers to be ale-swilling extroverts, but this enigmatic cricketer refuses to be typed. He owes his inclusion in one of the most coveted sections of this Almanack to none of these things. He is here on naked merit, which first played a major part in bringing the Ashes back home to England after an absence of 12 years and then helped keep them here last summer. A haul of 55 wickets in two series against Australia is his passport to cricket immortality.

It was perhaps inevitable that he should be regarded as difficult and have his brushes with the establishment, for Snow demands more of life than the game he has adorned with distinction at the highest level. At the England team’s Harrogate hotel during the fourth Test at Leeds last July, Basil D’Oliveira in an animated dinner-table conversation said to him “The ultimate thing in life is to play for England.” Snow replied quietly “The ultimate thing in life is death.”

He admits to being an inward-looking person but says: “I do not withdraw from other players off the field or regard myself as a loner.” Reading, music, painting, poetry are as necessary to him as food and fresh air. When it was put to him that he had a reputation of being a man of moods and that he projected an air of quiet menace to those who sit around the boundary edge and watch, he replied, “A man of moods? Yes, I suppose to a certain extent I am. The menacing bit surprises me though. I get fed up and down in the mouth some days, but if I give the impression of being in a bad temper it is more often than not with myself.”

His father, William Snow, entered the Church at the age of 24, before which he had been associated with the Scottish Football League club, Queen of the South, as a goalkeeper. He also played cricket in the Border League of Scotland. His ordination to a Scottish parish was followed by moves to Worcestershire and Sussex.

John was born at Peopleton, a village near Pershore in Worcestershire, on October 13, 1941. Here and in another Worcestershire rural community at Elmley Castle he grew up with three sisters. From the age of four, the Rev. William Snow had John playing cricket on the lawn with the serious intention of grooming him for first-class stardom.

The mental spectacle of mother and his three sisters being dragooned into service as fielders recalls the story of the Grace and Foster families in the previous century. It still can be done, the dream and back garden beginning blossoming into glorious reality.

From the time he could toddle, John was used to being called a pickle. He had an alarming penchant for falling into ponds. At two he was so fascinated by some goldfish that he overbalanced and went in head first. If his six-year-old sister Rosemary had not leant over and held on while screaming for mother, who was luckily near at hand, England would have been short of a genuine successor in the line of Trueman and Statham. 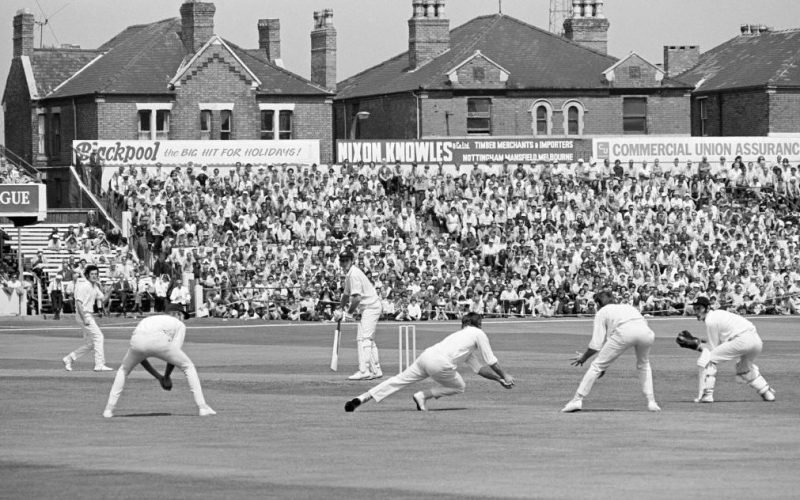 John Snow has Bob Massie caught by Peter Parfitt for a duck at Trent Bridge, circa 1972

At five while fishing he slipped and fell into another pond. This time a six-year-old companion managed to get his hook into a part of John’s clothing and haul him to the side – another unknown hero who rendered his country a signal service.

“It didn’t stop me running riot on my own,” Snow reflects. “As the only boy in the family I loved exploring the woods and countryside, but I mixed with the village boys and was in all their escapades. When I was seven my father took me to Worcester to see Bradman playing for the 1948 Australians. All I remember of it is white figures moving about.”

His father’s ministry next took him to Bognor Regis and for John that meant a place at Christ’s Hospital, Horsham – the famous Blue Coat school. He played full-back for the first XV in his last year there and was an all-rounder in the cricket XI in his last two years.

Less than eight years from the day John sent down his first fast ball for the school he bowled for England at Lord’s in 1965 against New Zealand. Five years later at Lord’s again he joined a select band of 18 bowlers who have taken 100 wickets or more for England.

Len Bates, once of Warwickshire, was coach at Christ’s Hospital and in persuading Snow to take up fast bowling when he was nearly 16 he was possibly the first man to see in John the great bowler rather than the star batsman his father had aimed for. Ironically Ken Suttle, who was to be his Sussex colleague for a decade, introduced him to the county as a promising batsman but a youngster whose bowling was not to be taken seriously “as he sprays it around like a garden hose.”

Snow, with that wry, dry, maturing humour says “I think as the Sussex No.11 I can be said to have shown him wrong in more ways than one.” In hard fact Snow is probably the best technically equipped tail-end batsman in major cricket. He made 35 not out in his second county game at Worthing (never batsmen’s pitches) in 1961. Then five years later came a never to be forgotten day at The Oval when he made 59 and helped Ken Higgs to put on 128 in a record last-wicket partnership for England against the West Indies. In 1969 he and Alan Ward were only one run short of the tenth-wicket record against New Zealand.

“A fast bowler who doesn’t get results has no future”

Snow has indeed figured in so many notable late stands in Test cricket, at Dacca, at Lord’s, at Trent Bridge and at Headingley, that he now surely merits being described as an all-rounder. Snow gives himself another two years of fast bowling and to the suggestion that he could be good enough to stay in the first-class game as a batsman he says quite soberly – “Well it’s a thought. I’ve certainly managed to lurk about a few times for other batsmen if not for myself.”

Academically he did not do as well as he wanted to at Christ’s Hospital, but a year’s concentration at Chichester High School enabled him to gain a place at the Teachers’ Training College at Culham near Abingdon. A three-year course studying geography and physical education as his main subjects with two winters’ practical work at Woodingdean qualified him as a teacher. Whether he will ever use that qualification only the future will show.

Since his own school days John’s life has centred around the varying degrees of Sussex cricket – the Young Amateurs, the Martlets, the Second XI and then the final struggle for first-team recognition. He made his debut against Glamorgan at the old Arms Park ground, Cardiff and his five wickets justified his selection. Snow’s first home game was against Leicestershire at Worthing and he hurled himself at the crease like someone possessed of a demon.

His pace was impressive but his line, length and direction were appalling and Maurice Hallam murdered him with a not-out century in each innings. Snow’s one wicket cost him 95 runs and it was back to the second team and some serious heart searching.

He quickly gave the lie to the whisperers who wanted to write him off as a sulky playboy and has been doing so off and on ever since. Under coaches like James Langridge, George Cox and Harry Parks he became in four years a capped player first for Sussex and then for England.

Of himself in his role of fast bowler, the teacher, writer, dilettante of the arts says “I’ve a streak of hardness but I wouldn’t call it meanness. The bouncer in my book is legitimate intimidation. If a batsman carpets me for four or hits me out of the ground he’s got to expect retribution and he should be able to handle it if he knows his technique. If he does not he’s no business to be there. A fast bowler who doesn’t get results has no future.”