While John Shepherd never got a long run in the West Indies Test side, he was a star performer for Kent. He was named a Wisden Cricketer of the Year in 1979.

As Kent cricket followers honour the West Indian all-rounder John Shepherd in his benefit year of 1979, against the usual background of career statistics, the question will doubtlessly be asked again: why did he play only five times for his country? With nearly 10,000 runs and 1,000 wickets to his credit, Shepherd has reigned comfortably as one of the most successful all-rounders in the world, so there is no ready answer. However, Kent have benefited considerably from the exclusive use of a man who steadfastly sought to prove, and succeeded, that he was an international cricketer of repute.

John Neil Shepherd was born on November 9, 1943, at Belleplaine, St Andrew, Barbados, where the younger of his two brothers, Robert, had played for the island’s youth team. Shepherd’s keen early interest in the game was heightened by the success of the three Ws – Weekes, Worrell, and Walcott. He adopted Everton Weekes as his number one idol, which explains why he has always sported a moustache.

At Alleyne’s School, Barbados, Shepherd was content to work just enough to win promotion. All he really wanted to do was play cricket. Batting has always been his favourite department. His first island trials were as an opening batsman and wicketkeeper. In 1961 he toured Jamaica with the Barbados Schoolboys, under the managership of Weekes and in company with another young international cricketer in the making, Keith Boyce, then a leg-spinner.

In 1964, Shepherd, now a fast bowler, and Boyce moved to the Maple Club – to play a higher standard of cricket – and in 1964/65 they played together for Barbados ‘B’ against the International Cavaliers. It was a match which changed the course of their careers. The Cavaliers were led by Colin Cowdrey, then the Kent captain, and included Essex’s Trevor Bailey. Essex moved quickly to acquire Boyce, also a pace bowler by this time, and Kent signed on Shepherd, who travelled to England in April 1965, just a fortnight after Boyce. During two seasons of qualification in the second eleven, he became acclimatised to the different conditions, bowling off a shorter run at medium pace and concentrating on moving the ball.

In his first full season in 1967 he was awarded his county cap, and returning home in the winter he nearly played for West Indies before he had represented Barbados. On New Year’s Day, however, playing for Barbados ‘B’ against the MCC, he sustained a fractured cheekbone trying to hook David Brown. That injury put him out of contention for the first Test and ultimately for the series.

The following winter he played for Barbados and in 1969 – by now a talented all-rounder – he toured England with the West Indies in the first half of the season. His greatest ambition was realised when he played against England in the first Test at Old Trafford, bowling 58.5 overs in the first innings to finish with five for 104. He bowled 43 overs, taking three for 74, in the second Test at Lord’s during which he developed back trouble. It was suggested that the injury was possibly caused because he had been over-bowled in the first Test, but Shepherd does not subscribe to that theory.

“I think there was a case for me bowling as much as I did because I was ideally equipped for the conditions. I feel it was a freak accident that caused the injury at Lord’s. I slipped, and it felt as though a nerve had been pinched at the base of my back. It was left to me to decide my fitness, and although I was not completely happy I played in the third Test at Leeds and broke down. So I take full responsibility for what occurred.”

Shepherd played very little for the rest of the season but reappeared for West Indies in two Tests back home that winter. That proved to be the end of his Test career, which both angered and disappointed him. His argument that nobody else had stood out head and shoulders above him was valid – and Gary Sobers was then the only recognised West Indian all-rounder.

In 1973 Shepherd went with Derrick Robins’ side to South Africa, becoming the first black cricketer to tour there. “It was,” he says, “a very challenging tour for that reason alone. I enjoyed it immensely and had a very successful time. Indeed, I’m probably more respected there as a cricketer than I am in the West Indies, which is a terrible thing to have to say.”

In the winter of 1975/76 he played for Rhodesia in the Currie Cup. Knowing that he would never play for his country again he was determined to remain an international cricketer and accepted overseas tours and commitments. That philosophy took him to Australia the next winter to play grade cricket in Melbourne – he was Cricketer of the Year there – and he returned the following winter to captain his club, Footscray. 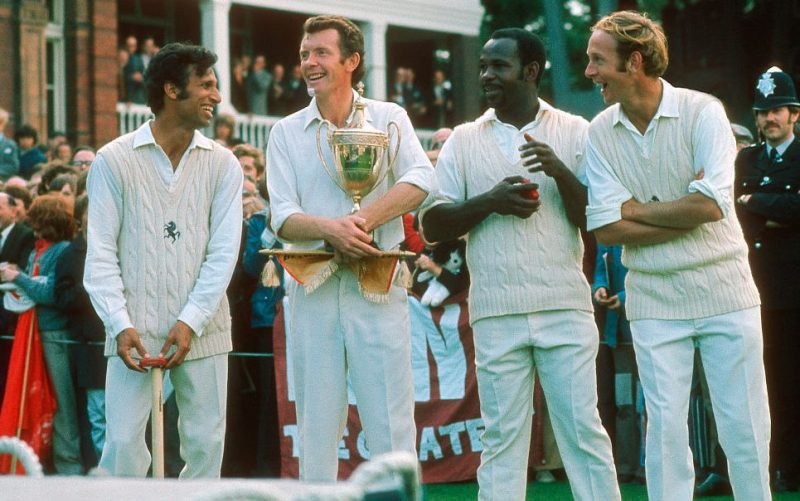 In his first full season in the Kent side they won the Gillette Cup, and he and his adopted county have enjoyed an almost continual success story ever since. He is grateful for the welcome he had on his arrival in Kent and for the respect and popularity he has always enjoyed. In his early seasons he was particularly thankful for the support he received from Leslie Ames and Colin Cowdrey, from Colin Page, then the second eleven captain, and from Mike Denness and his wife Molly, who took him into their home for the first couple of years and made him part of their family.

Gradually he put down his own roots and he says: “I’ve never thought of myself as an overseas cricketer, just a member of the Kent team. I like to think that I play the game as the former amateurs did. I’m there to entertain people and that’s my first priority. If I play in the cavalier spirit I don’t see why anyone should grumble.”

Former Kent and England captain Colin Cowdrey said: “He’s a superlative all-round cricketer who should have played very much more Test cricket than he did.”

Leslie Ames said: “With his batting, bowling, and brilliant fielding he is undoubtedly the best all-rounder Kent have had since the war – and, with the exception of the legendary Frank Woolley, the best since the First World War. He’s been a marvellous servant to Kent and I’ve been impressed with his tremendous unselfishness. He has always put the side before himself.”

Significantly Ames has emerged from retirement to be chairman of Shepherd’s benefit committee. Kent cricket followers will surely welcome the chance of rewarding Shepherd for his distinguishing service to their county.