Jack Bond was the captain and tactical mastermind behind Lancashire’s run of one-day trophies in the early Seventies. His Wisden obituary in the 2020 almanack remembered an inspiring leader.

In February 1968, Lancashire were in turmoil. Still without a captain after Brian Statham’s resignation the previous summer, they had approached Garry Sobers, who signed instead for Nottinghamshire. Another candidate, A.C. Smith, chose to stay with Warwickshire. Lancashire turned to a former captain, Bob Barber, who had left in 1962. He told them the right man was already on the staff: Jack Bond, despite soon turning 36, and being unsure of his place. “They asked me on a caretaker basis,” said Bond. “There was no long-term job being offered.”

The appointment marked a turning point in Lancashire’s history. Bond became one of the club’s greatest captains, leading them to five one-day titles in four years, and dramatically improving their fortunes in the Championship. At 5ft 6in, he was not a commanding figure, and his batting was modest, but he was a shrewd tactician and a canny man-manager. “He was,” said Farokh Engineer, “the best captain I ever played under.”

His elevation was perfectly timed. A group of young cricketers, untainted by failure, were being blooded, and Clive Lloyd arrived as a second overseas player, a year after Engineer. Bond was initially pragmatic. “The first thing he did was ensure we did not lose so often,” said David Lloyd. “He wanted us to get out of the habit.” After years of dressing-room rancour and dwindling support, Bond also hit on a winning formula in one-day cricket, bringing trophies and capacity crowds to Old Trafford.

The son of cotton-mill workers in Bolton, he had made his debut in 1955, having developed his game in the leagues, before a newspaper talent-spotting contest brought him to Lancashire’s attention. His first game was against Surrey at Old Trafford, where Tony Lock dismissed him for nought and one. “If poor young Bond had ever wondered what first-class cricket was about, he was to learn a great deal in an unpleasantly short time,” wrote Denys Rowbotham in The Manchester Guardian. Under the captaincy of the haughty Cyril Washbrook, it was not an easy time for a raw recruit. “There was quite a lot of professional jealousy,” Bond recalled. “You didn’t really have any friends.”

Progress was slow. He did not score a century until 1959, or become a regular until 1961. But in 1962, when he was selected for MCC against the champion county, his sound, unspectacular technique earned him 2,125 runs at 36, including five hundreds. Early the following summer, however, Wes Hall broke his wrist during Lancashire’s match against the West Indians. Bond attempted a comeback too quickly, and struggled to recapture his form: in five seasons, his best aggregate was 743. By the late 1960s, he was in and out of the team, fretting about his contract.

Jack Bond in action against Surrey at the Oval, June 1958

It was a bleak decade at Old Trafford. Lancashire finished in the bottom half of the table seven years in a row, and changed captain frequently: Barber (two seasons) was followed by Joe Blackledge (one) and Ken Grieves (two). An advertisement in The Times failed to produce a suitable candidate, and a reluctant Statham took on the job for three summers. Bond had enjoyed some success captaining the Second XI and, on his promotion in 1968, demanded hard work, loyalty and fitness. He also asked his team to perform with zest, and win over a disillusioned membership: “If you enjoy playing, the public will enjoy watching you.”

Lancashire rose to sixth in the Championship, and Bond set a selfless example. At Northampton in July, he declared seven short of his first century for three years, allowing Ken Higgs and Ken Shuttleworth a half-hour burst with the new ball; next day, Lancashire completed a ten-wicket win. In 1969, Bond led them to the John Player’s County League title, in the competition’s first summer. Some considered the 40-over Sunday-afternoon matches a gimmick, but Bond’s young team – schooled in Saturday league cricket – attacked them with gusto. Fielding standards rocketed. “He told us, ‘If your whites are not dirty when you come back in, I want to know why,’” said spinner Jack Simmons.

They retained the title in 1970, added the Gillette Cup by beating Sussex at Lord’s, and finished third in the Championship. He had been a founder member of the Professional Cricketers’ Association in 1967, and shared their first Player of the Year award with Mike Procter in 1970. Bond was named a Wisden Cricketer of the Year in 1971 aged 38, and that summer hit the winning run in the celebrated Gillette Cup semi-final against Gloucestershire in the Old Trafford gloom. The final against Kent was an epic, bringing together the best two one-day sides. Asif Iqbal looked set to carry Kent to victory, but Bond turned the match with a leaping, one-handed grab at extra cover. “You can’t possibly see a better catch than that in a final,” exclaimed Jim Laker on TV. “Bondy was fantastic,” said fast bowler Peter Lever. “Once we had one trophy, there was no stopping us.”

Bond’s leadership style was quiet but firm. “He was a father figure to all of us,” said David Lloyd. “We loved to play for him. If he pulled you over and told you off, you hung your head a bit: it was like letting your parents down.” A devout Methodist – though he enjoyed a drink – he went to church before every Sunday League fixture. If there was no Methodist church nearby, he was happy to attend another denomination, and sang hymns with a vim that belied his diminutive frame. The organ at his home church in Bolton was often played by the Blackpool and England footballer Jimmy Armfield. 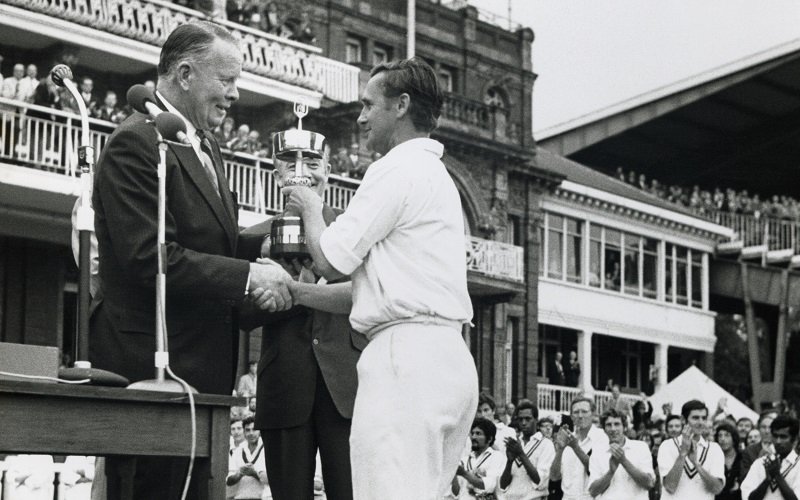 His one-day formula was simple, but ahead of its time. “He always wanted us to have wickets in hand to go for broke in the last ten overs,” said Lloyd. “When we were bowling, it was pace up front, then he’d want the spinners, Jack Simmons and David Hughes, to squeeze the opposition in the middle overs.” Two fleet-footed runners were deployed on either side of the wicket. “We were the first team to go in for sliding stops, and diving to prevent boundaries,” said Lever. A dazzling Clive Lloyd century illuminated the 1972 Gillette Cup final against Warwickshire, when Lancashire completed a hat-trick. Their vociferous support had helped turn Lord’s finals into something akin to big football matches, but the fans recognised Bond’s understated qualities. “Jack for PM,” read one banner.

Now aged 40, he retired to a coaching role, although he was enticed back to lead Nottinghamshire in 1974, with modest results. He was an England selector that summer, then moved to the Isle of Man to become coach and groundsman at King William’s College. In 1979, Bond returned to Old Trafford as manager. Lancashire won the Benson and Hedges Cup in 1984 but, after a wretched season in 1986, he was summoned to a meeting with chairman Cedric Rhoades. “I’m sorry, I think it’s time to call it a day,” said Rhoades. Bond replied: “I don’t really think so, chairman. I think you’re doing a grand job.” “Not me,” said Rhoades. “I mean thee.”

Bond joined the first-class umpires list in 1988, and remained on it until 1997. His commitment to Lancashire never waned, and he turned up to help the groundstaff until a hip operation in 2014. At his funeral, his coffin was carried by former team-mates Barry Wood, David Lloyd, Simmons and Hughes, plus Mike Atherton and Warren Hegg, two of his last signings as manager. They entered the Methodist church in Walkden, Stafford, to the team’s 1972 cup-final song, “We Will Always Stick Together”. The service was conducted by the club historian, the Rev. Malcolm Lorimer. “I can think of no other Lancashire player,” he said, “who was held in such high esteem by his fellow players, which is remarkable because there were greater batsmen and bowlers – but no greater man.”