Clive Lloyd played a huge part in transforming the fortunes of Lancashire in the early 1970s after arriving as an overseas player. He was a Wisden Cricketer of the Year in 1971.

Few cricketers in recent years have captured the public imagination in the manner of Clive Hubert Lloyd. This tall, bespectacled all-rounder, short-sighted but by no means handicapped by the affliction, joined Lancashire two years ago and has played a leading part in the revival of cricket at Old Trafford where crowds are now big again and enthusiasm is ever growing.

Born in Georgetown, British Guiana, on August 31, 1944, and christened Clive, Lloyd would be the last to proclaim that his signing from the Lancashire League club, Haslingden, had anything more than a passing significance. He would, of course, be wrong. No cricketer has made a greater impact on his county than has Lloyd on Lancashire. He has set an example with the bat, the ball, and in the field, that has inspired every other member of the team and the staff at Old Trafford to strive for similar perfection.

The Lancashire captain, Jack Bond, is ever ready to pay tribute and says: “the very fact of playing alongside Clive has been an inspiration. No fieldsman prowls the covers with greater menace; no man throws with more power or accuracy. With the bat few hit either so hard or so often, and with the ball Lloyd is always likely to break a partnership or snatch a valuable wicket. His value to Lancashire cannot be measured by ordinary standards.”

Lloyd is a cricketer who does things by instinct. He learned the game – as so many West Indies cricketers do – in the streets and backyards of his native Georgetown with the help of his one brother and four sisters who were roped in to help retrieve the many balls Clive dispatched into other backyards and streets farther afield.

A man of some 6ft 5in with a reach that enables him to dictate a length to every bowler, Lloyd won a place in the Demerara School team as a ten-year-old and at once made it apparent that here was a boy with tremendous cricketing potential. He had a natural ability to hit hard and bowl either fast, medium or slow. He would spin the ball from the start and took a lot of wickets as a right-handed leg-spinner who batted left-handed and fielded so brilliantly that stealing or even taking a reasonable run to him became a hazardous risk. It has remained so. 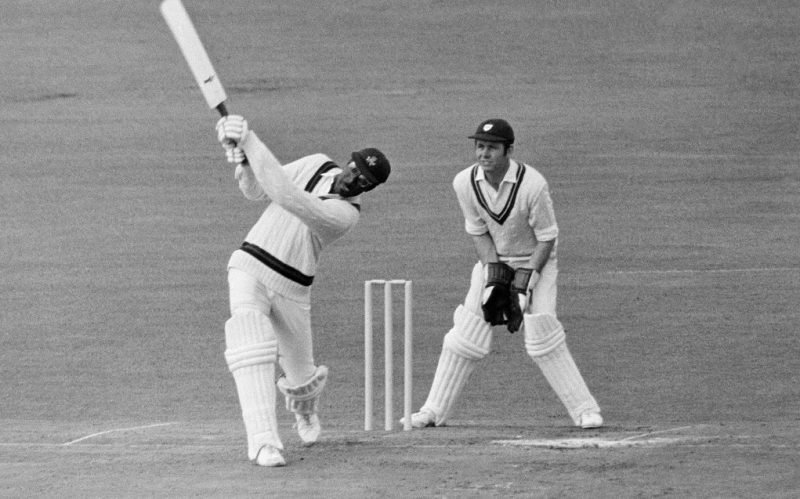 Lloyd harnesses his ability to cover a deal of ground with his long, loping stride, with a tremendous reach and a powerful throw. His hands are big enough to make catches a formality. Little escapes him in the air or on the ground and he does it all with the casual ease of a man born to thrill the cricketing crowds all over the world.

It was a natural step from the school team to the Guyana Colts and then the State team for the talented Lloyd. He was earmarked for the highest honours and after making his first-class debut with Guyana in 1963/64 he was blooded in Test cricket in India in 1966/67, making a century against England at Port of Spain and also hitting 129 on his Australian debut at Brisbane a year later. He was ambitious as well as talented and when Wes Hall suggested to Lloyd that he would benefit from a spell in league cricket in Lancashire it was an easy task to find him a club.

Haslingden signed him in readiness for the 1967 season and Lloyd modestly says: “I came to England because I thought it would improve my batting technique.” Within weeks of the opening of the season he had impressed both with the bat, in the field, and as a bowler, although he found that league requirements called for a switch from spin to medium-pace seamers. He made the change effectively as well as quickly. Runs and wickets came his way readily in the Lancashire League and he agreed to stay with Haslingden between touring Australia, New Zealand, India and Ceylon with West Indies teams.

Lancashire, out-priced in their bid for Sobers, turned their attention to Lloyd when the new overseas registration rule came into being and because he had settled down so well and got to know the people of Lancashire at Haslingden, he signed for the county and has no regrets. “They are a great bunch of fellows and Jack Bond is a captain in a million,” says a happy and contented cricketer who is known as Hubert in the dressing-room and accepts praise and criticism with equal willingness.

Lloyd pays tribute to several famous West Indies players who helped him on his way to the top. Berkeley Gaskin and Fred Wills were two who encouraged him as a youth and since he made the grade none have made a greater impact upon him than the late Sir Frank Worrell, Walcott, Sobers and Hall. He classes Graveney and Cowdrey top as far as English cricketers go, and also pays tribute to Barlow and Lawry. Lloyd rates Bridgetown in Barbados as his favourite ground, but also nominates Trent Bridge, Edgbaston and Melbourne as other cricketing venues that have delighted him.

At one time Clive enjoyed a game of soccer but now he is content to watch, but he keeps fit between cricketing missions by playing squash, lawn tennis and table tennis. He is an ardent cinema-goer and a lover of the Calypso style of music on which he was brought up.

He still has one or two cricketing ambitions to fulfill. He would like, eventually, to captain the West Indies and to be a member of a Lancashire side that wins the County Championship. Neither of these targets are beyond his realisation, for at 26 Clive Lloyd still has the cricketing world at his feet.

Averages mean little to him. He reads now and again that he needs so many runs for a special target or so many catches to create a new record but these things never worry him. A career record of over 6,000 first-class runs means nothing to him as yet. His selection for all five Rest of the World matches against England last summer pleased him immensely but caused him to reflect that he had to miss several Lancashire games to do so.

It is not of great importance to Lloyd for whom or where he plays his cricket. It is how he plays that matters most and although well aware of his great pulling power with the crowds he modestly insists that they come to see the team and not him alone. When asked what was the secret of his great cricketing ability, Lloyd said in his lazy West Indian drawl: “If ah can see the ball, ah can hit it.” And that ideally sums up a perfect cricketer and a likeable fellow –a player who likes nothing better than to be classed as one of the boys.

Clive Lloyd fulfilled his stated ambition to captain West Indies, taking over in 1974, and leading one of the greatest teams in history. He played in 110 Tests, making 7,515 runs at 46.67.