Hugh Tayfield was South Africa’s key performer during their impressive run in Test cricket the early 1950s. He was named a Wisden Cricketer of the Year in 1956.

In the renaissance of South African cricket since 1951, no role had been more vital, nor more successfully accomplished, than that of Hugh Joseph Tayfield. To the dark, slimly-built Natal off-break bowler fell the task of shouldering, almost single-handed, the burden formerly shared by those two great spin bowlers, AMB Rowan and the late NBF Mann.

Figures tell eloquently of the splendid manner in which Tayfield responded to that call and the great part he has played in one of the most glorious chapters in South Africa’s cricket history. In the 17 Tests played by South Africa from 1952 to the end of the 1955 tour of England, JE Cheetham’s spin bowlers accounted for 109 batsmen. Of these, no fewer than 87 fell to the guileful, tenacious Tayfield, an average of four out of every five. His place in the annals of the game became assured when, by dismissing TW Graveney in the fifth Test at Kennington Oval last summer, Tayfield claimed his hundredth Test victim. This honour eluded even such famous Springboks as CL Vincent (84) and GA Faulkner (82), both of whom appeared in twenty-five Tests compared with Tayfield’s twenty-two.

Cricket was in Tayfield’s blood when he was born in Durban on January 30, 1929. His uncle, SH Martin, played for Worcestershire with considerable success as an all-rounder in the 1930’s and later helped to develop his nephew’s cricket as a fellow-member of the Natal and Rhodesia sides.

Tayfield’s father was also a keen cricketer in his youth and remains among the most demanding critics of Hugh and his younger brother, Arthur and Cyril, both of whom now play for their adopted province of Transvaal.

As a boy, Hugh bowled out of back of his hand and though his batting and fielding were sufficient to keep him in the Durban High School XI his opportunities with the ball were limited. The turning-point in Tayfield’s career occurred when the school captain, also a leg-break bowler, suggested that Tayfield should try his hand at off-breaks. At his first attempt Hugh took two or three good wickets and promptly resolved to concentrate on his new-found art.

Tayfield cannot recall being coached or modelling his technique on that of any other bowler, but he progressed so rapidly that soon after his seventeenth birthday he made his first-class debut for Natal. The following season, 1946/47, he helped Natal to win the revived Currie Cup competition and attracted special attention by taking six for 27 and six for 46 in friendly matches against Rhodesia and Transvaal respectively.

For the next two years Tayfield was lost to Natal through Army service in Rhodesia, where he joined Martin and another former Worcestershire player, AP Singleton, in the provincial side. With them he gained his first taste of international cricket against FG Mann’s 1948/49 MCC team and, though he took only two wickets in the two games, bowled well enough to persuade several English players that they had met a worthy successor to Rowan, then acknowledged as the world’s best off-spin bowler.

The following season Rowan broke down with knee trouble a fortnight before the first Test against Australia and Tayfield, back with Natal, replaced him in all five Tests. The first two brought him only five wickets for 234 runs but in the third, on his home ground at Kingsmead, Durban, he became a national hero. Australia, trapped on a sticky dog, were shot out for 75 – their lowest score against South Africa – and Tayfield’s analysis read 8.4-1-23-7. Even that performance was not enough to bring about Australia’s first post-war defeat, but it established Tayfield as a bowler of Test class.

He finished the series as South Africa’s leading wicket-taker with seventeen. Then just as he seemed to be launched securely on his Test career, came a period of setbacks. In the winter of 1950, he damaged his right shoulder playing Rugby football for Durban High School Old Boys. Treatment by a Durban osteopath, Mr Walley, dispelled fears that Tayfield’s bowling might be affected, but the injury left him unable to play tennis or squash, two of his favourite recreations.

A bigger disappointment followed when he was omitted from the team to tour England under AD Nourse in 1951. Rowan, fit again, was preferred and the Selectors decided against choosing two bowlers of similar style. A few weeks after the tour began, however, they reversed this policy in order to ease the strain on Rowan and Tayfield flew to England. He arrived with high hopes but, with Rowan remaining fit, Tayfield alone of the party did not find a place in any of the Tests, and in all first-class games he took only twenty-nine wickets at an average cost of 36.55 each. 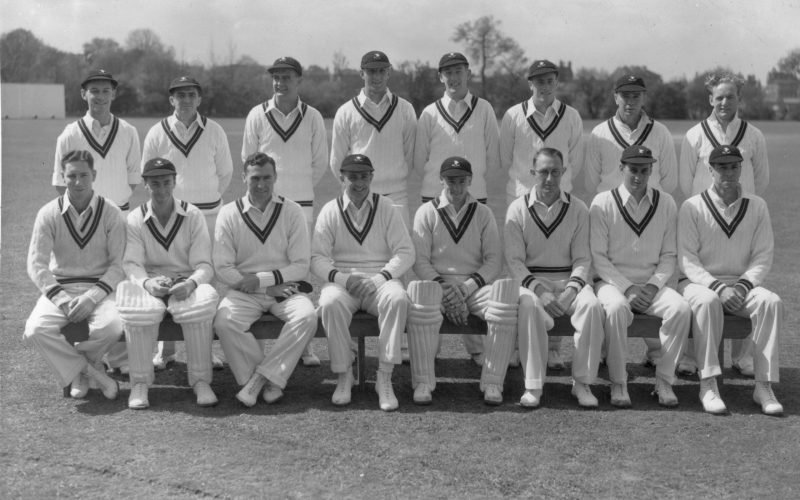 The South African team at the Union-castle Sports Association ground at Blackheath, London, May 1955

He returned home, however, a much-improved bowler and with the retirement of Rowan had no serious challenger to his place in the side chosen for the memorable tour of Australia in 1952/53. South Africa suprised the cricket-world by drawing the rubber and Tayfield equalled AV Bedser’s two-year-old record of thirty wickets in an Australian series. With thirteen in the second Test at Melbourne he beat all previous performances for South Africa and his seventy wickets in all games established a new record for a touring bowler in Australia. From Australia, where he met the girl who was to become his wife, Tayfield went on to further success in New Zealand and the following season he helped to overwhelm the New Zealanders in South Africa.

And so Tayfield came to England again last year, not this time as a late reserve but with the reputation of being the best bowler of his type in the world. Revelling in the sunshine and firm pitches, he promptly erased the memory of his failures four years earlier. Although he did not appear to spin the ball as viciously as Rowan in his prime, his control of length and flight was superb. Many eyebrows were raised at his field-placing–two men almost shoulder to shoulder about fifteen yards from the bat at mid-on and a vast, inviting space between mid-off and extra cover.

Tayfield, a keen student of tactics, reasoned that by tempting batsmen to hit against the break he stood a good chance of getting them caught in one of the mid-on positions. Moreover, he claimed that strong on-side players like MC Cowdrey and PBH May could be tied down by these fielders and that others were likely to come to grief through trying to hit over the heads of the twin sentinels.

These arguments did not satisfy all Tayfield’s critics but none could deny his success. Though troubled by strain and loss of sleep towards the end of the tour, he rose to Cheetham’s heavy demands magnificently, bowling 1,170 overs and taking 143 wickets in all games. In the Tests he was mastered only at Lord’s. He bowled South Africa to victory at Leeds and nearly did so again in the vital struggle at The Oval.

Tayfield insists on giving much of the credit for his achievements to the splendid support he has received in the field, both for South Africa and Natal. While undoubtedly true, this is no more that his deserts for he is himself a brilliant fielder, either to his own bowling or in any of the close positions. As a batsman Tayfield was not seen at his best in 1955, but he has many fine innings to his credit, notably one of 75 against Australia when runs were badly needed.

Apart from these talents, Tayfield has contrived to remain a personality in a side which has submerged individuality to a remarkable degree in the common cause. None has submitted more cheerfully nor more loyally to the discipline imposed by JE Cheetham and KG Viljoen, but he belongs to the breed of cricketers who compel the interest of spectators. His habit of kissing his cap for luck at the start of each over has been criticised as ostentation, but it is characteristic of Tayfield that he should remain quite unmoved in his determination to continue the ritual. It began during the triumphant Melbourne Test of 1952/53. Australia were 84 for no wicket when Tayfield kissed his cap in desperation. Immediately AR Morris gave a return catch and the habit was born.

Tayfield has no explanation, however, for the other mannerism that led the Australians to christen him Toey at the outset of his Test career. Whether preparing to wheel into his brief, lopsided run or waiting for the next ball to be bowled to him while batting, he taps the toe of each boot firmly on the ground two or three times. Yet such is his intense concentration that he is hardly aware of doing so.