Glen Chapple, a Lancashire great, led the county to a long-awaited County Championship title in 2011. He was named a Wisden Cricketer of the Year the following spring.

Lancashire had been through 22 captains since they last won the County Championship outright, under Peter Eckersley in 1934. Glen Chapple had played under seven – excluding occasional skippers, such as Mike Atherton – since making his first-class debut, aged 18, in 1992. He had never expected the captaincy, never coveted it, never even led a junior team. But in his third season after being appointed in October 2008, in the absence of any obvious alternatives to succeed Stuart Law, the generously freckled, ginger-haired Chapple became Lancashire’s fifth Championship-winning captain – following Eckersley, Leonard Green, Archie MacLaren and AN Hornby (Nigel Howard was in charge when they shared the title with Surrey in 1950).

He led from the front, with 57 first-class wickets at 19.75 – statistically the best of his 20 summers. On the last morning of the season, at Taunton, he became only the 16th bowler to take 800 first-class wickets for Lancashire. And at Aigburth in May, in the Roses Match, he had become only the fifth Lancashire all-rounder to achieve the double of 7,000 runs and 700 wickets.

But statistics cannot do justice to Chapple’s summer. The backstory to that 800th wicket was typical. After striking in his fourth over of a match Lancashire needed to win to stand a realistic chance of the title, he broke down in his fifth with a sharp pain in his right hamstring. Thinking he had torn it, he returned with heavy strapping for a second spell, in which he took a second wicket, but – fearing the worst – sat out most of the rest of Somerset’s first innings.

“I went through pain on the second and third days when I was hobbling,” he says. “But on the fourth morning, the treatment our physio had given me – a couple of painkillers, the strapping, all of it – just seemed to take the stress off it a bit. Without the strapping, I still couldn’t run. I was really fortunate to get back up to anywhere near full tilt.”

Somerset resumed on that final morning five wickets down, and Chapple quickly made it seven, generating sufficient pace and hostility to tick off Nos 799 and 800 in a spell that Atherton, there for The Times, reckoned was as lively as any he had seen from his former team-mate for over a decade. But as Somerset’s lower order held them up, the captain and his team endured another of the knife-edge passages of play that had characterised their season.

“I was standing there thinking: ‘It’s gone, nothing’s happening, there’s nothing in the pitch’,” Chapple recalls. “Then Gary Keedy threw the stumps down from backward point, and I thought: ‘We’ve won!’ Then I realised we still needed 200-odd, and changed my mind again. It was only when we needed ten off about eight that I accepted we’d done it.”

Glenn Chapple was a fitting leader of a mostly home-grown Lancashire team, though he was born – on January 23, 1974 – across the Yorkshire border in a Skipton hospital, the nearest available. Technically, his family home, in Earby, was Yorkshire property anyway, but it all came right in the end when, ten weeks later, the town was transferred from the West Riding to Lancashire, thanks to the 1972 Local Government Reform Act. His father, Mike, a fine cricketer in the Lancashire League, attracted interest from Yorkshire until they discovered he was born in Colne and therefore ineligible. He taught Glen “how to bowl, how to swing the ball – he’d bowl at me for two hours every night, at proper men’s pace”. Chapple was in the Lancashire system by the age of 12, and left for a tour of New Zealand with England Under-19s (then known as England Young Cricketers) just before his 17th birthday.

His county debut came in July 1992 at Hove, he took his first wickets at Edgbaston the following month and, the season before he received his county cap in 1994, he hit a century in 21 minutes against Glamorgan’s declaration bowlers at Old Trafford. Smooth progress continued on a successful England A tour of India, and he began the 1996 season widely tipped for a senior call-up. But that summer he was hampered by niggling injuries and, although it ended with a stunning spell of six for 18 at Lord’s to secure the match award in Lancashire’s NatWest Trophy rout of Essex, that was enough only to earn another A-team tour, this time to Australia.

Chapple made the squad for the Trent Bridge Test against South Africa in 2003, not one of his better seasons, but ended up rushing to join Lancashire at Hove when he was omitted from the eleven. He did take the field for England three years later, in a one-day game against Ireland in Belfast. But in his fourth over he “felt something tugging”. He was ruled out of the rest of the match and the one-day series against Sri Lanka, which England lost 5-0. “Unless I’m kidding myself, I don’t think I would have changed the course of that series,” he grins. “It was nice to get the sweater, but I don’t know if a handful of England matches would have mattered to me. Anyway, I’m not sure what else I could have done – perhaps be a bit better sooner. I probably took a couple of years longer than I needed to before I was the finished product.” 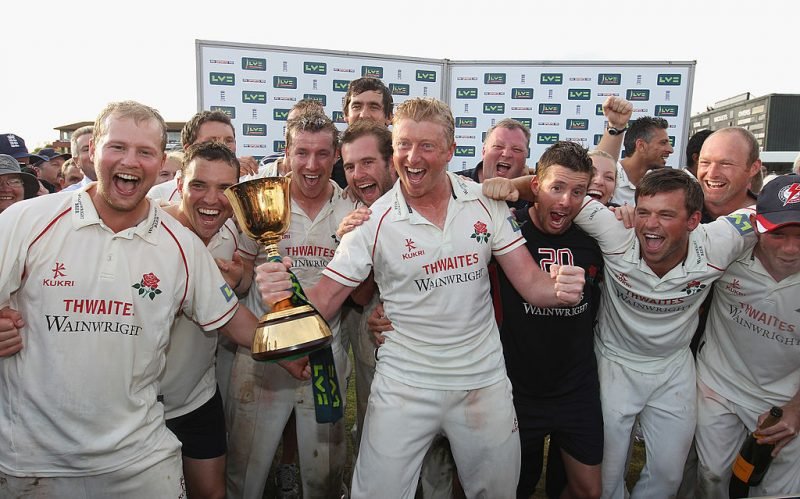 He has been that for a few years now, “a master practitioner” according to his county coach Peter Moores. The club’s academy director John Stanworth relates that young batsmen usually emerge from a net facing Chapple “shaking their heads about what he’s got the ball to do, and how comprehensively he’s worked them over”.

In the back of his mind he has a target of 1,000 first-class wickets, which would be remarkable for a seamer who has played mostly four-day cricket, much of it on flat Old Trafford pitches. He has also found captaincy more comfortable and enjoyable than he had imagined, especially in partnership with Moores. “The one thing I do all right is let them get on with it,” he says.

Now, he is guaranteed a place in Lancashire history. “Even I wasn’t aware of how big it was going to be in the county,” he admits. “People coming up to you, pumping their fist at you in the supermarket or down the high street, or just wanting to talk about it. A lot of people have been affected by it, and they’re really chuffed. For me it’s a bit like ‘Was it us?’ So has it sunk in? I don’t know if it ever will.”