After several years of unfulfilled promise, Geoff Pullar burst on to the scene in the summer of 1959, scoring heavily for Lancashire and making his Test debut. It earned him a Wisden Cricketer of the Year award.

Lancashire cricket followers, discerning and by no means the easiest of people to please, consider that in Geoffrey Pullar, the county has found a left-handed batsman worthy to rank with those two great Lancastrian left-handers of the past, Charlie Hallows and Eddie Paynter.

And indeed, in 1959, Pullar, highly promising for several years, blossomed into his cricket maturity in a splendidly successful season. Standing 6ft and weighing 13st, he combined much of the charm and artistry of Hallows with, at times, the pugnacity and determination characteristic of Paynter.

After his debut for Lancashire in 1954, at the age of 18, Pullar did not command a regular place until 1956. In each of the two following summers, he exceeded 1,000 runs and showed clear glimpses of future brilliance, albeit with lapses both in batting and fielding.

During 1958 his captain and mentor, Cyril Washbrook, sent Pullar back north after a bad match against Surrey at The Oval, considering that a spell of second-team duty would do him good. Pullar redoubled his efforts, improved his fielding greatly, and when he returned to the side, promptly hit two centuries.

His new-found determination and concentration was quickly apparent when the 1959 season began. Batting at No.3, he exceeded 50 in each of his first seven innings, including two hundreds, and that remarkable consistency stayed with him throughout the sunny summer. 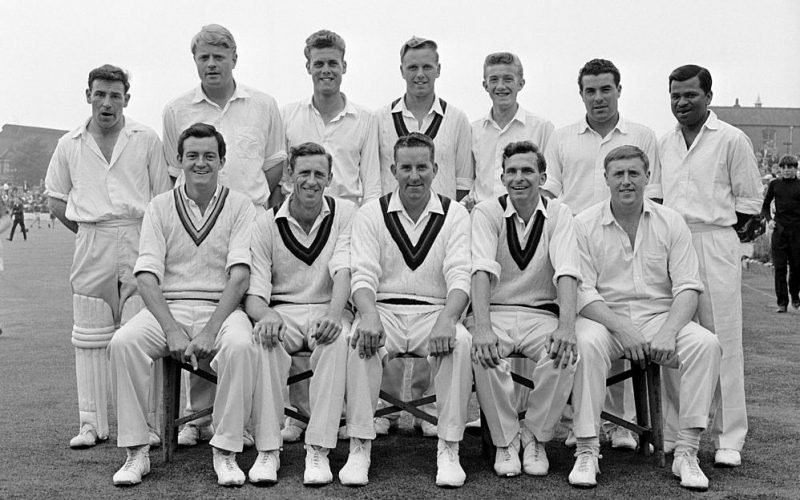 The Lancashire county team, circa May 1964. Geoff Pullar is seated first from left

By the time the season ended, Pullar had scored 2,657 runs at an average of 55.14, hit eight centuries and made seventeen other scores exceeding 50. Only M.J.K. Smith and Barrington finished with a higher average. Moreover, a mid-season change to opening to solve a pressing problem for England in no way impaired his prolific scoring, and by determined application he greatly improved his work in the outfield.

England’s selectors, in fact, were first to utilise Pullar’s correct technique and concentration in the role of an opening batsman. His first cap came in the third Test against India at Leeds, and he hit 75 soundly in a three-figure opening stand with Parkhouse of Glamorgan.

In the fourth Test he accomplished a feat never previously credited to a Lancastrian by hitting a century for England at Old Trafford. His score was 131, and it followed 137 on the same ground at the expense of the Indian bowling in the Lancashire match at the end of June. Pullar, now established as an England opening batsman, and also successful in a left-handed opening combination with Wharton for his county, was almost an automatic choice for the MCC tour to West Indies.

Pullar’s successes against the old enemy, Yorkshire, probably gave most pleasure to his fellow-Lancastrians in 1959

Yet for all his Test honours, Pullar’s successes against the old enemy, Yorkshire, probably gave most pleasure to his fellow-Lancastrians in 1959. He hit three hundreds off Yorkshire in their Championship year, one in each of the Roses matches at Whitsun and August Bank Holiday, and another for the Rest against the Champion County at The Oval. The last of these came before lunch on the first day, and in it Pullar showed aggression and nimble footwork in going down the wicket to fast and slow bowling alike, which surprised even his most devoted admirers. The Cricket Writers’ Club acclaimed Pullar the outstanding young cricketer of 1959.

Pullar possesses an upright and very easy stance at the wicket; he excels in forward play, making full use of his height and reach, which enable him to drive with elegant power, particularly to the off. His back play in defence is a model of studied correctness, and he pulls and glances with the typical certainty of the left-hander. He has little tendency to the left-hander’s besetting sin, the flash outside the off-stump, but can square cut forcefully. 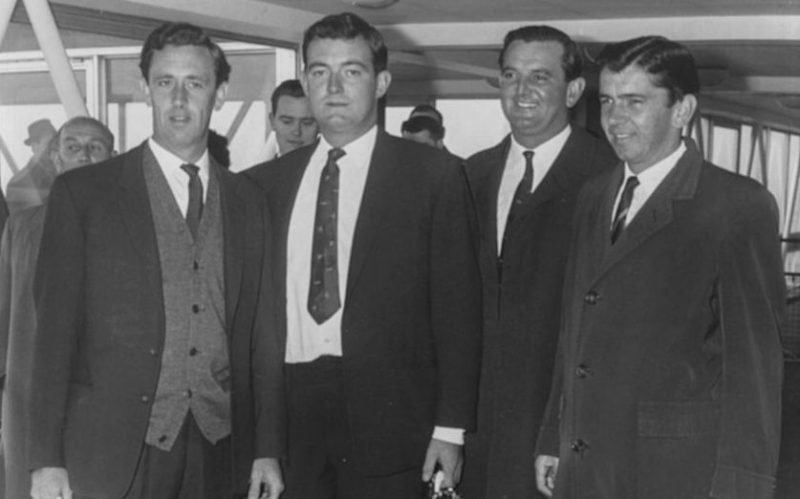 Born at Swinton, near Manchester, on August 1, 1935, Pullar soon moved to Oldham with his parents, and there he developed his love of cricket, becoming a member of the Lancashire schools team, and a member of the Werneth club in the Central League.

He recalls that, when a pupil of East Oldham High School, he and a few of his friends made a practice, on fine evenings, of going straight from school to the nearby ground of Werneth, where they were happy to field for the first eleven net practice in the hope of getting a few tips, and perhaps even a knock themselves.

Rejected for National Service because of slight foot trouble, he turned professional on completion of his apprenticeship

This habit undoubtedly did much to decide the course of Pullar’s life, for he became one of many apt and eager pupils of Eric Dennison, the club professional, a Yorkshire-born left-hander, who was a particularly gifted coach of youngsters. Pullar also remembers with gratitude the help of Mr W. Booth and Mr G. Shaw of the Werneth club and, of course, of Stanley Worthington, the Lancashire coach and his county captain, Cyril Washbrook.

Incidentally, Lancashire have good cause to be grateful to Werneth. Frank Sibbles, a fine off-break bowler, graduated from that club between the wars, and since the last war, Malcolm Hilton, Jimmy Hilton, Jack Dyson and Geoffrey Clayton have all been produced by the club. Another product of Werneth is Keith Andrew, the Northamptonshire and England wicketkeeper.

By the time he was 15, Pullar had earned his place in the Werneth first eleven, not only as a batsman but also as a leg-break bowler, an aspect of the game he has now forsaken. Soon Major Rupert Howard, the former Lancashire secretary, saw the young left-hander do well against Vinoo Mankad of India, bowling for an opposing League club.

In 1952 he played for the Lancashire Young Amateurs and two years later, when he had left school to become apprenticed to the jewellery trade, Pullar made his county debut, against Surrey at Old Trafford. Rejected for National Service because of slight foot trouble, he turned professional on completion of his apprenticeship.

Pullar is a talented table tennis player, having won an England junior cap, county honours and a place in international trials. He is also fond of fast motoring.