The seamer Geoff Arnold played a key role when Surrey recaptured the Championship in 1971. His efforts earned him a Wisden Cricketer of the Year award.

One of the cricketers who played a vital part in Surrey winning the county championship after an interval of 11 years was Geoff Arnold, who in the process headed the national bowling figures with 83 wickets at 17.12 runs each.

He was one of the excellent attack Micky Stewart, the captain, had at his command. It was well-balanced with Arnold, Willis and Jackman to use the new ball, Storey medium-paced and three fine slow bowlers with varied spin in Intikhab Alam, Pocock and Waller.

Geoffrey Graham Arnold is a true son of Surrey, born at Earlsfield, not more than three miles from The Oval, on September 3, 1944. He is an all-round sportsman; he still appears as a striker for one of the Corinthian-Casuals FC teams; he trains twice a week throughout the winter with Wimbledon FC and he has a golf handicap of 12 at Bramley Golf Club, near Bagshot where he now resides.

Arnold’s sporting talents were encouraged as a very small boy. His father was a good club cricketer and footballer in the Wimbledon area and once took all ten wickets in an innings. At the age of ten Geoff Arnold was opening the batting and bowling for his primary school at Wandsworth, and when he went to the Elliott School, Putney Heath, he won an Evening Standard bat for scoring 89 not out and taking seven wickets for 26 in an Under-14 match for London Schools against Harrow School at Harrow. Soon he was appearing for South of England Schools and in 1959 he played for the ESCA against Public Schools at Old Trafford.

Meantime, Vic Ransom, who used to captain Surrey Second Eleven, saw him playing for London Schools and introduced him to Surrey Colts as well as to his own club, Malden Wanderers, for whose first team he played for two seasons.

Surrey gave him a trial in August 1961 and the following year they agreed on a contract. Arnold pays tribute to the encouragement he received from Arthur McIntyre, the Surrey coach and Second Eleven captain, who did not change his style, and to Peter Loader who taught him to develop the outswinger – now his stock delivery – as a variation to the ball that comes into the batsman from the off.

He was 18 when in 1963 he made his debut in first-class cricket, against Derbyshire at The Oval, claiming WF Oates, Derbyshire’s top scorer in the match, as his first victim. Wisden remarked that he made a promising start, but he was young and with Loader, Sydenham and Gibson in the side, Arnold figured in only six Championship matches that season. 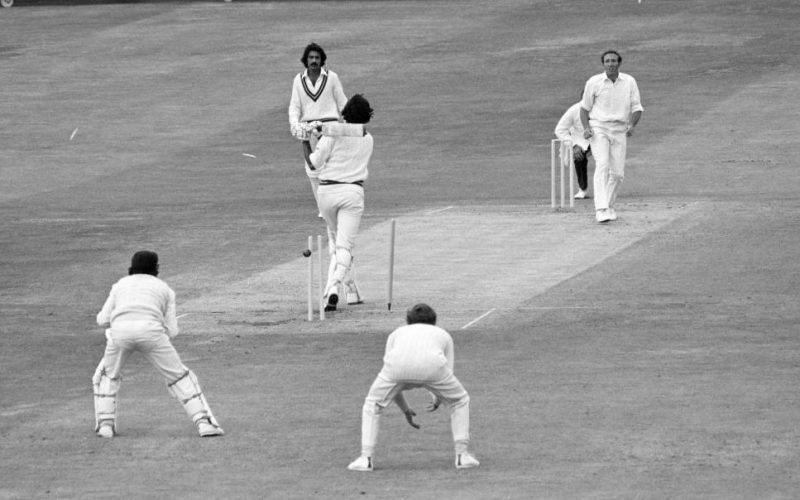 Geoff Arnold knocks over Sarfraz Nawaz at Headingley, circa 1974

Two years later Arnold really came to the fore. He headed the Surrey bowling with 77 wickets for all first-class matches at 17.21 runs each, and he was top again in 1966. Not until 1967 when he took 109 wickets, average 18.22, did Arnold receive his county cap and that same year, having already toured Pakistan with the MCC Under-25 team – he made 73 against Central Zone at Sahiwal – he was chosen for England for the last two Tests against Pakistan.

He distinguished himself at The Oval by taking 5-58 when in heavy misty atmosphere, Brian Close sent Pakistan in to bat. There followed some dull batting by England, but Arnold, with two sixes and six fours, hit gaily for 59, then his highest innings in England and despite that marvellous 146 later by Asif Iqbal, England won comfortably by eight wickets. Arnold’s other Test appearance was in 1969 against New Zealand at The Oval. Then the conditions with rain about suited slow bowlers and Underwood reaped a harvest of 12 wickets.

Here’s what John Thicknesse wrote when Robin was a Wisden Cricketer of the Year in 1981.https://t.co/EKOMUKqmC4#wisdencricketeroftheyear #wisdenarchive

Numerous injuries have dogged Arnold. He missed nearly the whole of the 1968 season when he broke down in the first match at Lord’s after taking five MCC wickets for 29. Following a short rest, he returned at Edgbaston and rescued Surrey by hitting 63, but again his right knee gave way and he had to have a cartilage removed. From time to time muscular pains in the back have hindered him and even in the county trial match at the beginning of last season he dislocated a bone in a foot and missed eight matches, including the Sunday League.

Another problem which he believes he has cured was a tendency to overstep the front crease and to be no-balled, but last June when Surrey went to Guildford for the Worcestershire match he spent a lot of time in the nets getting nearer to the stumps at the moment of delivery.

Normally, Arnold takes a run of 25 yards, but he says the 15 yards on Sundays does not inconvenience him although he would not like to be restricted to that length all the time. These days there is not much pleasure for fast bowlers toiling at The Oval on the slow pitches which now prevail, affording little bounce, and it is significant that of the 83 wickets credited to Arnold in 1971, only 24 were obtained at Surrey’s headquarters.

Arnold lives for cricket. He acknowledges his debt to his colleagues for their great close-to-the-bat catches, and in particular, Stewart, Storey, Roope and Long.

Geoff Arnold is never idle. As soon as he left school he found a job with Wimpey, the building contractors and he is still with them as a draughtsman in civil engineering. His ambition is to keep fit, keep Surrey at the top, and win a place again in the England team.