Dudley Nourse was a key figure in South African cricket either side of the Second World War. His Wisden obituary in 1982 recalled a tremendous career.

Dudley Nourse, made with his father AW, popularly known as “Dave”, perhaps the greatest of all father and son cricketing combinations. “Dave” played 45 times for South Africa between 1902 and 1924 and Dudley 34 times between 1935 and 1951. Of South Africa’s 100 Test matches between the first and the last of these years there were only 21 in which there was not a Nourse in their side.

Dudley first appeared for Natal in 1931 and quickly established himself as a batsman of outstanding promise. Thickset (like his father), with immensely strong forearms, he was as capable of superb stroke-play, as when he scored 231 in only 289 minutes against Australia at Johannesburg in 1935/36, an Australian side that contained Grimmett and O’Reilly at the height of their powers, as of unyielding defence, as when, in the “timeless” Test at Durban in 1938/39, he took six hours to make 103. With the Second World War coming when it did, Dudley Nourse never toured Australia. 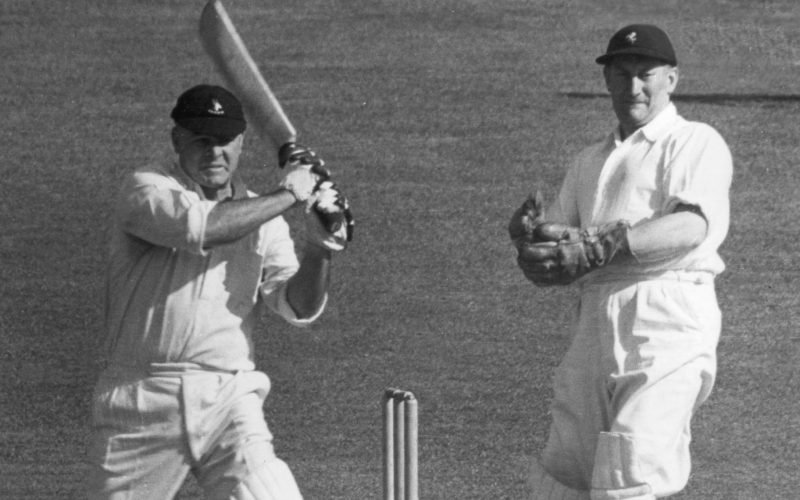 The first of his three visits to England was in 1935 when, although finishing the tour with an aggregate of 1,681 (only E.A.B. Rowan scored more) he made a slow start to his Test career. After failing at Nottingham and Lord’s he was dropped for Headingley, before coming back and scoring 29, 53 not out, 32 and 34 in the last two Tests.

That winter came the first of his two Test double-hundreds. Against W.R. Hammond’s MCC team in South Africa in 1938/39 he scored 422 runs for an average of 60.28. Following war service in the Middle East, he was back in England in 1947, when his contribution to a golden summer was a Test aggregate of 621 runs at an average of 69 and a record third-wicket partnership of 319 with his captain, Alan Melville, in the First Test at Trent Bridge. For England’s next visit to South Africa, under F.G. Mann in 1948/49, he captained South Africa for the first time, Melville having retired and Nourse being his natural successor.

Dudley Nourse, one of the giants of @OfficialCSA, was born on this day in 1910. Read Reg Hayter’s profile when he was a @WisdenAlmanack Cricketer of the Year in 1948 – https://t.co/vylWGvZoMU #cricketeroftheyear

In no way did the extra responsibility affect his form: if anything, the reverse was so. With centuries in the Third Test at Cape Town and the fourth at Johannesburg he scored 536 runs in the series for an average of 76.57, the best figures on either side. The following season, when Australia visited South Africa, he scored 114 against them in the Second Test in Cape Town and once again headed South Africa’s batting averages.

Nourse’s last Test series was when he took the South African side to England in 1951 and, within a few months of his 41st birthday, enjoyed perhaps his finest hour, scoring 208 in the first innings of the First Test, against an attack comprising Bedser (then in his prime), Bailey, Brown, Wardle and Tattersall. This great effort led to South Africa gaining their First Test victory since 1935. Although England won three of the next four Tests, Nourse, upon his retirement soon afterwards, could look back upon a playing career of outstanding distinction.

Related Story: Quiz! Name the South African batsmen with the most Test runs since 1992

Not only was he one of the most gifted and successful of all South African cricketers: before and after the war he would have had a place in a World XI as well. His special glory was the square-cut; but there was no shot that he could not play and he was as nimble and punishing against spin bowling as he was fearless against speed.

In all first-class cricket he scored 12,472 runs, including 41 hundreds, at an average of 51.37. His Test figures were 2,960 runs, average 53.81. He hit six double-hundreds, one fewer than his father, who holds the South African record. Quietly spoken, firm of purpose and a man with the highest personal standards, Dudley Nourse was a figure of national respect in South Africa. After his retirement as a player, he was a selector for some years and managed D.J. McGlew’s side to England in 1960. An autobiography, Cricket in the Blood, appeared in 1949.