Clarrie Grimmett was one of a trio of great spinners to represent Australia between the wars. On his death in 1980, Wisden asked another member of that triumvirate to pay tribute.

Born in Dunedin in the South Island of New Zealand on Christmas Day, Clarence Victor Grimmett must have been the best Christmas present Australia ever received from that country. Going to Australia in 1914, on a short working holiday which lasted for 66 years, he joined the Sydney club, which had its headquarters at Rushcutters Bay.

Three years in Sydney District cricket were sufficient to warn him that Arthur Mailey, another great spinner, had literally been given the green light towards the New South Wales team and all fields beyond. This, and marriage to a Victorian girl, took Grimmett to Melbourne, where he played with the South Melbourne club. During his six years in Melbourne he was given only three invitations to play for Victoria, the third of which was against South Australia when, providentially, he collected eight wickets.

It was after his visit to Sydney with the Victorians, for the first Shield match after the Great War, that I managed to see him for the first time. In Sydney, in the match against New South Wales, Ted McDonald had performed outstandingly for Victoria and was consequently the cynosure of all eyes when the Victorian team, on its way home to Melbourne, played an up-country match in the mountain city of Goulburn.

Not quite all eyes, however. The attention of one pair, belonging to a 13-year-old boy named O’Reilly, was riveted on a wiry little leg-spinner whose name on the local scoreboard was Grummett. To me, from that day onward, Grummett he remained, and my own endearing name for him throughout our later long association was Grum.

We played together for the first time in an Australian team at Adelaide against Herbie Cameron’s South Africans in 1931, and for the last time in the Durban Test of 1936 when Vic Richardson’s Australian side became the first ever to go through a tour undefeated – a feat paralleled by Bradman’s 1948 team in England. On that 1935/36 South African tour, Grum set an Australian record for a Test series with 44 wickets, yet he came home to be dropped forever from the Australian side. He was shoved aside like a worn-out boot for each of the five Tests against Gubby Allen’s English team in Australia in 1936/37 and he failed to gain a place in the 1938 team to England, led by Bradman. 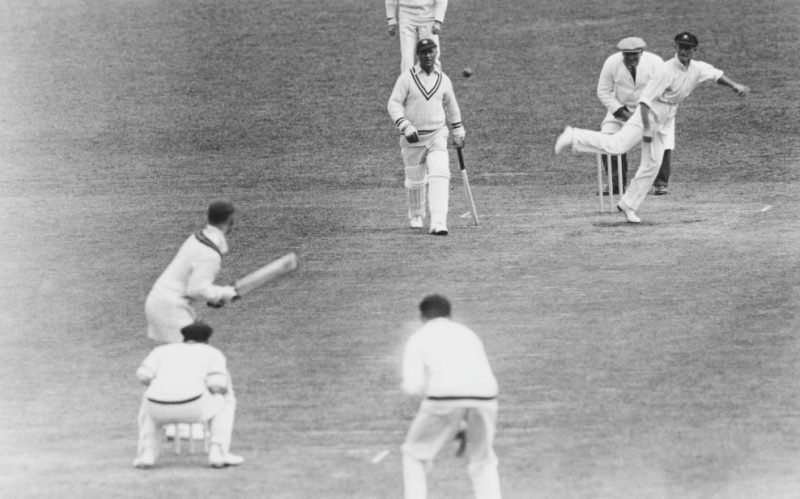 Grimmett bowling against Essex in Leyton, circa 1931

It was illogical to assume that age was the reason for his discard. He was 47, it is true, when the touring side was chosen, yet two years later, at the age of 49, he established an Australian record of 73 wickets for a domestic first-class season. Which raises, rather pointedly, the question of why the hell was he dropped?

By now Don Bradman was Grimmett’s captain for South Australia, and also Australia’s captain. As such he was an Australian selector, and Bradman, it seemed, had become inordinately impressed with the spin ability of Frank Ward, a former clubmate of his in Sydney. It was Ward who was chosen for the first three Tests against Allen’s side in 1936/37 and who caught the boat for England in 1938. Bradman, it seemed had lost faith in the best spin bowler the world has seen. Grum’s departure was a punishing blow to me and to my plans of attack. His diagnostic type of probing spin buttressed my own methods to such a degree that my reaction to his dismissal was one of infinite loss and loneliness. 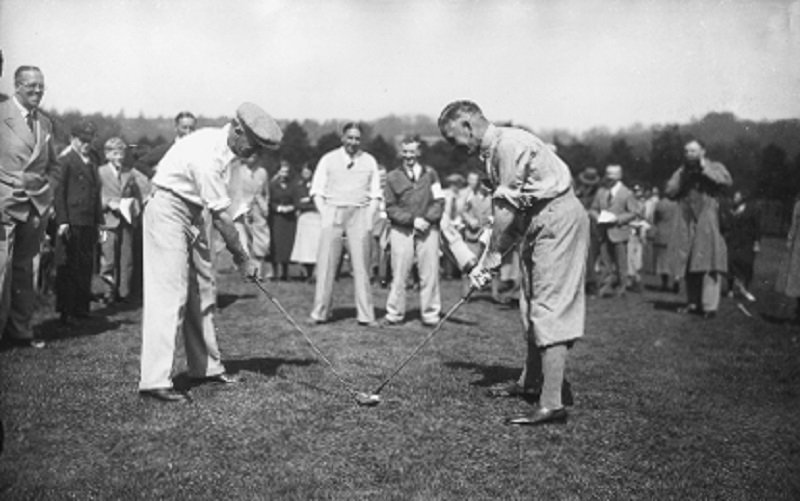 Grimmett and Arthur Mailey play a round of golf at the West Kent Club in Bickley, circa 1934

Unlike Arthur Mailey, the first of the Australian spin trilogy of the inter-wars era, Grimmett never insisted on spin as his chief means of destruction. To him it was no more than an important adjunct to unerring length and tantalising direction. Grimmett seldom beat a batsman by spin alone. Mailey often did. I cannot remember Grimmett bowling a long-hop, whereas Mailey averaged one an over. So much, in fact, did inaccuracy become a feature of Mailey’s success that he himself came to believe that it was an essential ingredient. Such wantonness was anathema to Grimmett, who believed that a bowler should bowl as well as he possibly could every time he turned his arm over. And Grimmett was perhaps the best and most consistently active cricket thinker I ever met.

He loved to tell his listeners that it was he who taught Stan McCabe how to use his left hand correctly on the bat handle – and I never heard Stan deny it. The flipper was originated by Grum during that Babylonian Captivity of his, and he used it to good effect in his record-breaking last season before the Second World War. He passed it on to men like Bruce Dooland and Cecil Pepper. He seldom bowled the wrong ’un, because he preferred not to toss the ball high. On hard, true pitches he would bowl faster than his usual pace, taunting good batsmen to get to him on the half-volley. He was a genius on direction, and his talent for preying on a batsman’s weakness was unequalled. He never let a batsman off the hook; once you were under his spell you were there to stay.

One wonders what colossal figures he would have amassed had he played all his first-class cricket in England.

Grimmett joined South Australia from Victoria in 1923, just in time to bowl his way into the final Test in Sydney against Arthur Gilligan’s 1924/25 England team. In his baptismal effort he took eleven wickets. In 79 Sheffield Shield games he tallied 513 wickets, an Australian record that will probably last for ever. The most successful Shield spinner in modern times, Richie Benaud, totalled 266 wickets in 73 matches, a relatively insignificant performance. Of Grimmett’s 106 Test wickets against England, nearly 70 were collected on English pitches in a land where savants say leg-spinners are ineffective. One wonders what colossal figures he would have amassed had he played all his first-class cricket in England. Had he done so, you can be sure there would not be half the present insistence on pacier finger-cutting.

It was lucky for me that I preferred to bowl downwind, an unusual trait in a spinner’s character. It allowed our partnership to develop and prosper. No captain ever had to worry which bowling end was whose. We competed strongly with each other and kept a critical eye on one another’s performances. In Johannesburg in 1936, all-rounder Chud Langton hit me clean over the top of the square-leg grandstand of the old Wanderers ground. Cackling gleefully, Grum left no doubt in my mind that it was the biggest hit he had ever seen. Silently I was inclined to agree. 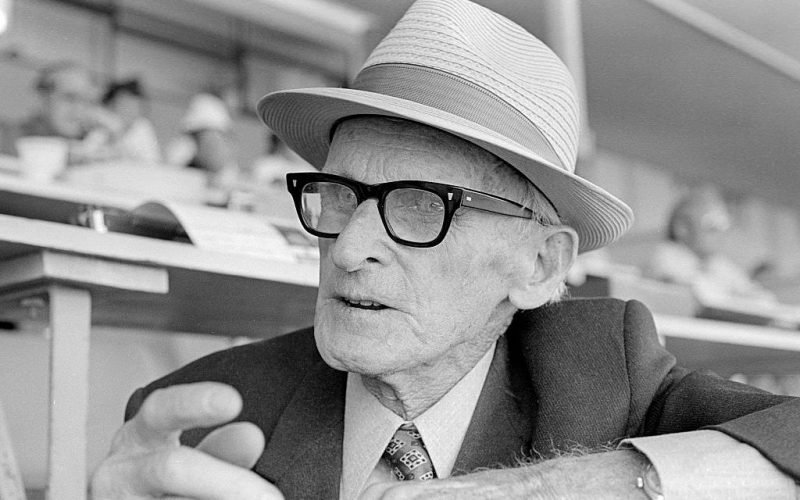 In Clarrie’s next over, Chud clouted him straight over the sightscreen and so far into the railway marshalling yards that the ball was never returned. From that delivery, until hostilities ceased for the afternoon, I never managed to get within earshot of my bowling mate.

Social life meant little to Grum. Not until late in his career did he discover that it was not a bad idea to relax between matches. In England in 1934 I bought him a beer in the Star Hotel in Worcester to celebrate his first ten wickets of the tour. It took him so long to sink it that I decided to wait for his return gesture till some other time on the tour.

Later he told me, with obvious regret, that on previous tours he had been keeping the wrong company and had never really enjoyed a touring trip. That I thought was sad, but not half as sad as I felt when, at the very zenith of his glorious career, he was tipped out of business altogether. With Grum at the other end, prepared to pick me up and dust me down, I feared no batsman. Our association must have been one of cricket’s greatest success stories of the 20th century.