CK Nayudu led India in their first ever Test match against Douglas Jardine’s England at Lord’s in 1932. His leadership skills and all-round performances on the tour earned him a Wisden Cricketer of the Year award the following spring.

Cottari Kankaiya Nayudu, easily the outstanding batsman of the All India team who toured England last season, was born in Nagpur, on October 31, 1895.

As quite a small boy he played cricket for the Hislop Collegiate High School, Nagpur, and in course of time captained the school and college at cricket. He did not confine his activities, however, entirely to this game, for he was very useful at athletics generally, and achieved distinction at Hockey and Association Football. While still at the High School, he assisted the Modi Cricket Club and became captain of it. During these early days he received useful coaching from R Rajanna, who played against the Oxford University Authentics team in India.

From 1916 onwards he played in the Quadrangular matches in Bombay; represented the Central Provinces in 1919 and Madras in 1920.

Everyone who saw him last season could not fail to be struck by the fact that he seemed rather more comfortable on English wickets than most of his colleagues. This was no doubt due to the fact that he had been over here during the previous summer and had played fairly regularly for the Indian Gymkhana. So from personal experience, and from what he had been told by his father and uncle, who were at Cambridge in Ranjitsinhji‘s time, he was to some extent conversant with the conditions for cricket which obtain in this country.

Tall and well-proportioned, Nayudu is eminently fitted by nature to be a good cricketer, and his doings for the Indian team fully bore out the good accounts of him that had come to us by reason of his excellent performances in his own land. Above all else he was a very strong player in front of the wicket, his driving both to the off and on being an outstanding feature of his batting.

For a first-class man, he had one little peculiarity in that he conveyed the impression of being rather late in making up his mind to drive. This, however, did not detract in any way from his skill or effectiveness. Possessed of supple and powerful wrists and a very good eye, he hit the ball tremendously hard but, unlike the modern Australian batsmen, he lifted it a fair amount.

In the course of the tour he played six three-figure innings – five of them against first-class sides – and enjoyed the additional distinction of making a hundred on his first appearance at Lord’s in an important engagement when he scored 118 not out against the MCC. 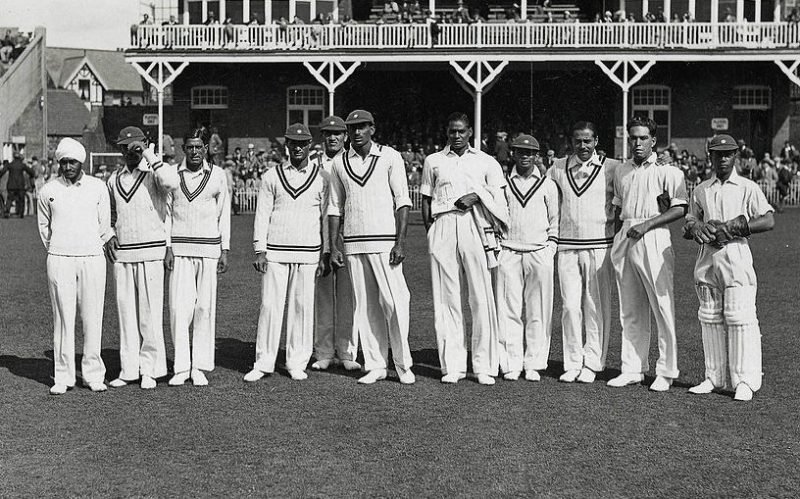 From the personal point of view he was probably disappointed at doing little of note in the one Test match that the team engaged in against England at Lord’s but, captaining the side in the absence of The Maharajah of Porbandar and KS Ghanshyamsinhji of Limbdi, he showed himself admirably suited for the duties of leadership in what were, after all, rather difficult circumstances.

Over and above his batting, he could claim to be a distinctly useful change bowler, rather on the slow side of medium, his best performance being when he took five wickets for 21 runs against Leicestershire.

He was also a very fine fielder, and it was owing to a severe blow he received in the Test Match, when trying to catch Ames, that he could not do himself justice when his turn came to go in against England.

Off the cricket field he had a somewhat retiring deposition and was very modest as to his own abilities, but, able to speak English quite well, he always proved an interesting man to whom to talk about the game. He is ADC to the Maharajah Holkar of Indore.

CK Nayudu led India in each of their first seven Tests – all played before the Second World War. He scored 11,825 runs and picked up 411 wickets from 207 first-class games.