After excelling with leg-breaks in his early years, Charlie Townsend soon recreated that magic with the bat to emerge as a stellar all-rounder for Gloucestershire at the end of the 20th century. He was named a Wisden Cricketer of the Year in 1899.

Except Mr. Grace himself, and Ranjitsinhji, there is no more interesting figure in the cricket field at the present time than Mr CL Townsend. Though only twenty-two years of age, he can already look back upon a brilliant, if somewhat uneven, career, and, given a continuance of good health, the future seems to have every possible distinction in store for him.

A son of that once-famous member of the Gloucestershire eleven, Mr. Frank Townsend, the young cricketer probably began to learn the game as soon as he learnt his alphabet, and he was not seventeen when, having made a reputation as a slow bowler at Clifton College, he played his first match for Gloucestershire, against Middlesex on the Clifton ground in August, 1893. He was then excessively slight in physique and did not look strong enough to bear the strain of three day matches. As to his gifts as a bowler, there was from the first scarcely a doubt. The Middlesex batsmen, with Mr. Stoddart at their head, were loud in his praise, and if only he had been better supported in the field, his first appearance would have been an unqualified success. A little later he took five wickets for 70 runs against the Australians at Cheltenham, and his bowling record for Gloucestershire in four county matches showed an aggregate of twenty-one wickets, with an average of just over 23.

In those early days his powers as a batsman were quite undeveloped, and it was for his bowling alone that he found a place in the Gloucestershire team. From the start of his cricket career he has been that somewhat unusual combination-a right-handed bowler and a left-handed batsman. In the season of 1894 he did nothing out of the common and his bowling, in probably the most disastrous season Gloucestershire had ever experienced, was rather expensive, but in 1895 he jumped to the top of the tree, bowling during the month of August with such astonishing success that had it been necessary at the time to put an England eleven in the field against Australia he would assuredly have been given a place.

His bowling, Mr. Grace’s batting, and the all-round cricket of Mr. GL Jessop combined to raise Gloucestershire from the bottom of the list to a very honourable position-only inferior to that occupied by Surrey, Lancashire and Yorkshire. After playing in the first match of the season Mr. Townsend did not again appear in the eleven until the fixture with Lancashire towards the end of July. From that time till the county programme had been completed he did wonders, and altogether for Gloucestershire, in a dozen matches, he had the marvellous record of 124 wickets with an average of something over 12½ runs each. Even the most experienced batsmen found themselves at fault in contending against his leg breaks, the amount of spin he got on the ball being surprising. As was truly said at the time, there had been no such amateur bowling in England since AG Steel carried everything before him in 1878.

Against Notts Mr. Townsend was peculiarly effective, taking sixteen wickets at Trent Bridge and thirteen at Cheltenham; against Yorkshire at Cheltenham he obtained fifteen wickets and against Sussex at Bristol, Surrey at Clifton and Somerset at Taunton twelve wickets fell to him on each occasion. It must be admitted that he was fortunate in frequently bowling on grounds damaged by rain, but the same thing could have been said with even greater force about Mr. Steel’s achievements seventeen years before. At the same time that he bowled with such success he showed marked improvement as a batsman, playing an innings of 95 against Somerset at Bristol, and scoring altogether for his county 365 runs, with an average of 20. After all the brilliant things he had done the highest hopes were entertained of him in 1896, but unfortunately in that year he did not by any means uphold his reputation. It is true that he took 101 wickets for Gloucestershire in eighteen matches, but his bowling was nothing like so good as it had been the previous Autumn. He had not the same spin and, to an alarming extent, he had lost command over his pitch. Possibly he had bowled too much while still very young; but, whatever the cause, the season of 1896 was for him one of disappointment.

In 1897, he was far from recovering his lost ground as a bowler, but as a batsman he made a marked advance, scoring 643 runs for Gloucestershire, with an average of 25. He made 109 against Yorkshire at Harrogate, but beyond a doubt his finest innings was the 67 not out, with which, within five minutes, of time he won the match with Notts at Trent Bridge. During the past season Mr. Townsend reached the highest point he has yet attained as an all-round player. After winning the Middlesex match at Lord’s by his bowling, he played a series of splendid innings for Gloucestershire, and as soon as he left off making hundreds, he, in the month of August, bowled with a skill that recalled his greatest doings in 1895. 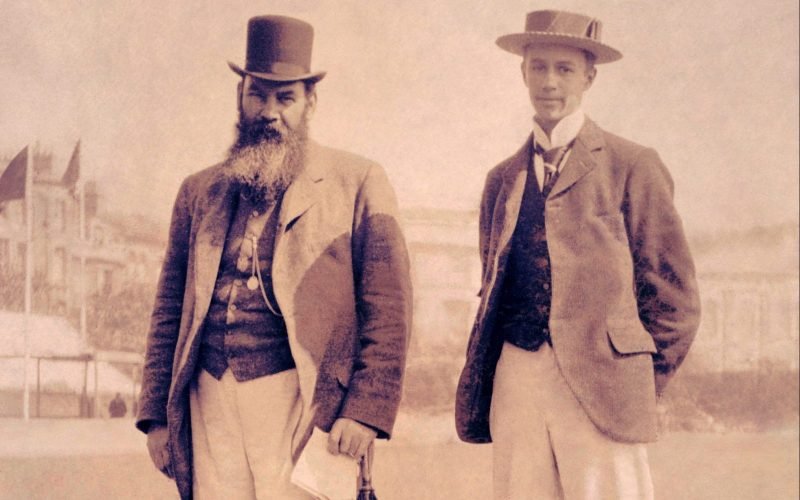 WG Grace with Charlie Townsend, circa 1900

Success probably restored his confidence; but anyway, he combined with great spin almost all his old accuracy. As the result of his splendid labours with bat and ball he had the satisfaction during the year of scoring over a thousand runs in first-class matches and taking over a hundred wickets, a double feat which only two other cricketers in 1898 – Mr. FS Jackson and Cuttell – succeeded in performing. Of the three players, Mr. Townsend had perhaps the finest record, scoring 1270 runs and taking 145 wickets. It may be mentioned as a rather curious fact that though depending on his leg break, Townsend nearly always bowls over the wicket. As a batsman he is, for a left-handed player, exceptionally steady and strong in defence and, though he will never rival Mr. Ford in driving, he has plenty of hitting power.

At different times last season he would have been worth his place in any eleven either as batsman or bowler, and on some occasions he shone in both directions. He had the distinction of being chosen for the first time for the Gentlemen against the Players, at Lord’s, and he has only to keep up his form to earn the still greater honour in 1899 of a place in the England eleven against Australia. Barring the Graces, Gloucestershire has produced no such remarkable cricketer.