The Australia leg-spinner Bob Holland had little in common with Shane Warne, but he enjoyed some great days after a late call-up. His Wisden obituary in 2017 celebrated his life and career.

Late-blooming leg-spinner Bob Holland gave hope to a generation of thirty-somethings by making his Test debut for Australia in 1984 at the age of 38. He took ten wickets in his third match, to end a winning streak by West Indies, and in his next claimed a five-for at Lord’s, which would prove beyond Shane Warne.

Holland was an unlikely destroyer: greying at the temples, he sent down his teasing leg-breaks and googlies from an almost mincing run, with a twirl of the wrist just before he began the upswing of his delivery. Leg-spin was an endangered species at the time, especially in Australia, but Holland had old-fashioned virtues – seductive flight, disciplined length, a well-disguised top-spinner and a sparingly used wrong’un – all dispensed with a ready smile.

That smile might just have derived from the unlikeliness of it all. Although he was born near Sydney, “Dutchy” Holland lived most of his life in more remote parts of New South Wales, and played his club cricket around Newcastle, 100 miles north of Sydney. Rick McCosker, another Australian Test player who grew up away from the bright lights, said: “Dutchy loved his family – he lived for them and his cricket, and he was the epitome of a good Aussie bloke.”

Holland had made his way to the Baggy Green by skill and persistence. From the mid-1960s he was a regular for representative teams in Newcastle. One of his earliest outings was against MJK Smith’s England tourists of 1965/66 – but none for 58 in six overs hardly hinted at a rosy future. He did not play in the Sheffield Shield until January 1979, when he was 32, and his progress was steady but unspectacular until 1984/85, when he took seven wickets in NSW’s match against the West Indian tourists at the spin-friendly SCG. A week later, at Brisbane, Holland became Australia’s third-oldest Test debutant.

He had a quiet start, dismissing Larry Gomes and Jeff Dujon at the Gabba, where defeat spelled a tearful end for Kim Hughes’s captaincy. But he ensured selection for the next Test with a career-best nine for 83 against South Australia at Sydney, and claimed two more wickets in Allan Border’s first Test in charge, although West Indies won heavily again to take an unbeatable 3–0 lead. Holland sat out the Melbourne Test, but returned for the finale, on familiar turf at the SCG.

After Australia batted solidly for 471, he got to work on a helpful, dark-tinged pitch. He took six for 54 – including Viv Richards for 15 – as West Indies collapsed for 163, then claimed four more in the follow-on to finish with ten for 144. It was West Indies’ first Test defeat for more than three years, and their first by an innings since 1968/69. John Benaud wrote: “Bob came out to the fence after a particularly successful over. The crowd rose to him as one, some leaning over the fence, reaching out. Bob took it all in that graceful, dignified, modest way, flashing a grin with a slight wave of the hand that had on it the golden spinning finger.” 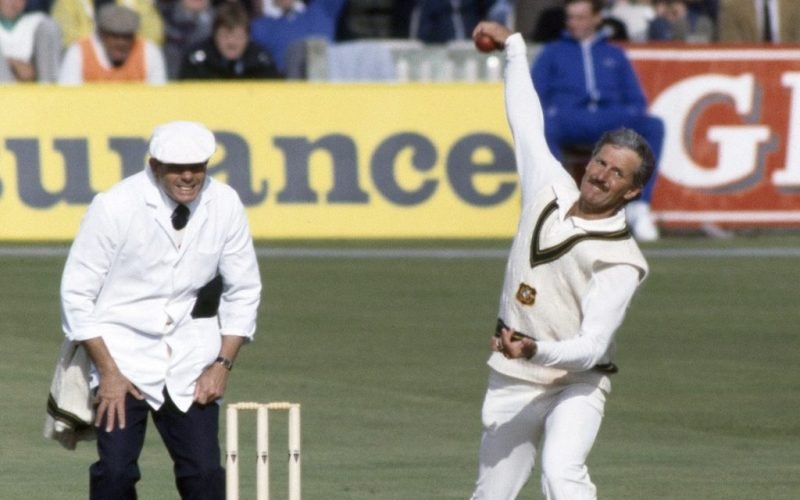 In the 1985 Ashes, Holland’s five for 68 at Lord’s contributed to Australia’s only victory of the series. Wicketless in the first innings, he twirled down 32 tight overs in the second and, after the early dismissal of Tim Robinson, later claimed the last four, including top-scorer Ian Botham for 85. “It was a weird tableau,” wrote Matthew Engel of this cat-and-mouse battle. “A grey-haired leg-spinner from the Nursery End bowling to our bare-headed hero, while fielders in Baggy Green caps hovered and an airship progressed serenely over Regent’s Park. At tea one half-expected the teams to be presented to George V.”

The strength of the home batting saw Holland reduced to a containing role, which blunted his effectiveness as England won 3–1. But back in Australia he grabbed another ten wickets at Sydney, to square the series against New Zealand. Two more caps followed before he bowed out with 34 wickets at 39. Holland finished his first-class career in 1987/88 with a season for Wellington in New Zealand: he was 41, but claimed 31 victims in seven matches, including seven for 69 at Auckland.

He was associated with the Southern Lakes District Cricket Club on New South Wales’s northern coast – as player, administrator, fundraiser, groundsman, junior coach and general organiser – for more than 50 years. Two days before his death from an aggressive brain tumour, the club organised a tribute night, compered by the former Australian captain Mark Taylor. Helped by the camaraderie of family and friends, Holland was able to defy his illness and enjoy one last hurrah.